I’m a huge fan of EA’s NHL video game series. Its realistic controls, deep RPG-like modes, and slick production values offer the closest simulation of real hockey you can get from the comfort of your couch. But sometimes, you just want that old-fashioned, helmetless hockey experience, with simple controls, big crushing hits, and the odd Donnybrook. That’s the premise behind Old Time Hockey. Grab a beer and call up your buddies hockey fans, because this little Indie game, despite its lack of depth, is a barn-burner of a good time.

You’ll notice the visuals in Old Time Hockey right away. Vancouver-based V7 offers a cel-shaded look over photo-realism, evoking the feel of watching a CBC broadcast in the late ‘70s. Text font and old-style wipe transitions add to the nostalgic tone that will strike a positive cord with any fan over 30. Younger players, or those comparing this game to NHL 17, might not be as impressed – your opinion of Old Time Hockey’s look will depend on your subjective viewpoint, but I enjoyed it.

“Your opinion of Old Time Hockey’s look will depend on your subjective viewpoint, but I enjoyed it.”

Commentary, by Matt Baker, is not a strength of the game. I was hoping for a voice more similar to Hockey Night in Canada’s Foster Hewitt or Bob Cole – even a person doing a cheesy impression would have been nice. Baker’s intonation is a bit flat, and the variety of comments is limited. His words are also often well behind the play, so expect to hear him react to your big hip-check a few seconds after you’ve thrown it. On the bright side, there’s a great soundtrack that includes Stompin’ Tom Connors.

There are two major gameplay modes in Old Time Hockey: Exhibition and Story Mode. You should start with Story Mode, which is an extended Tutorial. The “story” is clever and well-written: you are placed mid-season on the Schuylkill Hinto Brews, a bush-league team of career minor-leaguers. Eschewing the NHL star-power of EA’s games, Old Time Hockey instead gives you a rogues gallery of grinders, dusters, and goons. Old-timey player names like “Butch Fenton” and “Lou Petit” make this feel like playing a video game version of the 1977 movie Slapshot. Between games, you’re treated to the off-ice shenanigans the lovable Hinto Brews players get up to – in one episode, a player punches out a mall Santa for calling him “a pussy,” and in another, the team crashes the bus while drunk. V7 has captured the spirit of the bush league days of yore perfectly and I laughed out loud often. 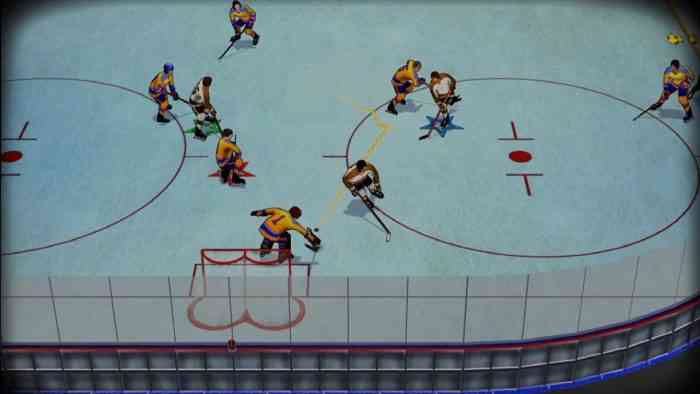 As in Paul Newman’s cult-classic movie, your Hinto Brews (named after the local brewery) struggle to light the lamp, and their goalie is a sieve with a hideous Save Percentage that barely cracks .400. Obviously, winning is not the main goal in Story Mode; instead, you’re tasked with achieving objectives in each tilt, such as completing a number of passes or clotheslining an opponent. Making your objectives, rather than winning, gets you rewards and upgrades. It’s a fun mode that teaches you how to play while entertaining you with its well-written backstory.

On the other hand, if you want to just play a game with a bunch of your buddies over a few brewskies, there’s Exhibition Mode. Play against each other or Co-op against the AI, all in a free-wheeling, arcade style that takes inspiration from NBA Jam or the classic Blades of Steel more than NHL 17. In keeping with the nostalgic tone, you can choose from the Skill Stick or “NHL ‘94” controls that use the X/A and O/B buttons for passing and shooting. Perhaps my favorite idea (although I didn’t actually use it) is the “Beer Mode” that lets you control with one hand while holding a Stubby of Molson Ex in the other (a Craven ‘A’ hanging out of your mouth is optional).

“Play against each other or Co-op against the AI, all in a free-wheeling, arcade style that takes inspiration from NBA Jam or the classic Blades of Steel more than NHL 17.”

Gameplay in both Modes is pure, crazy fun. Laying out your opponents with hip checks and crosschecks will bring out the kid in you all over again, and Old Time Hockey is as much about the physical battle as the scoring. It’s a fresh take on hockey that has been missing in video games of late, and the added cartoony sound effects and even little tweety birds circling a player after getting their bell rung will keep you playing – and laughing – for hours. 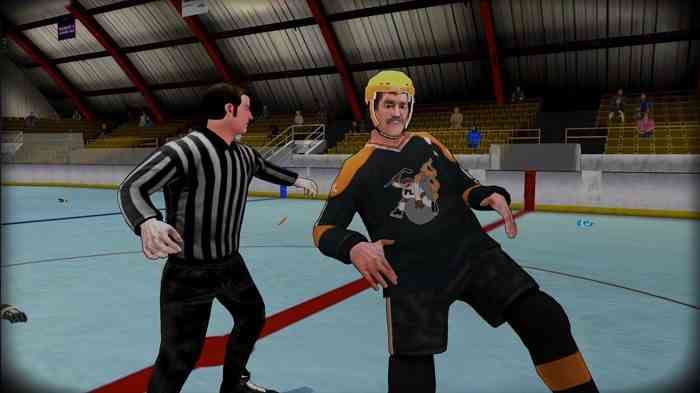 And when enough hits have been doled out, players on both sides get little red fist icons above their heads. Press the Circle/B button and they’ll drop the gloves – that’s right hockey fans, we have ourselves a Donnybrook! Expect to be treated to lots of bloody bench-clearing brawls, and you’ll love the fighting as much, if not more, than the actual hockey game.

“Old Time Hockey is not an ultra-realistic hockey sim, and it’s not trying to be.”

All the good, clean fun of Old Time Hockey helps to hide some of its shortcomings. Besides Leaderboards, it doesn’t have an Online PvP component, so don’t expect to challenge humans on the Internet. There are also just the two aforementioned modes, so players looking for Be a Pro, Be a GM or other simulation experiences will be disappointed. On the technical side, you’ll also see limitations after some play time. Player movement is obviously not as smooth and responsive as NHL 17, and I found my players skated in a slightly wonky, wobbly way that could be frustrating when I was looking for precision. Your players have star symbols under them, a la NHL ‘94, and they fill up when you have the puck. It isn’t always easy to distinguish who has possession, and I sometimes lost the puck in the mass of players on the ice.

Old Time Hockey is not an ultra-realistic hockey sim, and it’s not trying to be. V7 know exactly what they are aiming for – simple, accessible fun – and in that they deliver like a Gordie Howe elbow to the head. Will its raw, simple style keep you coming back to play long after the beer has run out and your friends have stumbled home? That is the bigger question. Regardless, there’s enough good old hockey in this game to make it well worth a shot. 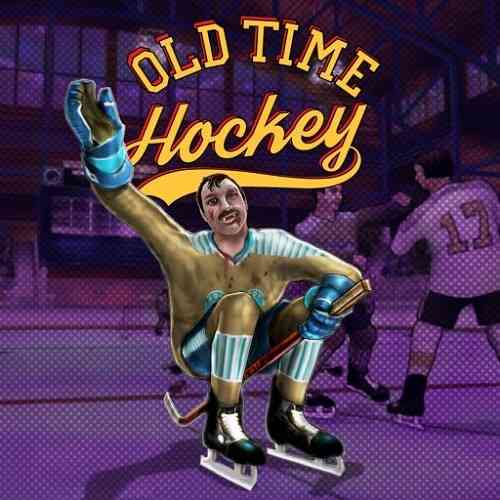