Fans of top-down shooters, gather around and let me introduce you to one of the better twin-stick shooters in recent years. While Livelock features some unfortunate flaws and glitches, the overall experience should be well worth your time.

When a massive meteor threatens to destroy all life on Earth, scientists devise a plan to salvage a future for humanity. First, they transfer the minds of three individuals: a scientist, a soldier, and a cyber-athlete (don’t ask). Dubbed the Capital Intellects, these three individuals would be the first to awaken after the destruction and help rebuild Earth. Then, the scientists transferred the minds of many civilians worldwide, and stored them in three massive shelters; Tokyo, New York and Moscow (Soapbox moment: Why don’t our fellow Canadian developers ever use more Canada in their games? Why couldn’t one of the shelters be in Vancouver, BC or even developer Tuque Games home city of Montreal, QC?). Lastly, scientists developed and launched an AI, Satcom, into orbit to guide the three saviors when the time was right. Unfortunately, not everything went to plan, so it’s time for the three Capital Intellects to (Live)lock and load!

“While there is variety in the objectives – the actual strategy is always the same; keep killing.”

To begin, you choose one of three “Chassis” (characters), each with their own abilities and strengths. You can have five different “Chassis” save files – which is a nice touch for when you want to play solo or when you want to play with friends. As the game progresses, your Chassis will level up and you’ll be able to switch or upgrade your weapons and alter your look. Upgrading weapons requires Carbon, which you’ll collect off of dead enemies and chests. Gameplay is simple; shoot your way through hordes of enemies from one objective to the next. Sometimes you’ll be required to activate a switch, momentarily stand guard, or simply make your way to the level end. While there is variety in the objectives – the actual strategy is always the same; keep killing. The levels themselves were pretty linear, aside from the occasional offshoot for a secret.

The controls are a standard top-down shooter affair. They’re simple and I don’t recall ever having any challenges, even when things got really tense. However, there was one design decision that had me scratching my head. The “X” button had three purposes; reload, skip dialog and pick up/unlock Carbons. The game would often feature dialog between various characters throughout each level, including during fights – but during this dialog, if I “reloaded”, I’d also incidentally skip the dialog. While the dialog wasn’t the most engaging, I was still interested in hearing it. 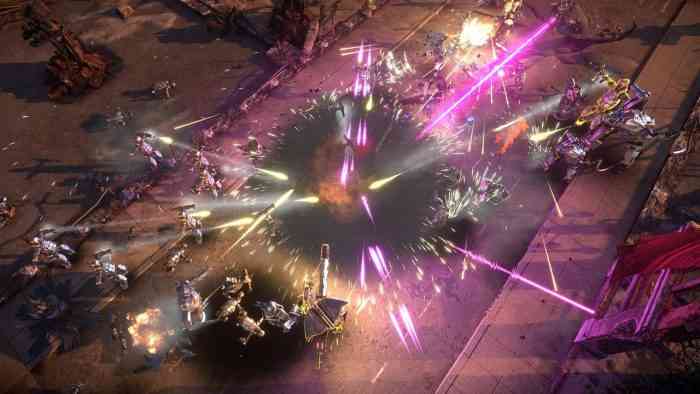 You’ll encounter a vast number of enemies throughout the game, including some enemy variants, like extra large versions, and bosses. One glitch I noticed on numerous occasions was enemies would simply stop moving and attacking for no apparent reason. One of the most blatant moments was a boss fight near the end of the game. The boss (who remains nameless to avoid spoilers) literally stood in one place for the entire fight. I just stood my ground and fired.

The game features the Campaign mode and a Survival mode. The Campaign mode is 20 levels long (each level will take you around 10-15 minutes). You can complete the entire story with up to two friends online (however, no couch co-op, which was a bit disappointing for me). The Survival mode takes place in a number of different environments and allows you to compete against others on a leaderboard for the highest score. Unfortunately, it’s in the Survival mode that I experienced my second most significant glitch. At around the 25-minute mark, the enemies stopped spawning. I must have scared them all away and since I had no way to die, the round never ended. I ended up having to exit to the games lobby and as a result, my score was not recorded on the leaderboards. While I was only playing this mode so I could share my impressions here, if I was playing it competitively, I’d be extremely disappointed.

“The dialog and its delivery is awful and the game has some glitches to work through, but it also features some well designed, fun gameplay – and ultimately, that is what’s most important”

Livelock has a good mix of visuals going for it. The three main characters are well designed, and look a lot like Transformers in their “humanoid” form. The enemies each feature a unique design, in some cases influenced by the location (particularly the Moscow enemies). The bosses were big and intimidating – which made those fights even more intense. The first ten levels had you trekking through various areas in New York – but disappointingly, none of the iconic New York landmarks are ever used. The game also features the occasional cut-scene, which is nicely animated in an Anime style.

The game’s sound is a mixed bag. On one hand, the soundtrack is excellent however the voice work is awful. The NPCs were all AI, and yet all their voices conveyed way too much cheesy emotion in their delivery – which is silly considering the AI really shouldn’t have emotion. Now, I suppose it would have been just as bad if they all spoke in a monotone voice, but maybe the developers could have found a better balance. My first playthrough was with Catalyst, and unfortunately, she had some absolutely awful dialog. I couldn’t stop laughing when she exclaimed, “It’s time to rustle some feathers” (I believe the word you’re looking for is ruffle). Top that off with cliched phrases like “Say hello to my little friend” and you’ll get an idea of why I’m so hard on the dialog and voice acting. One more sound related note: there was no way to turn off the subtitles. Don’t get me wrong, subtitles are vital for every game, but they also need to be 100% optional. 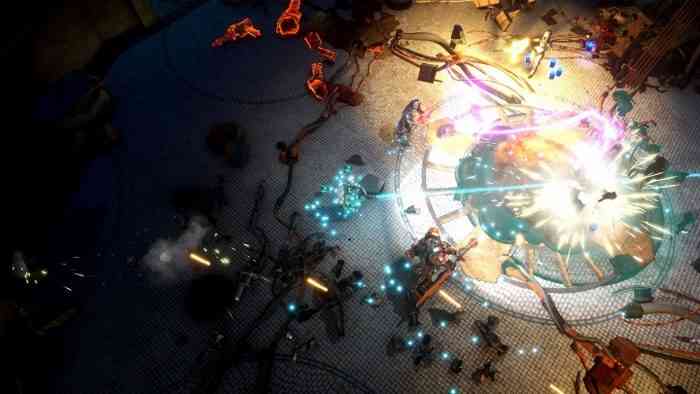 Livelock is a flawed top-down shooter. The dialog and its delivery is awful and the game has some glitches to work through, but it also features some well designed, fun gameplay – and ultimately, that is what’s most important. Being able to have two friends join in the adventure via online co-op is also a huge plus. If you enjoy top-down shooters, you really can’t go wrong with Livelock. Now go rustle some feathers!