Demon Truck Review – Last Longer Than 2 Minutes, I Dare You

Demon Truck proclaims itself as a 666-Bit Cartridge Game and that tells you every thing you need to know. This is a tongue-in-cheek two button arcade shmup with a simplistic playing mechanic but a deep learning curve. Demon Truck is former AAA game developer Jim Shepard’s – (Dungeonmans, Star Wars: The Old Republic, Borderlands, Aliens: Colonial Marines, Quake 4) – baby. He developed and self-published the game.

He trumps the game is hard and he ain’t joking. The main game mechanic to wrap your head around is, what you can’t do. In Demon Truck you play from an overhead perspective looking down on your truck which is on a road to hell – a damnation alley. This is Mad Max Fury Road in a cattle chute. There is no room to regroup. You are condemned to the cab of the Demon Truck challenged to survive as long as you can. You can accomplish this through a plethora of weapons including machine guns, lasers, and rockets. Failing those methods you can go the brute force approach by crushing obstacles or enemies under Demon Truck’s wheels. You have to juggle all this but here’s the catch – the devil is the driver.

“This is Mad Max Fury Road in a cattle chute.”

So you can’t steer. You speed or slow the truck down but that’s it. It’s halfway to the Outer Limits. You get to control to the vertical but not the horizontal. You have to give the devil his due though, he will do his best to avoid obstacles but he is not always successful. Fortunately you can use a speed boost to ram your way through and reduce any damage taken on. Well timed speed boosts will earn you vital power ups that will extend your longevity. Figuring out what they are and when to execute speed boosts is the where the heart of the gameplaying strategy lies.

The other game mechanic to get used but doesn’t feel as confining is that you can’t aim your weapons. They auto-aim for you but you can increase your chances of target lock by using the previously mentioned speed boost to finesse your position to create better chances of success. 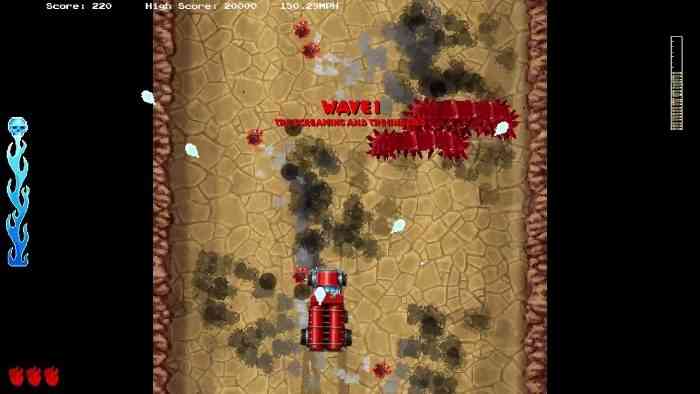 The game is fast, furious, and fun. You wreck all this havoc to the beat of a fantastic soundtrack. New music tracks are accessed as you work your way through each level. Also at the end of each level you are offered the choice between two power up options. If you choose your weapons and strategy wisely; you could make the Demon Truck leaderboard. 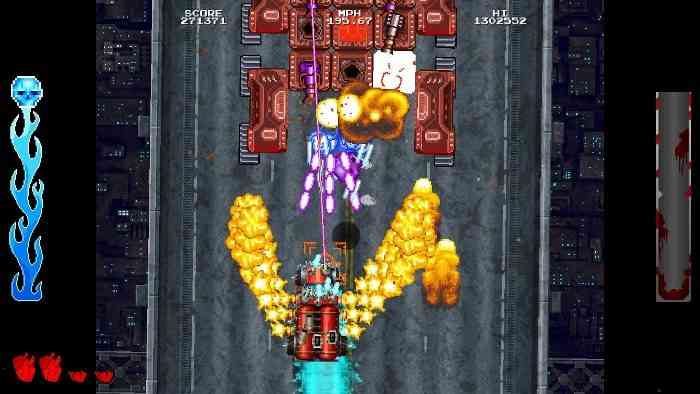 Jim Shepard trumpets that the game is hard and he challenges players to last longer than 2 minutes. The beauty of this arcade game is that you can play multiple games in a very short period of time. For a mere fiver you get a lot of fast and furious fun. 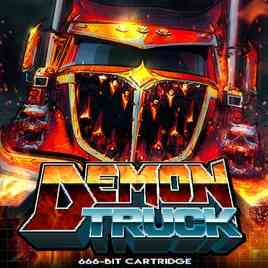