Akiba’s Trip: Undead & Undressed Review – A Game as Crazy as its Title Suggests

Undead & undressed…two words you definitely don’t see together in a sentence often, if at all, let alone in a videogame title. When I first heard of Akiba’s Trip: Undead & Undressed I thought the gameplay consisted of some pervy dude who strictly undressed girls. If you initially asked me the reason for why the girls are undressed, I would tell you in a straightforward manner: “that’s beyond me”. Even though I’m pretty active in the anime and JRPG scenes to understand the various genres and themes behind them, this is one of those games that I wouldn’t have immediately picked up, if ever for that matter; however, I was given the review duties for Akiba’s Trip, and I have to say not only is the gameplay crystal clear now, but the “that’s beyond me” response has been vanquished as well. With Akiba’s Trip first appearing on the PS Vita and the PS3 let’s see what the PS4 version has to offer.

Akiba’s Trip is a beat‘em up game that implements a visual novel-like presentation to guide you through the story. Set in Akihabara, you first begin as the default character and pick what clothes you wish him to wear and you can name him whatever you want. You wake up to find out you’ve been captured and told that you’ve been transformed into a Synthister, a vampire like creature, but instead of sucking blood these creatures suck the life energy out of people. The only way to defeat them is to expose their skin to light, or in other words, strip their clothes off. How’d this all happen? Well, since you needed a job to pay for your figurine addiction you ended up heading to a shady job interview that stated payment would be supplying you with whatever figurines you desire and this is how you got into this crazy mess.  With the aid of a strange girl you make your escape and meet up with your friends to find out what is going on. You become a protector of Akihabara who is being attacked from the other Synthisters and so begins your adventure.

As you may have guessed, the story is meant to be taken light-heartedly. It is humorous, full of fan service, and does get weird at times, but overall it isn’t that bad. A neat feature that’s part of the story is that you have four love interests to choose from that can result in different game endings depending on the responses/choices you make. Some of the choices you can choose had me laughing like crazy while some images or events (specifically one’s that focus on a character’s cleavage or undergarments) didn’t exactly lie in my area of interest, but it still made me laugh over the exaggerated fan servicing. Of course my interests maybe different from your interests so you might love those parts (don’t worry, I won’t judge you). Let’s just say it gives you a worthy enough reason to strip people and progress through the story in a sort-of sane and acceptable matter. There is quite a bit of reading filled with unimportant information that tries to bring the anime world or, in other words, otaku culture to light. This reading can be dry at times especially if you’re not familiar with the anime scene. 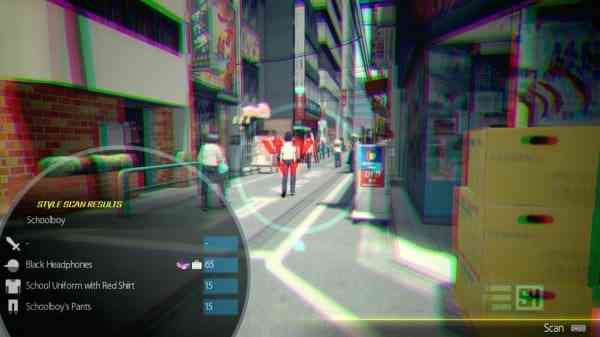 The core elements such as the story, combat, environment, and activities are the same across the PS Vita, PS3, and PS4. In combat attacks are used to damage clothing located on the head, upper body, or lower body of a person until you can rip it off to expose their skin.  A key feature of the game is customization as there are a ton of clothes and weapons to equip your character with. Thus, you’re not limited to your fists as you have the ability choose items such as a body pillow or a keyboard to use as your deadly weapon. You also don’t venture out alone, but with a partner or love interest of your choosing to aid you in combat. Even though it is your goal to strip other Synthisters, the cops do come around to arrest you because violence isn’t tolerated. If you are arrested you’ll get fined, so when you hear a whistle that’s your queue to run.

A really interesting feature is how the environment is designed and set up. There are over a 100 shops that actually exist in real life that are represented in the game. You’ll find the SEGA store and the Gundam Café, while the AKB48 Café is presented as the AKW48 Café. I can only imagine people who have actually walked through the streets of Akihabara would be astonished with this recreation of it. Meanwhile, the streets are full of NPCs just strolling around who all say something if you bump into them. 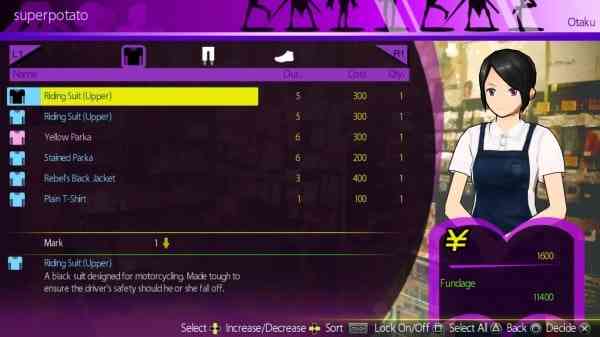 Certain stores can be entered or accessed whether it’s to play a mini-game or purchase clothing and weapons. For example, you can enter a maid café to play a word guessing mini-game. On top of that, your phone holds features such as a camera to take pictures with and the ability to read emails for some extra laughs. There are actually quite a bit of things you can do that aren’t related to the main story that can keep you busy for quite some time which surprised me.

The three new features added in the PS4 version are a viewer’s involvement while watching a livestream, a Visual Editor and a Toybox mode. Taking advantage of the sharing feature of the PS4, people viewing your livestream can manipulate your game in a positive or negative way. This includes making the cops to show up or have a character aid you in battle. The Visual Editor is a neat feature that lets you change up how your game looks. You can make the outline on characters and items thicker, add some fog, or make everything have a certain colour hue. You can make the game look dark and apocalyptic or bright and happy-go-lucky. The combinations are endless. Lastly, the Toybox mode is an option where you start the game with almost everything unlocked. You’ll start off with all types of weapons and clothing to conquer the game, but with a caveat– trophies are disabled and no bonuses for completing the game will be unlocked. 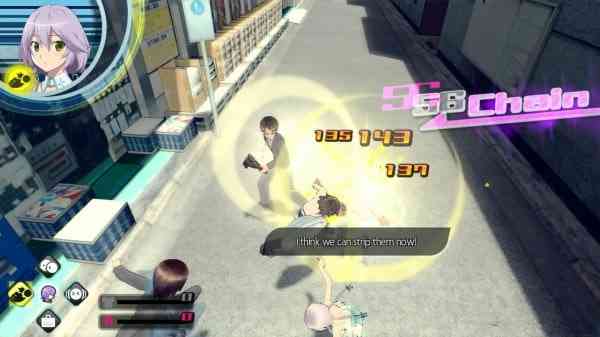 Even though the PS4 version runs at 1080P the visuals aren’t very praiseworthy. The anime videos and picture stills are great, but the actual gameplay visuals aren’t that special.  They do not look much sharper or vibrant and in many ways they just don’t look like they have been improved. Good news though, the framerate issues from the previous versions have been resolved on the PS4 so it does run buttery smooth.

A nice feature is that the game includes both the English and Japanese audio so you can choose whichever language or voice actors you prefer to listen to. Some soundtracks are catchy while others are totally unmemorable. The sound effects are pretty average and didn’t do much justice for the game as the different attacks sound too similar to one another.

Yes, Akiba’s Trip: Undead & Undressed is absurd and yes, it’ll be shocking to many, but aren’t games supposed to be an escape from reality? Maybe this isn’t your type of escape, but it might be for others. I can’t boast too much about the story, but the recreated city of Akihabara and the customization features are definitely something to look forward to. If you’re accustomed to the themes and genres that the anime world offers and you want a humorous and customizable beat ‘em up game, feel free to look into Akiba’s Trip: Undead & Undressed.

Latest Akiba’s Beat Trailer Shows the Allure of Maid Cafés
Next Turtle Beach Stealth 500x Headset for the Xbox One Review – Cutting the Cable has Never Been Easier
Previous Geometry Wars 3: Dimensions Review – Class is in Session, Grade is Awesome