Akiba’s Beat is a visual novel RPG wherein you try and cure people of their delusions before they do damage to the real world. You fight colorful monsters and help people through their problems with the legendary Akihabara setting the stage. The game is a somewhat low-budget experience, with boring (yet in-depth) combat and excellent writing.

My time in Akiba was split between wandering the streets and exploring a series of dungeons. The ‘delusionscapes’ are basic mazes broken up with switches and doors. The appearance and music is always themed according to the uh, the ‘deluser’ who created it. Inside, you fight monsters known as *sigh* deluseons. Look, the writing is mostly awesome, alright? Trust me on this. The localization team went above and beyond the call of duty with a couple tiny exceptions. Doofy names aside, the writing really is a treat. Since Akiba’s Beat is a visual novel at heart, this is a big deal. You’ll do a lot of reading and listening, so it’s essential said writing is interesting. The script is loaded with cheeky humor and fourth-wall breaking nonsense. Normally I’m out of energy for such shenanigans, but the team at XSeed do an excellent job of keeping it fresh and interesting. 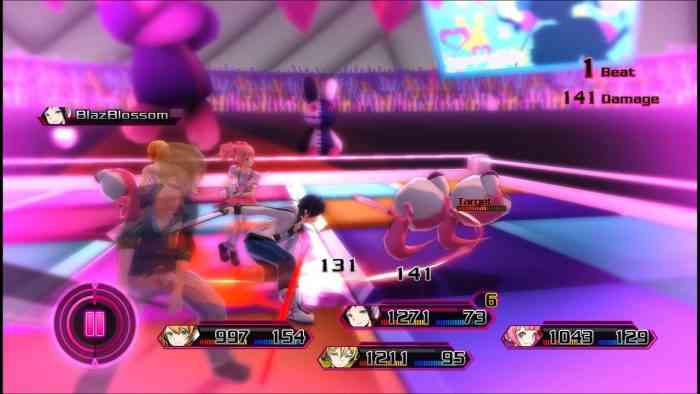 Unfortunately, the combat doesn’t quite get there. At the beginning of the game, you’re asked to choose the difficulty setting. Trust me when I say your ideal setting is a couple notches above what you think it is. There’s a fairly robust system of combos, special meters, and music that needs a high challenge level to really shine. You get access to songs you then set as your soundtrack during fights. Once your special meter hits that sweet spot, bonus damage gets tied to your performance during said song. It’s a pretty clever mechanic that only comes in handy during boss fights. Everyone else goes down way too fast for it to matter. I found out you can the change the difficulty at any time. I was overjoyed at first, only to discover the enemies don’t get harder. Instead, they get more hit points. So if you’re looking for longer fights, you can crank it up to the “Imagine” setting. Otherwise, regular enemies are a breeze at any difficulty.

“The script is loaded with cheeky humour and fourth-wall breaking nonsense.”

This marks one more game wherein I’m out of patience for buying new equipment. My frustration here is twofold, in that I want to see how it looks on the character while wanting it to make more of a difference in combat. Akiba’s Beat falls into that old trap where you’re buying better gear just to spend the time doing so. There’s no significant selection to choose from, and everyone is locked to a certain kind of item for attack and defense. I really wish I could at least parade these guys around in their doofy outfits, but alas. The one concession towards player agency the game makes is the trading cards. For 5000 yen a pop, you can pick up booster packs of cards that come with effects you can equip on your fighters. There’s a limited selection of cards to choose from, but it adds a single level of depth to an otherwise shallow upgrade system. Of course, the downside here is that you can easily spend all of your money on card packs, chewing through your savings to round out the collection.

Your team members are excellent at keeping themselves alive. You needn’t worry about characters dying the moment you relinquish control of them. The downside to this is that they make the game easier. You can set your party members to use skills and items at a specific frequency. You can also decide which skills they have access to, as well as how reckless they are in battle. As for your own battling, there’s a certain rhythm to it I discovered early on. At first, I was getting stomped on constantly. Not killed, mind you, just batted around like a worn-out chew toy. Then, I found a special move that really spoke to me. “Sweep the leg!” it cried out. So I did. Using this relentless wave of basic attacks and low kicks, I was suddenly carving up monsters like deli meat. This is the conceit of Akiba’s Beat. Your experience is less about the thrill of the fight, and more about watching characters you love annihilate enemies in creative and spectacular ways. To this end, you are given a considerable amount of skills to choose from. Once you find your favorite fighter/combo, the game just feels better to play. It’s a small concession, but an important one for fans of the genre.

“Your experience is less about the thrill of the fight, and more about watching characters you love annihilate enemies in creative and spectacular ways.”

Having played the previous entry, Akiba’s Trip, I’m a bit biased about Beat’s graphics. Whereas Trip had actually character models for the NPCs, Beat just uses these faceless stand-ins. They’re fully voiced, but it still feels cheap. Not only that, but there’s something eerie about having a conversation with a light pink mannequin. Trip didn’t have a lot of models for the NPCs, but at least they had faces. On top of that, you can’t customize your party’s appearance the same way you could in the previous game. There are full outfits you can swap out, but I miss giving people a tangled mess of scarves, sunglasses and combat boots to walk around in. It’s unfair for me to just walk past this, so I’ll tip my hat to the voice actors behind the curtain. Akiba’s Beat is indeed fully voiced. Every character you talk to will actually talk. The English voice work is pretty good, too! I know many people just can’t handle that in games or anime, but I implore you to give it a shot. Between this and the combat system, Beat is working hard to differentiate itself from its predecessors.

I’m torn about Akiba’s Beat. On the one hand, there are large sections of the game I simply didn’t enjoy. The character portraits for the visual novel sections move slightly during conversations, which just seems like a tease. The combat has a wide range of options for getting through some very simple battles. I really miss decking out my avatar in ridiculous clothing combinations. Yet, the writing is excellent, the voice acting is on par and the game’s tone is just right. I want to go back and treat Akiba’s Beat like the visual novel it truly is, instead of expecting a full-scale action RPG. That’s the key, there. If you want a story that’s lighthearted while touching on the toxic nature of delusions and the dangers of succumbing to them, Akiba’s Beat will serve you very well. If you want a badass, nail-biting JRPG with all the depth and minutiae this entails, you may want to look elsewhere. This game knows what it brings to the table, and it’s only fair that you do too. 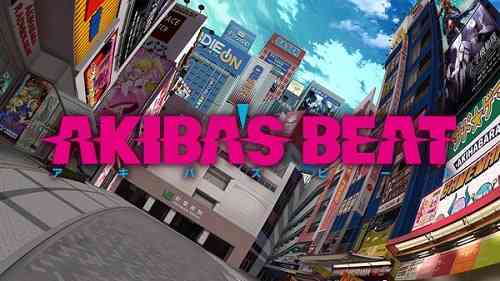