I love Wolfenstein 2. In fact, I nearly crowned it my personal 2017 game of the year. Between the fluid FPS action, stealth scenarios, memorable characters, and impactful storytelling, Machine Games delivered us one of the finest shooters of this generation. Following the conclusion of the main narrative, I immediately found myself starving for additional content. Naturally, I jumped right into the optional side missions granted by collecting Nazi commander enigma codes. I remained engaged for a time but found myself yearning for a continued narrative in addition to the fierce gameplay. Thankfully, part one of The Freedom Chronicles DLC is upon us and it commences with the tale of ‘Gunslinger Joe’, a former rookie quarter back turned beast of vengeance.

I’ll avoid spoilers and spare you the minute details, but the story revolves around Joe’s Hunt for a former American dentist turned Nazi Ubercommander who’s responsible for the death of his father, Joe Stallion. Due to Joe’s unwillingness to comply with Nazi instruction on the football field, he’s enslaved by the Reich. Upon receiving a pep talk from a fellow American prisoner, Joe’s onslaught upon the Nazi bastards ensues.

There are many elements I appreciate about part one of The Freedom Chronicles. First and foremost, I’m a huge fan of small, contained tales within a larger narrative. I adore the main storyline and the characters who support it, but it’s great to participate in another side of the fight. Though Gunslinger Joe and Ubercommander Roderick Metze are less compelling than our primary cast of characters, their stories are certainly unique. I love the idea of a former brute football star taking on an overwhelming force. Roderick Metze is especially interesting considering he’s an American masquerading as a bonafide Nazi. We receive a taste of Nazi sympathizers throughout the main storyline, but never to the extent of Metze. So, bringing him down was notably gratifying. 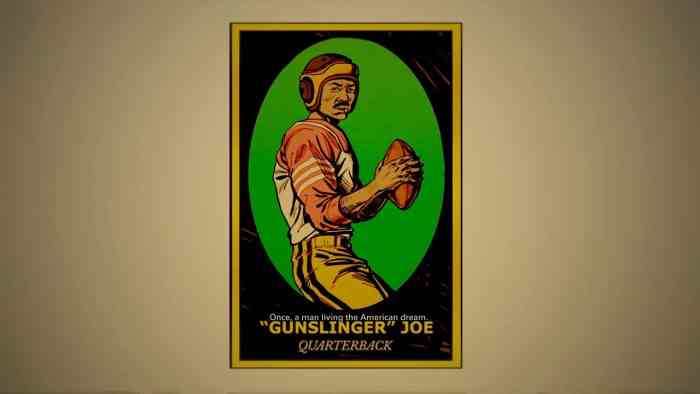 In terms of gameplay, nothing has changed whatsoever, which is quite alright with me. As I previously mentioned, I thoroughly enjoy the moment to moment gameplay and had just as much fun slaughtering the opposition here as I did throughout the eight hours I spent doing it in the main game. If you’ve played Wolfenstein 2 in its entirety, you’re familiar with the enhanced abilities you can choose following a major turning point in the story. Joe possesses the ability to smash through barriers and enemies alike. However, he doesn’t require a specialized body in order to do so. His brute force is all natural. In my initial playthrough of the main game I chose the constrictor vest, as I typically took a stealth approach at every opportunity. Therefore, Joe’s charge ability was totally new to me. I also chose to play part one on the easiest difficulty setting. Wolfenstein 2 is surprisingly difficult, even on a normal setting. So, running, gunning, and smashing Nazis to bits with a lack of challenge was an absolute blast.

“If you love Wolfenstein 2’s gameplay as much as I do, you’re bound to have a good time here.“

Throughout parts 1-3, Joe traverses three settings that you visit in the main game. Although the bulk of the adventure takes place in Springfield, Illinois, it strikingly resembles Roswell, New Mexico. However, this portion of the story was most enjoyable for me. While you merely take a leisurely stroll through Roswell in the main game, you pave the streets of Springfield with a fresh coat of Nazi ashes upon the back of a fire breathing Panzerhund in the DLC. Sure, you can revisit Roswell during an enigma code mission in the main game, but I found Joe’s massacre in Springfield all the more enjoyable as you explore several buildings throughout the small town. Within them are the usual collectibles and various articles, notes, and diaries to read along the way. They’re easily one of my favorite aspects of Wolfenstein 1 and 2, as they’re capable of immersing you deeper within the Nazi occupied world. The notes within Springfield, particularly, provide you with look at how organized sports were altered by the Nazi regime. Joe’s story begins within a Nazi stronghold, which is unfortunately where you spend a majority of the main game and concludes on Venus. I would’ve appreciated exploring all-new locations, but thankfully we have that to look forward to in parts two and three of The Freedom Chronicles, as previewed in episode zero. 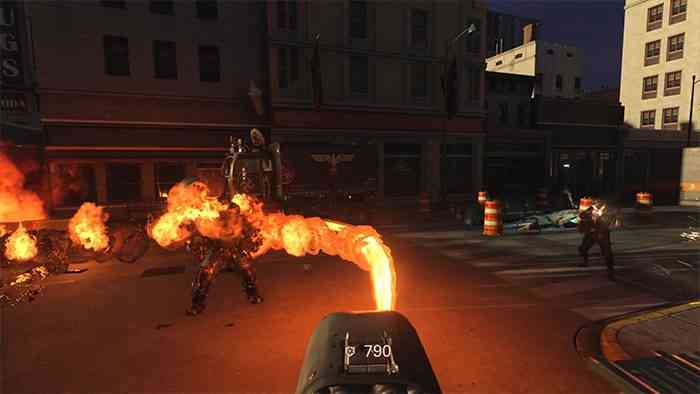 Much of my adoration for Wolfenstein 2’s storytelling is rooted in its visually engaging cutscenes. The Freedom Chronicles sacrifices cinematic scenes for comic book panels and voice over. Some may consider it a step back, but I find it to be an intriguing approach. Sure, the new visual formula may have been substituted due to a limited budget and time constraints, but it works for me. I’m a moderate fan of comics myself, and each of The Freedom Chronicles stories are presented in a bite-size form, similar to an issue of a comic. Overall, Gunslinger Joe’s Chronicle is an enjoyable one. Though I finished it within an hour and a half, it contained a suitable beginning, middle, and end. The characters are all one note but managed to make a considerable impact. If you love Wolfenstein 2’s gameplay as much as I do, you’re bound to have a good time here. In the meantime, I’m stoked for Agent Silent Death’s chronicle in part two. For more on Wolfenstein 2, stay tuned to COGconnected.