Believe it or not, I still can’t get enough of the ethereal world building and remorseless Nazi annihilation in Wolfenstein 2. The Freedom Chronicles shine on with the introduction of Jessica Valiant, otherwise known as Agent Silent Death among those who fear the sharp end of her bloodstained blade. Though I blew through Jessica’s story in a mere hour, I left with a sizable helping of satisfaction and excitement for the future of her character.

Jessica Valiant’s tale progresses the trend of splendid world building set by Gunslinger Joe in chapter one. Her story boils down to a good ol’ fashioned revenge flick, but her mission of exacting that vengeance upon her enemies is one of style and intrigue. Jessica once worked alongside OSA secret agent, Jack Valiant, her husband and spy for the British Empire. Romantically and professionally, the two were inseparable until a fateful day in 1946. During a mission gone sideways, Jack buys Jessica time to escape while he’s taken into Nazi custody. As time passes by, Jessica drowns her sorrows with copious servings of liquor on the beaches of Brazil; that is until she receives a letter from the Crimson Bulldog detailing three targets tied to the death of her husband. Hollywood Nazi collaborator, Chuck Lorentz, the man who betrayed Jack, Ubercommander Hans Stiglitz, his torturer, and the vile General Gerhardt Dunkel, his murderer, all have to die. With mission in hand, it was time for Agent Silent Death to pay a visit to the American West.

To quote Ms. Valiant, at this point “Killing Nazi’s is like riding a bike.” That statement rings true throughout the course of chapter two. Infamous for assassinations, stealth is obviously encouraged. Thankfully, for my sake, that’s exactly how I prefer to play the game. Sure, I enjoy a run and gun bloodbath from time to time, but when any game provides me an opportunity to stealthily approach my enemies, I’m going to take it. Equipped with a silenced pistol and the ability to slip underneath tight spaces, silently silencing Nazis is as enjoyable as ever. I’d had my fair share of stealthy experiences in the main game, so I managed to complete chapter two entirely undetected. Aside from the locations you visit, there’s nothing new here with the exception of a gnarly animation Jessica performs when taking out Nazis from underneath surfaces. You encounter the same versions of enemies you’ve killed a thousand times before and discover weapon upgrades and collectibles along the way. Naturally, the world building is complemented by the documents you can read throughout each mission. The pieces in chapter two are particularly interesting as you infiltrate a Nazi occupied movie studio in Hollywood and revisit the moon during the conclusion. 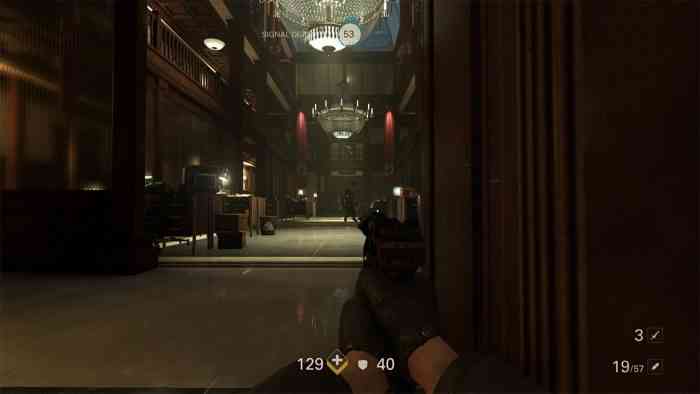 With exception of the moon (which is essentially a chunk of Venus with altered color and lighting), I thoroughly enjoyed exploring the areas of each mission; especially Paragon Film Studios in Los Angeles. Within it you see various sound stages dressed for a multitude of Nazi propaganda films, one of which features a downed fighter plane from WWII. It was a unique setting to tread as I ended Nazis with the silent treatment. Stabbing the cowardly Chuck Lorentz was as gratifying as blasting that bastard dentist from part one. Everybody hates a Nazi sympathizer. The Gestapo office in the first mission isn’t anything you haven’t seen before, but I enjoyed popping skulls while Ubercommander Hans Stiglitz demanded a ham sandwich over the intercom while I was it. A dozen or so headshots later, I gave that son of a bitch my own version of a ham sandwich. Valiant’s story concludes on the moon as she seeks her final target, General Dunkel. Again, the setting feels all too familiar, but the dialogue shared among Nazi soldiers as you sneak about is quite delightful. Coincidently, you visit the lunar base on the anniversary of B.J.’s rampage from the first game. Soldiers speak of their “tragedy” and offhandedly mention the deaths of your previous targets. Not unlike Terror Billy himself, the legend of Agent Silent Death strikes crippling fear into the Reich.

“Agent Silent Death’s vengeful escapade in the Freedom Chronicles DLC is a fun one; especially for fans of stealth.”

A somewhat unique aspect of Valiant’s character in terms of gameplay is her limit of 40 armor. In the narrative, Valiant equips a limited amount of armor in an effort to remain silent as she stalks her prey. Considering Agent Silent Death is a legendary assassin, I believe her character would’ve greatly benefitted with the addition of a signature weapon. I like the traditional suppressed pistol and the extended mag upgrade you acquire is appreciated. But I would’ve loved for her to have had a specialized version of it. Specifically, the addition of an optic and an original design in terms of construction and color scheme could’ve provided a fresher gameplay experience. I also wouldn’t have minded or a twist or two in the narrative. However, Agent Silent Death’s vengeful escapade in the Freedom Chronicles DLC is a fun one; especially for fans of stealth. I admire Jessica Valiant as a character and look forward to her future with the American Resistance in the inevitable Wolfenstein 3.


The Remake of Resident Evil 3 Won’t Have DLC