Reviews are live everywhere for Red Dead Redemption 2 and it is clear critics love the game. We went so far as calling it groundbreaking. Today, we also have for you this video where our main protagonist Arthur Morgan is taking a bath and getting some help cleaning himself from a lovely lady. It’s certainly a ‘steamy’ video… 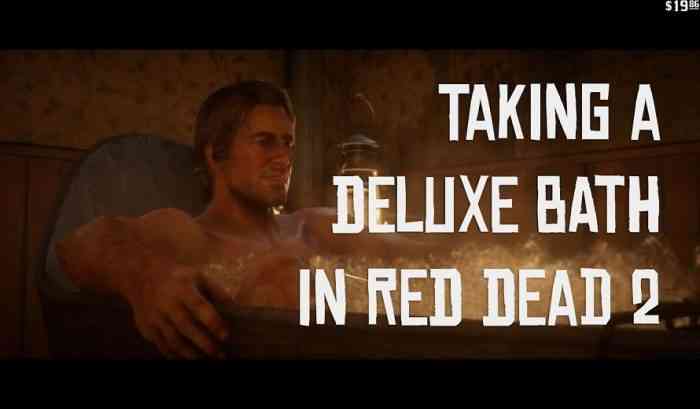 Earlier today, we posted our review for Red Dead Redemption 2 where our man Garrett said: “Whether I’m hunting a legendary animal, participating in a story mission, playing a game of poker, or just exploring the world I’ve absolutely adored every moment I’ve spent with the game. It more than fulfills every hope and desire I’d garnered as my anticipation for it grew over the last several years. The phenomenal narrative and performances are emotionally impactful, and the depth of interactivity embedded into the pristinely polished gameplay is nothing short of groundbreaking. Rockstar have outdone themselves with Red Dead Redemption 2 as it ushers in a new era of what the medium is capable of achieving. At this point, I can’t wait to start again to explore a different playstyle and especially jump into Red Dead Online.”

Enjoy the bath video below:

America, 1899. The end of the Wild West era has begun. After a robbery goes badly wrong in the western town of Blackwater, Arthur Morgan and the Van der Linde gang are forced to flee. With federal agents and the best bounty hunters in the nation massing on their heels, the gang must rob, steal and fight their way across the rugged heartland of America in order to survive. As deepening internal divisions threaten to tear the gang apart, Arthur must make a choice between his own ideals and loyalty to the gang who raised him.

Red Dead Redemption 2, an epic tale of life in America at the dawn of the modern age, arrives for PlayStation 4 and Xbox One on October 26th.