Middle-Earth: Shadow of War Looks Amazing as We Beat the First Story Mission

Beating The First Story Mission in Middle-Earth: Shadow of War

Soon everyone will have a chance to head back to Middle-earth this Tuesday, October 10. Middle-earth: Shadow of War is a brand new open-world action RPG that is the follow-up to the original narrative of the award-winning Middle-earth: Shadow of Mordor. The team at Monolith Productions have created a richer, more personal and expansive world full of epic heroes and villains, iconic locations, original enemy types, more personalities and a new cast of characters, all brought to life through the innovative Nemesis System. Today, we have for you the first mission taken directly from a review copy provided to COGconnected from Warner Bros. 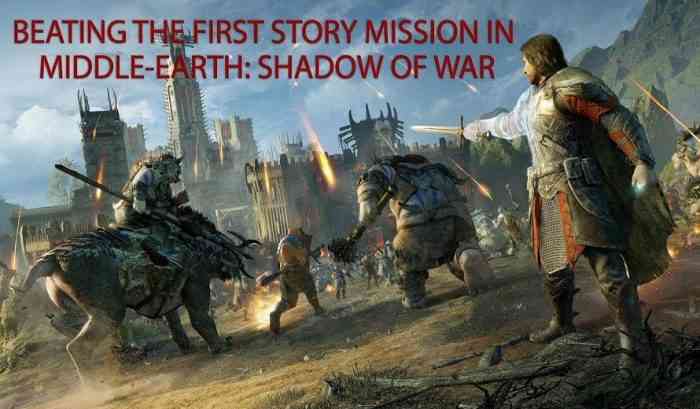 Over the past week or so, our man Grady, has become fully immersed in all that Middle-earth: Shadow of War has to offer. In his official review, he said: “There are so many complex systems and mechanics in place in Shadow of War I could end up talking for hours, but what’s truly impressive about them is how they all work together so seamlessly. Sure, with so much going on it can be a little hard to wrap your head around everything at times, but nothing feels unnecessary. The open world may not be as packed full of tiny details as some other big titles, but because of these intricate systems, it feels just as engrossing nonetheless. Shadow of War improves upon its predecessor in nearly every conceivable way. The story is more engaging and full of fascinating characters, the Nemesis System has been fleshed out to feel deeper and less formulaic, and all the additions to combat and progression are more than welcome. It may not be canon, but this is without a doubt the best game to take place in Tolkien’s expansive universe.”

Let’s take a look at Grady beating the first story mission in the game:

In the game, the longer you play, the more you’ll be able to develop your own personal stories of loyalty, betrayal and revenge all made possible by those you choose to be Followers and those who become your Nemeses, as well as the Nemesis Fortresses, which provides entirely new ways to experience the dynamic world.

Are you picking up the game on Tuesday? Tell us in the comments below.