Medieval Europe has been portrayed in countless strategy games, but never like this. Crusader Kings 3 is the latest entry in a long-running series of genre-bending PC games, and one that elevates it past anywhere the series has gone before. With much more approachable gameplay, a sophisticated new “stress” system and an impressively large map, we feel confident in declaring this the best Crusader Kings so far. To find out more about what makes this game so special, just click play on our video review below.

In Crusader Kings you don’t play as a character, you play as a dynasty. When your character dies, you continue on as their heir, and you keep continuing on until you run out of family members. There’s no predetermined win condition, you just keep on scheming and fighting and building and dealing until 1453 or your whole family dies, whichever happens first. There are ways the game tracks your score, but the game has grown to be more of a story simulator than a strategy challenge. Take one part Civilization, one part The Sims, a helping of Game of Thrones, and then remind yourself that losing can be as fun as winning and you’ve got the basic recipe down.

It’s impossible to pare Crusader Kings 3 down to one significant improvement. Nearly all of the game’s many interacting systems are based in part on something that came in an earlier installment, but everything is tighter, better presented, easier to understand, and more fun to play with. For example, in Crusader Kings 2, ‘stress’ was a trait your character could obtain that worked just like ‘lustful,’ ‘generous,’ or ‘one-eyed.’ Stress would negatively impact your stats and could evolve into the more serious ‘depression.’ In CK3, stress is now tracked on a meter like HP would be in other games. Your character’s main source of stress comes from acting against their other traits. So if you send a shy character on a diplomatic mission, that will build stress. By turning stress into an ever present concern, the game makes all decisions more interesting, and it forces you to roleplay in a way that CK2 never did. 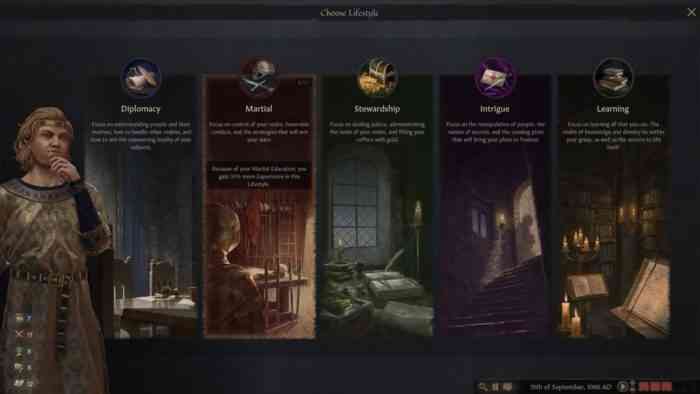 CK3 doesn’t feel like a strategy game with RPG mechanics grafted on, nor is it entirely an RPG. Instead, you are playing something unique, a genre of game we don’t have a word for yet. It’s clear that Crusader Kings is not a game for everyone, being dense, complex, and sometimes slow or overwhelming. But there’s a magic here, a storytelling generator that you won’t find anywhere else. Not only is it a strange and wonderful experience, but it also promises to grow more exciting with future updates. You can’t get your Crusader Kings fix anywhere else, and Crusader Kings 3 takes the series to new heights.