Once in a while a game comes along that doesn’t try to break the mold, doesn’t want to reinvent the wheel, it wants to re-educate the latest generation of gamers on what defined gaming as a whole during its inception. Ask any gamer in their thirties and forties and they will tell you that Contra was most likely one of the defining titles of their childhood, so what style of game to reintroduce to todays gamer? Blazing Chrome functions as a love letter to the classic arcade game about balls to the wall action, co-op shooting mayhem, and one hit kills. This loving homage is lovingly put together with so much nostalgia in mind that it can be easy to forget just how punishing those games could be. Curious what that means? Check out our video review below.

Blazing Chrome is set in an apocalyptic future where robots have risen to power and threaten to dominate life as we know it. You’ll start the game with two characters – a human and a robot – but soon unlock a few more characters to wage war with. The game offers classic shooting mechanics with guns only able to aim in eight directions. Players will traverse the progressively intense levels with only one hit point to try and come out on top. encouraging the trial and error the arcades had ground into our brains. While this can be a great trip down memory lane, we as gamers have grown accustomed to an easier style of gameplay so this might not necessarily be the best for everyone, but if you are missing that sweet feeling of intense 80’s combat, this is just the game for you. 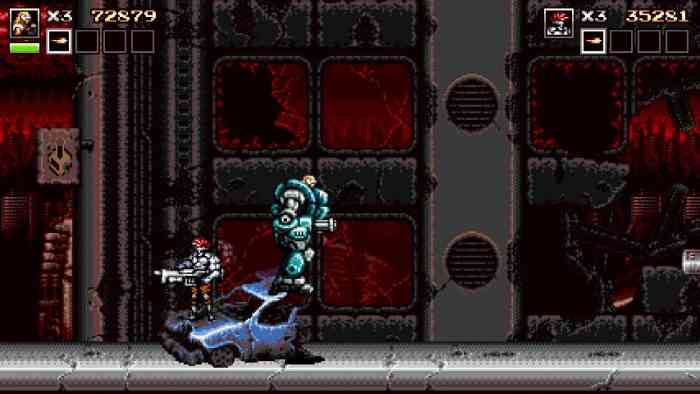 Blazing Chrome is available now on PC, PlayStation 4, Xbox One, and the Nintendo Switch. For more information check out the game’s official website.