“I think we’re going the right way…” We are Wheatley. We are. And so is Pinball FX 2 with their latest cross-platform release for Sony with this pinball game.

For some background on pinball in general and what Zen Studios have brought to virtual pinballing, check out my previous pinball review HERE.

As Valve Studios continues to operate on their own wavelength and schedule which is seemingly devoid of any time considerations, fans wait miserably for their next release. HalfLife 3 anyone? Valve games are a double edged sword. They are so damn fine. And they become available so far apart from one another. So a Portal based pinball game is a welcome diversion. It is also such a no-brainer you have to wonder what took so long.

“It is a lovely nostalgia trip to just let the camera pan around the table taking in the settings from both Portal games and listen to the Portal music.”

Zen Studios hits it out of the park with this one. From Wheatley’s opening dialogue in Spanish as the table loads to the pan up from the bottom left corner of the table through Chell’s quarters; the tone of win is set even before you release the first ball. It is a lovely nostalgia trip to just let the camera pan around the table taking in the settings from both Portal games and listen to the Portal music.

It is pretty impressive how many of the Portal game mechanics Zen Studios have been able to incorporate into their pinball version of it. The goal is to activate 6 various stages each of which touch on a gameplay element from both Portal games. From battle turrets to navigating Chell through a series of portals that are activated by hitting the right combination of targets to activating to the blue and orange goop which speeds up or gives jumping capability to the ball and even activating a Multiball option that uses ATLAS and P-Body; this game does a great job with all this mini-games. Get through all six stages and you once again have to face down Glados who makes her presence felt throughout the game with well chosen voice clips. 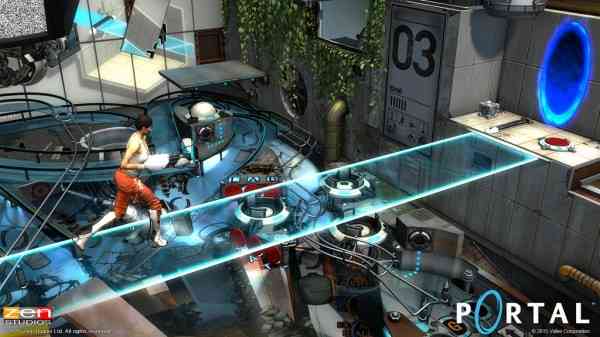 Zen Pinball 2: Portal Pinball is a marvellous experience which makes you want to pull out the Portal games and play them all over again. Zen Pinball fans can absolutely download Portal Pinball with confidence but even those looking to travel down the Portal memory lane will get a kick out of this table. As Wheatley notes, “That’s tremendous!” And so is this pinball game.

Next The Escapists: Alcatraz DLC Review – You’re No Sean Connery but Can You Escape the Rock?
Previous Call of Duty: Advanced Warfare Supremacy Review – Welcome to the Party Bubba Ho-Tep