If you’ve ever wanted to play a Spider Man game in VR then Yupitergrad, out now on Oculus Quest 2 and PSVR, might very well be your best option at the moment. Sure, it’s set on a 1980s-era Soviet space station, but don’t let that dissuade you, Comrade. Offering solid, exciting gameplay and utilizing some creative ideas for VR movement, Yupitergrad is a swinging good time.

Your objective is simple, and really just an excuse to swing and fly around in glorious VR. You are a Soviet cosmonaut who must get a dilapidated space station up and running again after its system failure. In the game’s opening Tutorial phase, you run through a series of obstacle courses to get you up to speed on how to play and especially how to move. Remember that in space, it’s strictly zero-G so you can’t just run around. And jet propulsion is offered as an option but it’s way too slow — no, in Yupitergrad you get funny little suction cups on ropes that you shoot at surfaces and then retract in order to get to your destination, hence the Spider Man comparison.

I must say it’s actually as fun as it sounds. As you learn to shoot and retract your plunger-rope-doohickeys with speed and expert timing, you do feel a bit like the Web Slinger himself. The game has optimized the use of the hand controllers well, so that shooting and contracting is done easily and intuitively; in the case of the Oculus Quest 2 which I reviewed the game on, it was as simple as pressing the trigger button and then pulling back on the thumb stick. Like in any great game that relies on fast movement, using the physical controllers in Yupitergrad feels like an extension of your own body after a short time.

After you learn how to move (and get past the initial phase of just giddily swinging around like a little kid for a while), you realize Yupitergrad is essentially an obstacle-course game with some puzzle elements thrown in to spice things up. You have to navigate passageways throughout the abandoned Soviet station, avoiding various blockages and even some deadly threats. You might have to use your suction cup to open a gate with one hand and then quickly pull yourself through with the other for you to get through it; or, you might have to swing through a very narrow passageway that has spinning blades on either side and would kill you instantly if you touch them. Oh, and to top things off, you can only adhere your suction cup to walls that are light blue. 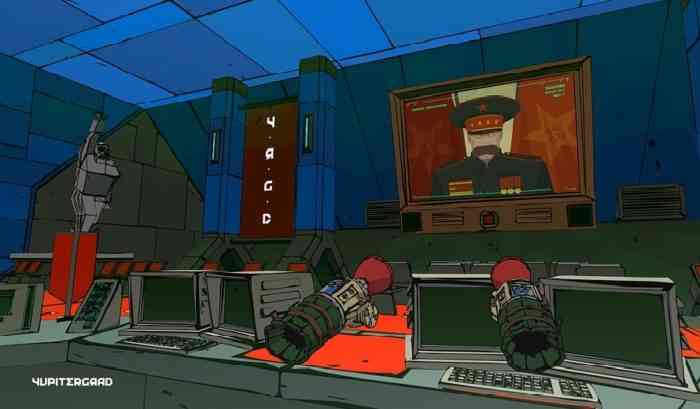 It’s in these delicate and heart-pounding moments that Yupitergrad reminded me pleasantly of another beloved franchise: Indiana Jones. Especially that part in the Last Crusade where Indy has to avoid the circular saw blades to get to the Holy Grail. Your ropes become like Indy’s whip as you hold on for dear life and maneuver through the most delicate courses, executing a series of movements with perfect timing, or risk seeing that dreaded red screen of death. Yupitergrad has some truly thrilling, adrenaline-filled action that will keep you addicted even when it is tough.

And it’s all in immersive virtual reality. And I would go so far as to say that this is a game that would only work in VR. The three-dimensionality adds to the game in so many ways, from the disconcerting immediacy of the dangers you face (those saw blades feel a little too close for comfort) to the exhilarating rush of flying through the space station in 360-degree authenticity. These are moments where you might expect to feel some serious VR-sickness, but Yupitergrad feels better than most VR games I’ve played, maybe due to its smooth rotation option. You might get sweaty and uncomfortable from the death-defying swinging you do, but not because of the VR.

And unlike a lot a of VR titles so far, Yupitergrad gives you a lot of gameplay content. You get a lot of different and challenging levels to complete as part of the main story, but there’s also the Time Attack mode that has been added with the Oculus Quest 2 and PSVR versions. This gives you a series of courses to race through as fast as possible. They have online leaderboards as well, which is cool but I have no idea how other players are finishing a course in 17 seconds when I am taking over a minute on my best day. I know I know – “get gud.”

If I had one gripe about Yupitergrad (and it’s an important one), it’s that its visuals and maybe even its overall aesthetic are pretty drab. I get that the developers are trying to evoke a particular motif here – 1980s Soviet Modernism. But there are a lot of reds and greens and not much else, which I found quite unappealing to look at. The cel-shaded graphic novel look is cool, but I’d like to see a bit more detail and items of interest added to Yupitergrad’s environments. I spent a lot of time on that space station, and I found myself wishing the mostly-bare walls, the computer screens, or even the objects showed more variety to offer my eye an unexpected treat now and then. Maybe even add some more objects in general like Soviet magazines, more propaganda posters, or crates with special perks to help you in the game.

The glum visuals aren’t a deal-breaker though. The gameplay in Yupitergrad makes up for the shortcomings, as the swinging action will keep you hooked. Thanks to a pretty robust main story and the added bonus of Time Attack challenges, it will hook you in for longer than most VR titles. This is a slick title optimized for VR’s unique movement requirements, and it offers lots of fun Spider Man-style content for not many Rubles. Do your duty for the Motherland and check Yupitergrad out.

Oneiros Review – Dreaming of Puzzles in a Puzzling Dream

Exploring in Subnautica: Below Zero is Both Peaceful And Stressful