With the huge mainstream success of Yakuza: Like a Dragon, it seems a bit strange to think that the Yakuza games were, for years, a niche series. Titles would come out in the West a long time after their Japanese release, and only on PlayStation consoles. The few Western fans of the series had to endure quizzical looks from their friends when enthusiastically trying to describe these amazing, strange gangster epics from Japan.

But Yakuza is niche no more. Besides being many critics’ contender for Game of the Year in 2020 (something I never thought I’d see), the entire back catalogue of titles has recently been made available for all platforms. Now the Yakuza Remastered Collection comes to Xbox, and it brings along with it a massive world of quality content, all polished up for the latest hi-def TVs. If you own an Xbox and haven’t yet checked out these games, this is a must-buy.

Out of the three included titles, Yakuza 3 is arguably the best as it represents peak Kiryu Kazuma. Kiryu, for the uninitiated, is the series’ erstwhile protagonist, having been replaced in the most recent game by Ichiban Kasuga. Kiryu is a Yakuza in the spirit of the classic Japanese gangster ninkyo eiga films – tough on the outside, but a big softie on the inside. In Yakuza 3 he battles for power with his rivals in the Tojo clan, while at the same time striving to save his family of adopted orphans (yes, it’s cheesy but that’s what makes it fun).

In Yakuza 4, the series switches up the formula and adds 3 more protagonists to join Kiryu, in a multifaceted story that weaves together by the end. Its climax might be a bit of a let-down but with Yakuza, it’s all about the journey and that is as enjoyable as ever. Yakuza 4 is a bit more serious than 3, toning down some of the more lighthearted aspects and striving for more narrative gravitas. Along with the improved visuals, the remaster brings a new voice actor for Tanimura and a new facial rendering. For those of you who might’ve already played this title way back, this might be an incentive to return for a second look.

But wait, there’s more! You get Yakuza 5 as well, and it might be among the most ambitious Yakuza titles of all. It’s got a whopping five playable characters, and five urban environments to explore (see what they did there?). The narrative pushes the sheer volume of game content almost to the breaking point, and honestly, you’ll have a hard time keeping up with this game’s crowded cast of Yakuza badasses. Driving cab as Kiryu is a welcome blast though, and a nice way to pause from the usual endless street brawls.

Overall, it’s simply astounding how many metric tons of content you get in this package. But the quality has been improved as well. Things purr along at a nice 1080p and 60fps now, which is a welcome improvement over the original versions. Character visuals are upgraded with the remaster, and looking into the perfectly-rendered facial pores of Kiryu and his fellow Yakuza, you’ll almost think these are current-gen titles.

Almost. They still show their age in small ways, for example, those oddly large hands that don’t quite fit the bodies, or the jerky way your character lurches when you try to move them. Cut-scenes look gorgeous, but city backgrounds and buildings betray a blockiness that will pull you out of your illusion at times. Dialogue localization is noticeably better – unless like me you actually got a kick out of the quirky translations in the originals.

For the video game historian, the Yakuza Remastered Collection is a great side-by-side display highlighting the evolution of an iconic series. Even the remaster can’t cover over the fact that movement, visuals, and combat have vastly improved in the latest titles over these early entries. As much as I love Yakuza 3, it’s a bit of a shock to see the way those robotic NPCs shuffle lifelessly through Kamurocho, and going back to using phone booths as save points? Some things are better left in the past. 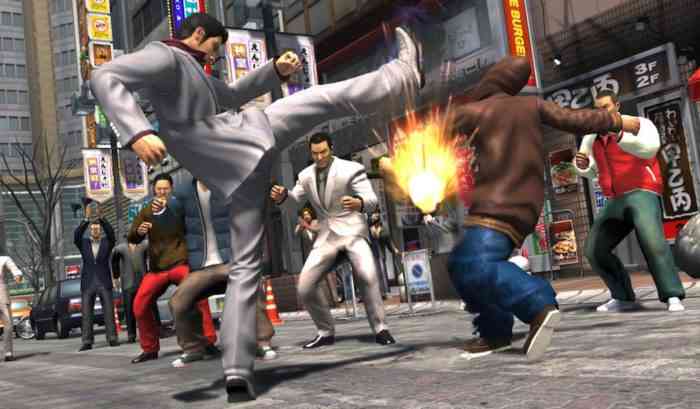 Good and bad, it’s all part of the gestalt that makes this a great and nostalgic package for the Yakuza veteran. Or, if you’re new to the series or maybe have only jumped on board with Like a Dragon, the Yakuza Remastered Collection offers a whole universe of new Yakuza entertainment to discover with fresh eyes. There’s potentially hundreds of hours of game play here, not just in the main stories but also in the side quests and fully playable shops like casinos, hostess bars, restaurants and corner stores. If you’re looking for a huge, living open world to play in, then you’re in for a treat because the Yakuza Remastered Collection gives you at least three of them.

The Yakuza Remastered Collection is not a complete rebuild a la Yakuza Kiwami 1 and 2. While the visuals are much improved over what they looked like as much as 10 years ago, they are definitely showing their age. But with so much story, so many great characters, so many beat-downs to deliver, this is a trio of games that gives you great value for the price (especially if you get it on Game Pass). For series old-timers or newcomers alike, the Yakuza Remastered Collection is a game every Xbox owner needs to check out.