If you recognize Shulk as the teen character from Super Smash Bros. with a range of complicated sword techniques and a boxers-only clothing option, now is your chance to discover his origins. Xenoblade Chronicles: Definitive Edition is more than just a remaster of the cult classic JRPG initially released for the Wii back in 2010. It’s a beautiful remake of the game that features new content, reworked animation and updated graphics that look and feel amazing on the Switch. If you missed the game the first time around and you are a fan of RPGs, you will kick yourself for missing this unique and compelling adventure that rightfully earns its place as one of the best JRPGs Nintendo has ever released.

The story in Xenoblade Chronicles is a classic hero’s journey at its start, centering on an 18-year-old engineer named Shulk and his childhood best friend, Reyn. Their world is situated on the frozen body of Bionis, a gigantic titan locked into a timeless battle against a mechanical titan called Mechonis. Eons ago, the two titans froze into place when their swords pierced one another at the same time, and on their corpses, life eventually flourished. Bionis became home to magnificent landscapes and a humanoid race, and Mechonis went on to harbor the Mechon, a robot race that continues to carry on the battle between the two titans.

After a Mechon assault on Shulk’s home colony, he finds himself capable of wielding the Monado: a legendary sword that, previously, could only be controlled by one other living man in the colony. The Monado is the only weapon that can pierce through Mechon armor, and it also has the power to show visions of the future to Shulk. What begins as a simple tale of an unsuspecting protagonist discovering a unique gift and going off to save his homeland and rescue his loved one, later turns into a deeper and more enthralling story. Though it’s based off a familiar trope, Xenoblade Chronicles is still a fresh take on the JRPG genre that evolves into an experience you can’t help but fall in love with.

Xenoblade provides a well-balanced mixture between open-world exploration and emphasis on combat. You lead a party of up to three characters that vary over the course of the game according to story progression and people you encounter along the way. Though Shulk is the main character and the only one who can equip the Monado, you have the option to make any character of your choosing into the party leader that you control. The combat is done in real-time with action-based commands that utilize each character’s abilities, or Arts. Each party member has an automatic attack that swings or fires on its own so long as you are within range of a target, but the manual Arts require strategy and timing. Activate an Art by mistake, and in most cases, you’ll have to wait out the punishing cooldown times. Each character possesses a Talent Art that is refilled by landing auto attacks, and though you don’t actively control each party member on the battlefield, you are constantly working together and engaged with what the others are doing. 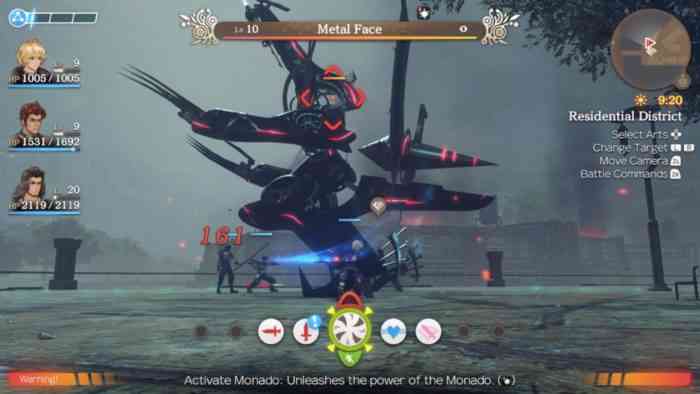 Mobility is a key component of combat, in part because the criteria for many Arts rely on your position relative to the enemy, but also because you are always running over to teammates to encourage them, revive them or warn them of dangers shown by the Monado’s future vision. You also have to keep an eye on you and your teammates’ aggro levels — a mechanic that shows how much attention one character is garnering from enemies — to make sure that your weakest members are protected.

The combat is engrossing and satisfying in most aspects, and it’s extremely fun to strategize and set your party up to be a cohesive killing machine. Don’t expect to succeed at this for a while, though, because there is a lot to take in at first. There are a million tutorials and a ton of different mechanics to make sense of, such as linking chain attacks in your party, sharing skills between members, and the Monado’s future vision. Occasionally, the Monado will pause time mid-battle and show you the enemy’s next move, giving you the opportunity to warn your teammates and plan their reactions before the event occurs. The learning curve doesn’t just stop at combat. Crafting, quick-time events, relationships between your characters, and sharing skills between different party members are all things you’ll have to decipher, and though the tutorials are fairly simple to understand, the sheer breadth of mechanics is enough to make your head spin in the beginning.

Relationships are emphasized in Xenoblade, and it’s very refreshing to see the tangible effects they have on your battle and crafting performances. Each character’s relationship with one another can be built by landing quick-time events and chain attacks in combat, accepting quests, exchanging gifts, and participating in Heart-To-Heart scenes found around the map. Strengthening the affinity between two characters occasionally grants Affinity Coins, which can be used to apply skills from one person’s tree to another’s. Strong relationships also increase your productivity while crafting gems that can be applied to weapons and armor to boost specific stats. Though the dialogue between characters is fairly cheesy and undeniably repetitive when exclaimed constantly in battle, the voice acting itself is charming and believable. 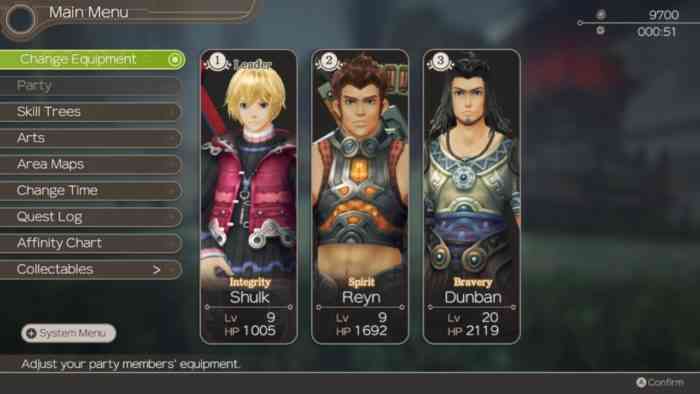 There’s no shortage of things to do in the game, with every major region having an endless amount of quests to pick up. It’s a bit overwhelming how infinite the quest markers seem to be, and everytime I thought I had cleared a region, I would revisit it later on only to find even more activities available. Xenoblade Chronicles is not the type of game where the quests vary greatly in concept; rather, there are a few types of tasks ranging from killing a specified amount of monsters in an area to fetching trinkets and random items for citizens, and you can do these until the cows come home. One feature I did appreciate about these quests is that many of their objectives are dependent on the time of day or even the weather forecast. Civilians lead normal lives and will be unavailable if you try to find them in the wee hours of the night, and certain monsters can only be found in the evenings or during thunderstorms. For those who enjoy extra challenges, there are also portals around the world that will take you to an Archsage who offers timed trials in exchange for a special type of currency. The game does not offer particularly deep or engaging side quests, but there is a lot of incentive to veer off from the main story and complete them since you often find yourself in over your head if you don’t take the time to gain experience and level up.

Technically, I had no issues with Xenoblade Chronicles except for one arbitrary crash. It looks and performs beautifully on the Switch, with graphics that show no indication of its true age. It’s wonderfully done as far as remasters go, and it thrives on handheld just as much as it does on a big TV. The animation during cutscenes is epic and seamless, and the killer soundtrack ranges from grand fantasy scores to awesome rock songs that put you in the battle zone like no other. The fast travel is lightning fast — a much appreciated feature, since many of the regions are far too big and very taxing to traverse by foot. I also greatly appreciate the camera freedom that allows you to zoom out significantly for a broadly tactical view of the battlefield, or zoom in until you’re in first person.

While Xenoblade Chronicles: Definitive Edition does many things marvelously, it is not without a few flaws. I would first caution those who prefer more passive or simple games to take note that this game is very technical and not for everyone for that reason. You spend a lot of time caught up in menus, tinkering with the equipment of three or more characters and leveling up all of their individual skills, or crafting from the countless ethers and cylinders you acquire throughout your travels. The game is also so heavy on the cutscenes that it almost interrupts the game at all of its most climactic moments — typically mid-boss battle, which takes away the sweet reward of finishing off a giant Mechon and leaves you feeling empty at times. 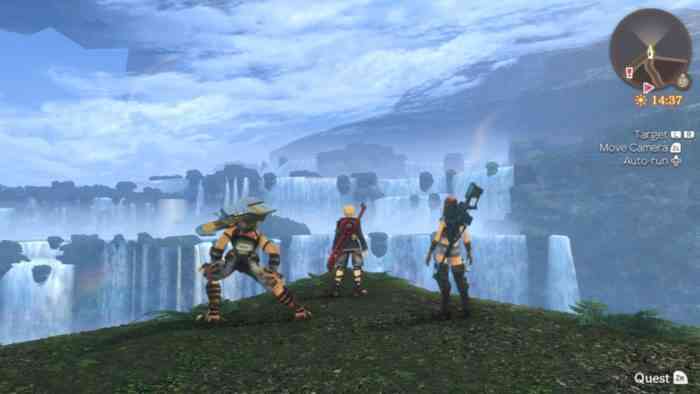 One of my biggest complaints is the lack of freedom to remap the controls. During combat, you must use the D-pad to cycle through your different Arts, and I found this to be clunky and hindering. The battles happen fast, and scrolling through your abilities with the D-pad can be the difference between landing an attack or not, or even between survival and death. Because Shulk’s abilities are so heavily weighted on slashing an enemy from the back or the side, scrolling through the Arts often takes just enough time for an enemy to reposition and foil your plans. I would have much rather assigned this action to the right and left triggers for speed and personal preference, but sadly this was not an option in-game. There is also no way to manually upgrade or improve your auto attack, which I had really hoped for upon seeing how slow most of the characters were in my first moments with the game. In between every swing or shot, the combat animation stops and the characters briefly return to a standing position; staring at the chaos in front of them before coming back to their senses and swinging again. I would have loved to apply some of my skill points to the speed of my auto attacks, but unfortunately we are stuck with the game’s programmed swings for now.

Xenoblade Chronicles is, unquestionably, a game that every JRPG fan needs to play. The combat is thrilling and thoughtful, and even though certain regions feel too large and empty, the world is gorgeous and delightful to explore. There is so much to do and see, and so long as you can hold your own in battle, you can advance at any pace you like. Shulk and his friends are unwavering in their optimism and integrity, and they make for a charming and endearing cast with a story that never fails to move and grow. Certain mechanics are a bit confusing and overwhelming to learn, but overall, Xenoblade Chronicles: Definitive Edition hits the nail on the head in almost every way and adds up to a beautiful adventure that thoroughly deserves your time.