When doing my research, I discovered that Obey Me by Error 404 Game Studios is second in popularity to Obey Me, an anime dating game. This Obey Me is about a demon hunter, Vanessa, who is tasked by her demon overlord to fight through demons and angels with her hellhound, Monty, to carry out a secret mission that ends up with her caught directly in the middle of the war against Heaven and Hell. So, slightly different than an anime dating simulator. While Obey Me has a unique look to it and is quite fun to play, the almost-obnoxious characters and it being a direct clone of Diablo makes this one a tough sell, even at the low price.

A Girl and Her Beast

One of the biggest pros and biggest cons for Obey Me is, as I said, that it is a Diablo clone. For me, it was a big benefit because once I got the controls down in about two battles, I knew I was going to run through this game. I knew what to expect: dungeon crawling, a few locked-in battles that increase in difficulty until the boss — who will be a combo of all the monsters you fought before — and hidden treasures found if you wander away from checkpoints. I mean, the plot is even about warring Archduke Demons and angelic interference in the war. I could almost say the dialogue before it came out at times.

Our fearless heroine is Vanessa, a spunky demon hunter with an attitude who is the key to stopping the demon war. She is accompanied by her faithful companion Monty, a hellhound. Through the journals of Aleister Crowley, you find out that hellhounds used to be Higher Demons who, after making a grave mistake, are turned into hellhounds to run with the bottom feeding demon hunters. I make note of this because while all the other demons have Latin names, his name is Monty, which goes hand-in-hand with the snappy back-and-forth Vanessa and Monty have that plays itself off as humour. It’s not. 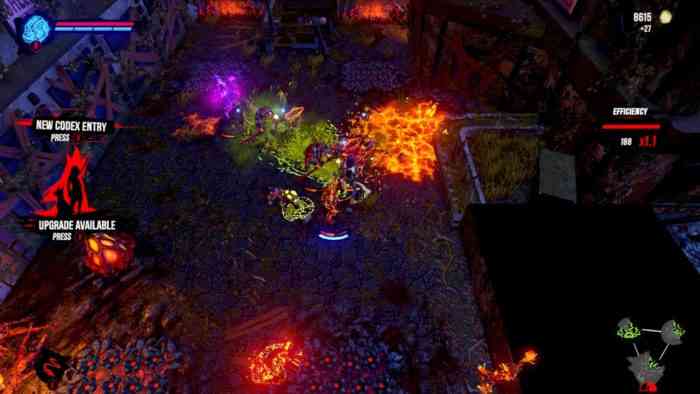 However, it does lead to the co-op section of the game. If you’ve got a friend that can couch co-op with you, they can pick up the controls as Monty and help you tear through the horde at will. While the AI is competent enough to help you through the battles, having another human teaming up always makes quicker work of your foes. In case you don’t have another person to play with you, again, the AI is competent and helps a lot, but it also lets you fully utilize the fusion technique the duo has. It’s weird to use with a friend but if you’re playing on your own, you can charge your fusion bar and merge with your hound to make a stronger hunter. You get a gun, your melee is stronger, you take less damage, and you basically run amok.

The different stages unlock different weapons as well as different modes for your hound. Each weapon has a different strength and if you can master swapping between them, they can be a deadly repertoire. Monty’s modes reflect the weapons you get, so leveling them up accordingly can really boost your effectiveness as a team. The upgrade tree is pretty standard, but padding out the right tree is paramount to you clearing a dungeon in record time or being stuck fighting a boss over and over and over again. 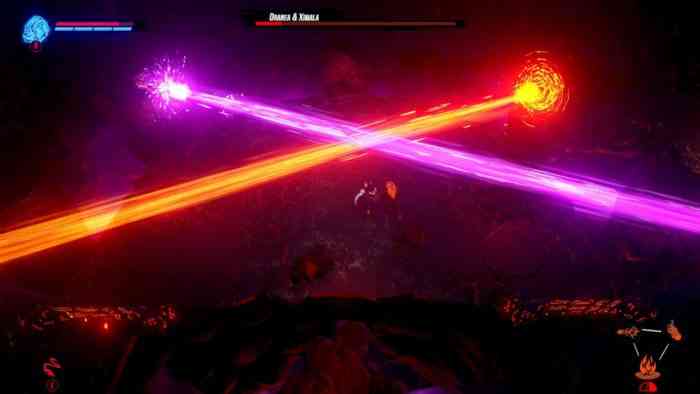 If you’ve played Diablo or any other akin game, you know exactly what this game looks and plays like: Top-down dungeon crawling with a very linear layout and basic controls with one button doing most things. Combining timing and the special skills of each weapon is also necessary to succeed. While Obey Me replicates the dungeon crawling with visual aplomb, the actual dungeons aren’t very pleasant. By the back half of the game, Vanessa is regularly saying “This again?” whenever you get to a new section of a dungeon. There’s usually a snarky comment from the dog to make light of it, but she says it so often that it almost becomes the joke itself. How many times can I possibly run through the same exact combination of flame thrower, spike tower, and explosive mine? Or laser saw, laser beam, and shielded enemies? While the dungeons do have a lovely aesthetic appeal, the redundancy of the maps is frustrating, to say the least.

Obey Me does a lot right to make it a fun play and entice fans of the genre in. The gameplay isn’t overly complicated but it’s still challenging. The dungeons are visually exciting and quite lengthy. They have a scoring system after each battle that will infuriate you if you don’t get the top score. However, the characters are not as endearing as the creators hoped they would be, the dungeons are repetitive, and it’s so close to being a Diablo game … well Diablo 3 is literally right there in my library. If you’re looking for a similar game to Diablo that isn’t just rehashing a game you’ve played a hundred times and you want something with a less bleak tone, then drop the $19.99 on Obey Me. Just know what to expect when you boot it up.