Xenoblade games have always been huge. Massive playthrough times, colossal stories, sweeping themes, and perilous depth are all familiar landmarks for the series. I was expecting all of this. What I wasn’t expecting, was a story with this kind of emotional resonance. I didn’t think I’d find a set of stakes with so much gravity and weight. The bloated, crushing gameplay loop is just what I remember. The clumsy-yet-sincere voice acting fit like a glove. But that narrative? Color me shocked. Xenoblade Chronicles 3 wasn’t quite what I was expecting, in more ways than one.

Our story is set on an endless battlefield. Two factions, Agnus and Keves, are locked in eternal struggle. Each one is burning through legions of lab-grown soldiers in order to shift the front lines in their favor. Said soldiers have a limited lifespan of just ten years. The protagonists are a squad from Keves with roughly one year left before their Homecoming. The stakes are set up immediately, and they are shockingly high. I was sucked in right from the start. Unlike previous entries, I resonated with these people and their plight. War is low hanging fruit, story-wise, but Xenoblade Chronicles 3 handles the setting well.

Tales Of War And Dying Lights

Part of the appeal is character motivation. You know what these people want, how could you not? No one wants to die at ten years old, not when there’s a slim chance to change your fate. Even when the plot gets lost in some strange decisions, that central core remains intact. I won’t go into too many details, of course. But one particular story beat was so baffling the characters had to sit around and explain it for three separate scenes. Don’t worry  Noah, I also didn’t understand that one. 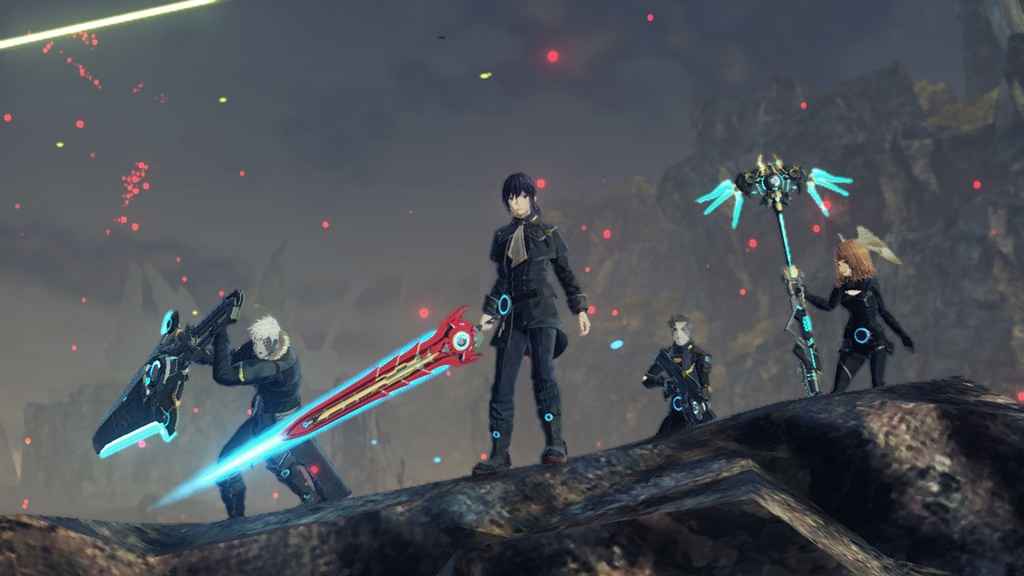 Combat in Xenoblade 3 takes a long time to make sense. This series is famous for throwing a thousand systems at you at once. You’ve got Arts and Fusion Arts to juggle. Then there’s gems to craft, accessories to equip, skills to choose, and Chain Attacks. I’m leaving several systems out, don’t worry. It’s overwhelming, but also boring, somehow. Despite the flurry of activity on screen, you’re mostly waiting for Arts to recharge. Eventually you learn enough to stay engaged at all times, but it’s a slow process. It feels like a pacing problem, to be honest. These combat systems either need to be introduced faster or slower, I can’t tell which. Either way, I struggled to stay focused during a significant chunk of the combat.

Speaking of focus, I also had a hard time staying on the main quest. The optional content is super compelling, you see. There’s just something about seeking out those question marks on the map that I can’t resist. The writing for these quests is extremely okay, but the game makes it easy to seek them out. Not every mark comes with a tangible reward, but that’s just part of the thrill, you know? Thankfully there’s a navigation system that keeps you from ever getting properly lost. I would have gotten in real hot water without that glowing line on the ground. 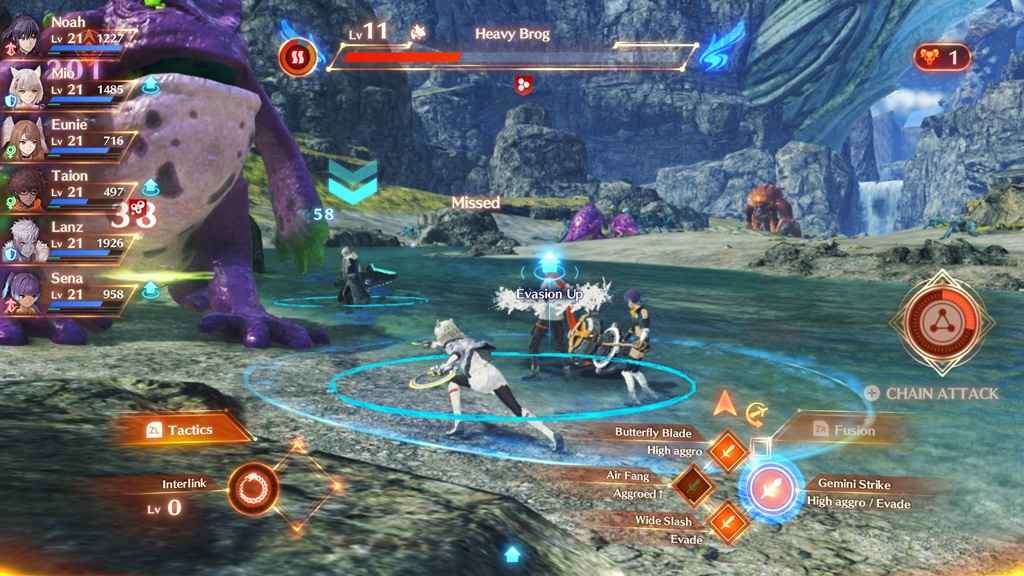 JRPGs, and anime-style ones in particular, tend to have unbalanced visuals. Xenoblade Chronicles 3 is no exception. It seems like all the effort went into the character models and the effects. This leaves the backgrounds and environments looking cheap and flimsy. The difference is so stark it looks like two different console generations mashed into one game. For the most part, you don’t even notice. The action just draws your eye, and the backgrounds stay invisible. Slow paced cutscenes break the illusion, however. Suddenly you’re looking for a little loading wheel behind Mio’s head while she talks.

On the other hand, the music is amazing. The orchestral arrangements do a great job of keeping you emotionally invested. The battle themes are terribly infectious, and even the pause music will stick in your head for hours. Not only that, but music plays a significant role in the story. Thanks to Noah’s role as an Off-Seer, you’re treated to several powerful scenes. The juxtaposition of haunting flute music and floating motes of life force hits every single time. The rest of the soundtrack is great, but those flute themes are fantastic.

I’m still put off by the English voice acting. Don’t get me wrong, the performances are fine! I just prefer the Japanese voice work. I don’t know why, but those British accents yank me right out of it every time. Upon switching, I felt a lot better, except for one detail. The subtitles still have a strong British accent of sorts. It might be better to go English the whole time. The choice is yours, but I suspect the dialogue will feel a bit weird either way. I also recognize that my bias is a very personal one. Just know that everyone is still very British.

Fans of the series know that mecha elements feature heavily in these games. The good news is you get access to said mecha almost immediately! The bad news is that they sort of suck, at least at first. Eventually they get better, but there’s a trade-off you might recognize. The sooner you get access to a cool power, the less cool it is. Although they look amazing, which I appreciate. No, the real game changer are the chain attacks. I ignored the mecha in favor of this system almost immediately. I was about to lose several serious boss fights before a good chain attack turned things around. Another element that got benched? Equipment. Your experience may differ, but I found accessories almost entirely extraneous. I spent several hours forgetting that these items even existed.

This review might seem short, especially for such a gigantic game. There’s just so much I can’t disclose. Bits of the combat and the mechanics of course, but mainly the story. It’s just much better if you experience these things yourself. I will say that this story manages to be both relatable and enormous. You want – almost desperately – to see how this thing shakes out. I wish the combat wasn’t so sluggish at times. It almost obstructs the narrative, having to wade through these disconnected battles. But the quest system is engaging, and the battles do eventually make sense. The writing is great, and the voice acting is getting better with every game. Xenoblade Chronicles 3 is a gigantic, epic adventure. It’s also bloated, hyperactive, and easily distracted. It’s beautiful but flat, it’s weird yet familiar. If you’re looking for a massive new JRPG, the latest Xenoblade game is here for you. 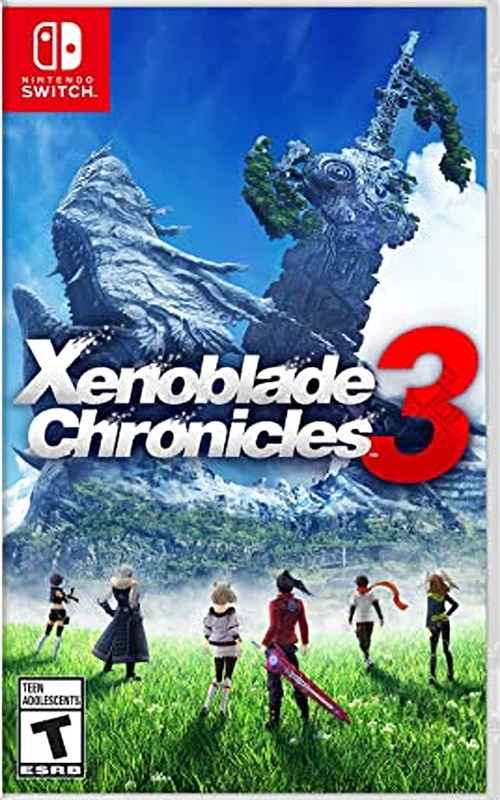