One of the age-old games you never hear about anymore is Battleship; the tactical tabletop experience of discovering your enemies location and sinking their fleet. There was something special about having a basic game that made you feel like a tactical genius as you sank the enemy fleet. The latest in Wargaming.net’s trilogy of mobile warfare games, World of Warships Blitz is a tactical combat experience at sea with a surprising level of depth and some very intensely heated moments in battle. As with their previous entries, World of Warships prides itself on the accuracy of its models; each ship is meticulously constructed to be as authentic as possible, and given the number of vessels available in the game, it was clearly a staggering achievement to accomplish.

World of Warships Blitz is a free to play mobile MMO, and a slightly smaller version of its PC counterpart. The gameplay is simple, dropping you immediately into the action as you select a vessel and take to the seas in combat. You are able to select from four classes of ship: cruiser, destroyer, battleship, or aircraft carrier. Each one has its own advantages and disadvantages as you might imagine, with some being faster or having stronger attacks. The game also offers Premium ships which can be purchased which immediately begin with all available upgrades unlocked. Should you have a particular ship you enjoy and max out its upgrades, that vessel will be ranked as an elite ship, with the player able to select a special bonus to it.

“Weaving between small islands is tricky stuff but satisfying as a means of dodging enemy fire.”

There are six nations of fleets: U.S, Japan, U.K, U.S.S.R, Germany, and France; however, the U.K. and France only have Premium ships currently available. In total, World of Warships Blitz offers 95 different vessels to choose from, with each one open to customization and upgrades the more you play. It’s definitely a heftier number than I expected out of a mobile game, and the detail that has gone into the graphics is impressive. While we often talk about water mechanics and water detail when it appears in games, this is a title where the water is an essential part of the experience. The ripples, reflections, and billowing plumes of water as a charge strikes off the port bow all look fantastic and help you quickly feel immersed in combat. 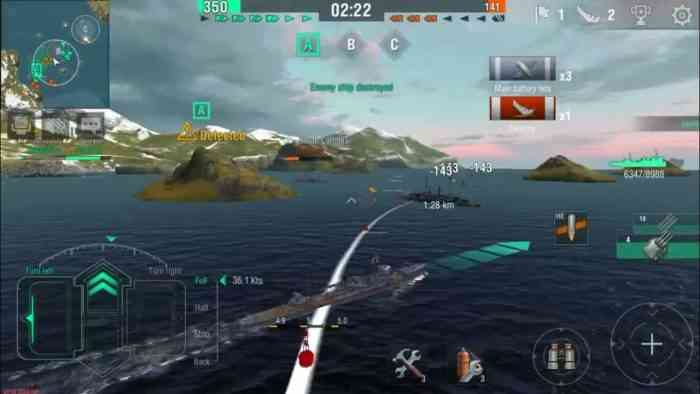 The controls are thankfully simplified, where you tap to choose your speed, hold a direction to turn, and fire at the enemy when in range. The game has a nice lock on system but keeps combat feeling authentic when it comes to direction of travel; if you are moving in the opposite direction as the enemy, your volley will strike where they were, not where they are. Not only must you do your best to protect your fleet, your direction of travel will be key to successful attacks. I am also quite thankful that these battles don’t simply take place in the open sea and that there are obstacles and objects to keep the player on their toes. Weaving between small islands is tricky stuff but satisfying as a means of dodging enemy fire.

Speaking of fire, the game has two key consumables for each battle: one to use when you have taken damage and one for when the ship is set on fire. Both of these are on rather long cooldowns so they need to be used sparingly at the right time. I found my ship at the bottom of the sea because I rushed to repair as soon as I took damage and left myself wide open. It’s a simple approach to a healing mechanic that adds tension to the battle.

“World of Warships Blitz just needs a little oomph to make it stand out.”

If you have ever played a free to play mobile game you have an idea of what to expect: a constant barrage of prizes to be had for daily login, completing tasks, unlocking ships, winning battles etc. There are hundreds of prizes to be won and it’s done as a way of pulling you in to keep you playing. While there are microtransactions as there are in any free to play game, it’s important you take away how little impact they have. Yes, you can buy resources, but the game throws them at you hand over fist. The only time you would need that extra income is if you bought all 95 ships and wanted them all to be fully upgraded as a completionist. The previously mentioned Premium ships are only ranked as high as sixth class and the highest ship available is tenth class, so buying said ship only gives you the slightest advantage, which would still mean nothing if you can’t play the game well. 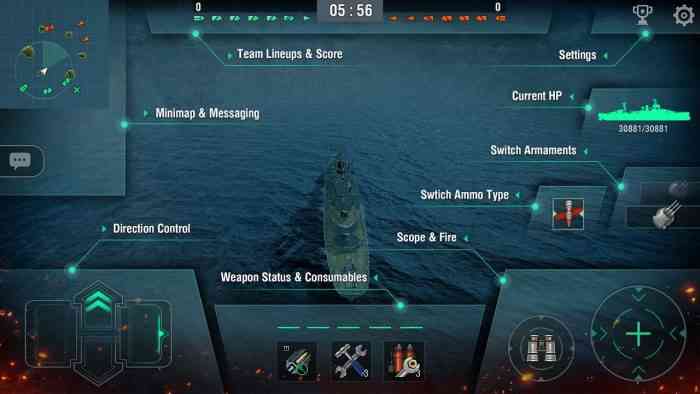 Despite the attractive presentation of the game and the variety of features, it personally didn’t strike enough of a chord with me to hold my attention for more than 20 minutes at a time. While it is enjoyable as a small break from the real world or simply to pass a little time, I didn’t feel compelled to play it as much as I had hoped I would. The gameplay is fine-tuned, the ships are excellent, but something about it just feels like its missing. Maybe I have played too many mobile games and it’s too familiar, but World of Warships Blitz just needs a little oomph to make it stand out.

World of Warships Blitz is a well crafted naval combat MMO that is both easy to play and offers loads of options to unlock. The graphical attention to detail is sharp and impressive, but despite all of this it still feels as if it’s missing something. The gameplay is solid because we have seen the same thing work before, and Blitz does little to stand out from the mold. If you enjoy the other titles in Wargaming.net’s trilogy than by all means this will be a great game for you, but as it stands I just couldn’t get into it. 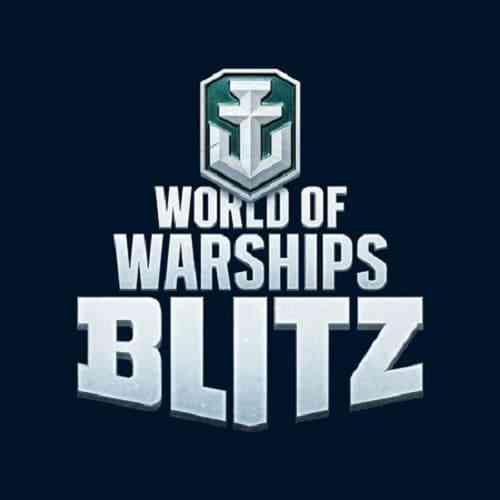