If you’re a perennially clumsy person and a terrible driver, there’s now a world where you can unabashedly be yourself — so long as you do your job, too. Totally Reliable Delivery Service is a ragdoll physics game that puts you in charge of a noodly, blue-collar delivery driver and has you struggle to transport packages against all physical odds. It’s a humorous and appealing game that encourages cooperative gameplay with up to four players, but unfortunately, I found it to be a maddening experience that falls flat in a number of ways.

Employee of the Month

Though your only goal in Totally Reliable Delivery Service is to deliver packages from Point A to Point B, it’s anything but easy. You have the ability to dive, jump and sprint, and you manually control your character’s right and left arm movements by grabbing objects with the corresponding back triggers on your controller. You can also raise their arms with each respective front trigger. Mastering this will be your first challenge, as you will need to grab packages and raise them on to different vehicles, platforms and drop-off points throughout the game.

To deliver packages, you must find different dispensers around the world and press their levers to begin the challenge. Once the package spits out of the dispenser, your objective flashes on to the top of the screen and your drop-off point is marked. Objectives never vary from the basic task of delivering a package to a specific point, but the challenges range from testing how fast you can make the delivery to how little damage you can do to the package before it reaches its recipient. The fragility challenges can be surprisingly difficult, since packages take damage when you knock into objects or drop them off the back of a truck, and avoiding these faults is nearly impossible unless you can master the physics of the game. 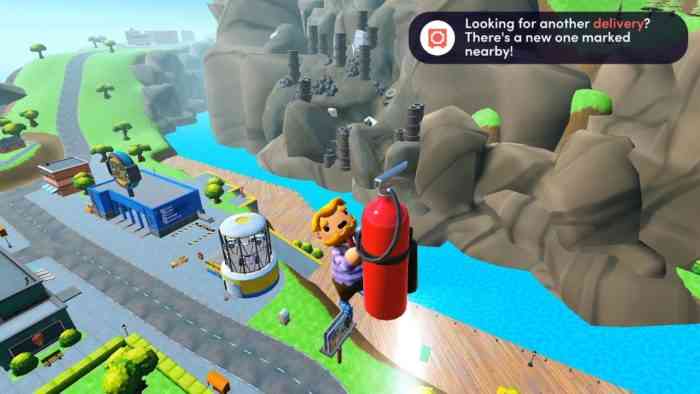 Operating vehicles is a key part of the gameplay, and there are a decent amount to play around with, from forklifts and pickup trucks to helicopters and boats. There are also some more unconventional options laying around the map such as hot air balloons, fire extinguishers that launch you into the air, and umbrellas that help you glide gently off the tops of buildings or mountains. You can use these vehicles to both help you traverse the map and to take your packages to hard-to-reach places. I found operating most vehicles in the game to be pretty nightmarish, and getting the packages to sit securely in the vehicle was (more often than not) a hopeless endeavor.

Up to four players can jump into a local or online co-op game in Totally Reliable Delivery Service, but unfortunately, the game’s multiplayer mode feels more like coexisting than cooperating. Only sometimes does it help to have another set of hands working with yours, because the gameplay doesn’t actually require teamwork in any facet to succeed. Much of the time, you’re stumbling over each other or taking turns performing tasks to achieve the same goal, since it usually takes only one person to carry out each action. For being such a hugely marketed part of Totally Reliable Delivery Service, the co-op aspect of the game feels flat and uninspired. 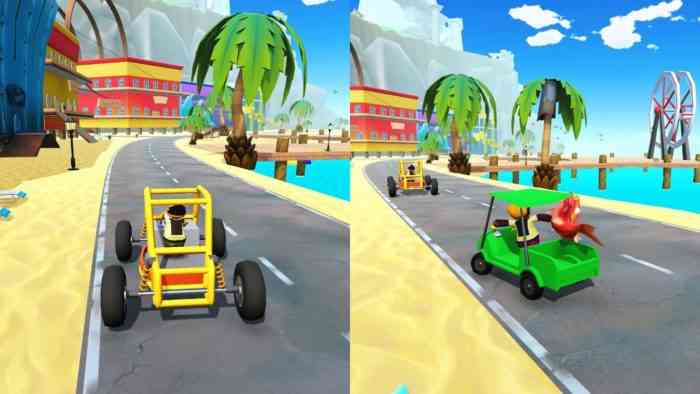 The map in Totally Reliable Delivery Service is entirely open from the start, but the world felt a bit lackluster to me. It’s bright in color and the animation is gentle and humorous, but there isn’t a lot going on around you. Every once in a while you will see an NPC laying on the beach or standing by a building, but it’s extremely rare that you will see a car driving around or other life in the world. Each region of the map has its own number of challenges that can be completed, and though there are other toys and kooky gadgets to discover, all of the regions feel relatively similar and fairly uninteresting. I didn’t feel drawn to explore so much as I just wanted to get the challenges over with, and that was a bit of a downer.

One thing the game does reward you with is unlockable cosmetic items for both your character and your vehicles. There are tons of different accessories, outfits and facial features that can be customized on your postman or woman, as well as skins and paint colors that can be applied to vehicles around the world. These items are unlocked often, and though they don’t make any real difference one way or the other, they’re comical to look at and fun to tinker with.

Given the simplistic and unvarying nature of the objectives in the game, it’s clear that Totally Reliable Delivery Service leans on its wonky physics to carry the gameplay. Performing the most menial tasks like getting in and out of a car or simply picking up a package can throw you into a fit of frustration, and not the fun kind that challenges you to keep playing. Your character will do their damnedest to grab packages behind their back, no matter how hard you try to get them to pick it up like a normal human being. Helicopters will fight against your every command, and driving cars can spiral out of control real fast. This is, of course, the basis of a ragdoll physics game, and you have to really enjoy the genre — or have a ceaselessly flowing fountain of patience — to muscle through it. 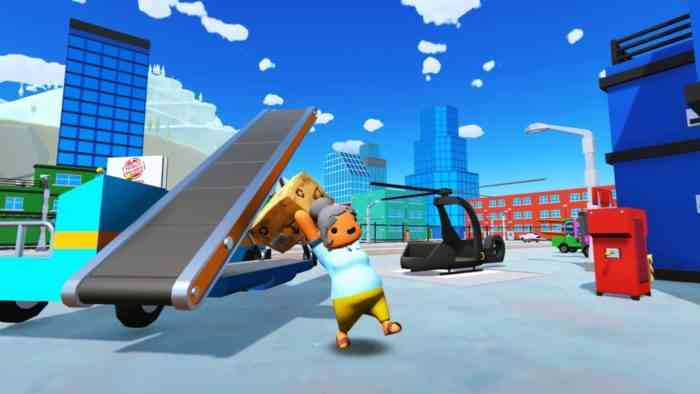 Totally Reliable Delivery Service has great music full of funky basslines and bumping beats, a cute and comical art style, and a lot of customization items to apply to your character and rides, but sadly the cooperative gameplay is nothing to write home about, and neither is the rest of the gameplay. I found that the combination of frustration mixed with the repetitive gameplay was not my cup of tea, and quite often, it felt like pulling teeth trying to get through it. It’s the fundamental premise of the game to struggle, but putting in a dozen attempts just to throw a package on to the bed of a truck simply doesn’t feel rewarding when you’re working towards the same goal over and over again.