In 1991, Eric Chahi took gamers on an adventure to Another World. Another World was a brutally punishing platformer game where life and death was separated by a pixel’s width of control. The game was frustrating back then with its finicky controls, and that aspect of the game seems even more so today with so many games offering smooth and precise controls.

Yet the lure of Another World remains because of the minimalistic but attractive art style of the game, coupled with — at the time — amazing animation of the characters. But the biggest hook of the game is the story and the setting — you play a physicist transported to an alien due to an accident caused by nuclear experiment. All of these elements merge together to create an engrossing atmosphere and experience all done with minimal dialogue or narration or hints.

The purpose of this preamble is because Chahi has done it again, but this time in VR style. In his latest game, Paper Beast, Chahi has his sights set on merging AI with VR, which is a pretty amazing thing to accomplish on a console. Paper Beast starts off with a message that this is nothing more than a simulation, yet when you get into the world, nothing seems further from the truth.

Paper Beast is comprised of 6 levels, though “settings” in the proper sense is the better term. All of the settings take place in a desert region, but sometimes you’ll find yourself in an underground cave system, and other times you’ll be in a hot air balloon ride above the world, going into and through clouds made of paper strips.

All the life of this world is made up of — you guessed it — paper based beasts. These origami like creatures make up a menagerie of animals that resemble ponies, scorpions, elephants, and lizard-like creepy crawlies. Your interaction with the Paper Beasts form the core of the gameplay, which is done with one of the Move controllers. The interaction on your part is limited to grabbing or lifting beasts depending on their size. The beasts interact with you through their actions, be it vocal or by their movements. There is even one particular moment where an animal pulls a Horta move: Check out the original Star Trek episode “The Devil in the Dark” for that reference. 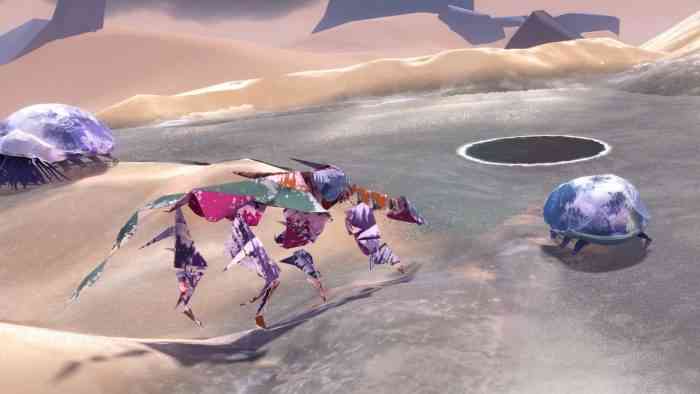 The grab function is also used to manipulate the environment, be it to steer or pick items and move or drag them elsewhere. This allows you to either build up piles of sand if needed to get around barriers or dig trenches in the sand to channel water from one area to another.

Movement is done with the other Move controller and is limited to snap turning and teleportation. Normally, such limited movement options are a deterrent to seasoned VR players, but given the openness of the world and the sedateness of the game pacing, they work fine.

The game graphics are crisp thanks to the simplified shapes and minimal texturing. One special note is how well modeled are the fluidity of water and sand when both are poured. The audio is very new-earth ambient punctuated by the occasional moos, chirps, chitters, and grunts of the animals. They all work well together to immerse the player into the world. 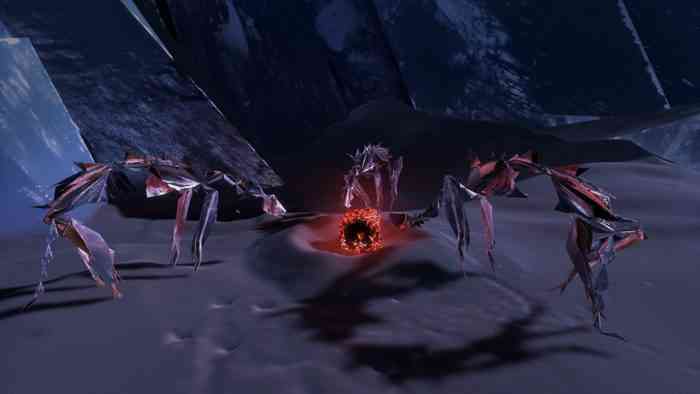 Paper Beast is more of an experience than a game. Being done in VR definitely enhances the mood of the game. There is no hand holding. You must figure out what needs to be done in each level based on the environment and the actions of the animals that inhabit said level. This can lead to some frustration, but overall the game does an excellent job of laying the necessary bread crumbs for the player to suss out the solution.

Playing Paper Beast is very akin to kicking back, chilling out, and listening to a Pink Floyd album — you are left in a contemplative state of mind.


Story of Seasons: Friends of Mineral Town Review – Blast to the Past

Ready At Dawn Bought By Oculus