Judging by the name, one would expect Witching Tower to be chock-full of magic and Gothic intrigue. Which is why it’s so jarring that, though both of those elements are certainly present in this VR adventure, neither is given the sufficient room to shine. Instead, Witching Tower is more interested in keeping you busy with finicky combat and obtuse puzzles, and by letting its premise fall by the wayside it loses the potential to become something more.

You play as Anna, a girl with latent magical abilities being held captive by an evil queen. Before the queen can steal your powers — and presumably, kill you – you escape with the help of a friendly ghost. Following this promising opening, however, the story begins to fall apart. From my two hour-long playthrough, I can recall only one brief scene that deals with the actual plot. As a result, most threads go unaddressed, such as how Anna got her powers or what the queen intends to do with her. There’s also an unnecessary late-game plot twist that adds nothing to the narrative. Witching Tower never makes clear what is happening or why any of it matters, and by the time the finale rolled around, I felt just as clueless as I was in the beginning.

Born to Be Mild

For all the build-up behind Anna, it turns out her magical abilities are quite limited. She has a lasso, primarily for pulling out-of-reach levers, and spectral vision that highlights interactive objects. Later on, she gains control over enemy skeletons – and only skeletons, for some reason – which adds an extra wrinkle to the puzzle-solving. But this last ability feels half-baked, as the process of ordering skeletons around is clumsy and imprecise, while the puzzles themselves require pin-point accuracy.

The bulk of Witching Tower revolves around solving puzzles to unlock entry into the deeper territories of the Queen’s fortress. Half of them are straight-forward, requiring you to align key objects or discern a simple pattern. A number of ghosts haunt the grounds, and in order to free their spirits, you have to help track down their lost belongings. In return, they reward you with tidbits of lore about the queen. 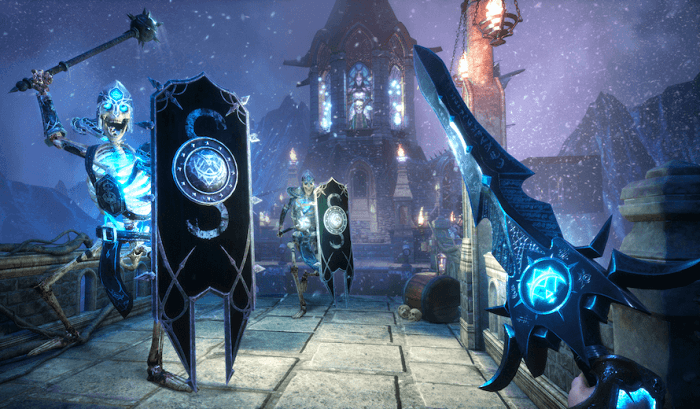 That being said, the other half of the puzzles are problematic. One section tasked me with brewing a potion; while I knew exactly what I had to do and the order to use the three ingredients in, I was stuck for a long time because I had mixed the ingredients together in a mortar, while the game expected this to be done in a nearby pot. Another example involved a flying book, which couldn’t be shot down with arrows, and must instead be grabbed with the lasso. In both cases, there were no hints or indicators to convey the counter-intuitive way the puzzles had to be solved in. Such questionable design decisions only led to a break in immersion on my part.

Not a Fair Fight

When you’re not tackling puzzles, you’re fighting. To my pleasant surprise, the combat has more depth than meets the eye. Damage dealt varies depending on where you strike. Against sword-wielding enemies, you can parry their swings to open up opportunities for counterattack. But like the rest of the game, the combat also has its fair share of issues. Hit detection is a bit wonky. This is especially noticeable when fighting enemies with shields, as it often registers you as hitting their shield – and thus dealing no damage – even when you’re smacking them directly in the head. Some enemies employ unblockable attacks, and dodging their attacks is a pain due to the teleportation locomotion scheme. Unless you’re playing with plenty of room, you have to teleport away then teleport back, which is much more complex than it should be.

Witching Tower has an interesting setup, but sadly misses the opportunity to expand its story and magical world. The focus here is on action and puzzle-solving, but neither of work well enough to carry the entire experience. Clocking in at a length of two hours, even that felt too long, as it’s clear the game runs out of steam. With an extra coat of polish and more time in development, Witching Tower might have shaped into a unique title. But as it stands, this is a dungeon crawler you can afford to miss.