If you’re like me and old enough to have owned an NES system back in the day, you’ll recognize right away that Super Blood Hockey, now on the Switch, is very similar to that system’s title, Ice Hockey. The pixelated graphics, arena and player design (three types ranging from skinny to medium to bruiser) are all so similar to the old-school classic that it straddles the line between loving homage and plagiarism. It’s likewise simple in its gameplay and thus easy to pick up and get into – grab that puck and you’re off down the ice, trying to put the biscuit in the basket.

Super Blood Hockey has obvious retro charm, and the familiarity is a good thing. Plus, it does have some new twists to freshen things up – starting with the blood. Yep, it seems almost an expectation nowadays that indie games contrast their cute pixel presentations with a sometimes-jarring dose of gore and violence. Super Blood Hockey is no exception, as each time players check each other a fountain-burst of crimson sprays out onto the ice. As players collide quite often, this soon results in a near-constant display of blood splashes, like watching a red fireworks display erupt around you as you skate around and try to score.

Blood on the Ice

It’s not just the checking that is violent, either. Super Blood Hockey is just generally one dark little game, and definitely not one you’d want to let your kids play — similar to another retro indie hockey game, Bush League Hockey. For example, after a fight the loser remains on the ice, convulsing from his injuries and issuing forth more buckets of blood for the next minute or so – that’s this game’s version of a penalty, which seems oddly unfair in that it punishes the victim for getting beaten in a fight. It can actually be a pretty disturbing game at times, which I guess is meant to be satirical; previous hockey titles like Blades of Steel tried to include hockey’s rougher aspects as well, but the violence in Super Blood Hockey is so over the top that any honest attempt at realism is literally drowned in sheer bloody excess.

But don’t get me wrong, the ridiculous violence is amusing and this is a fun game to play if maybe a bit simplistic. Controls are straightforward and effective when playing the actual game; you can power-up your shot and there’s a basic aiming mechanic reminiscent of the already-mentioned NES Ice Hockey, plus extra layers like one-timers and deflections. Unfortunately, the fighting is less effective. This part should obviously be a highlight of the game, but in Super Blood Hockey I wished I could control my player better during a fight. I also got confused as to which of my players was actually fighting, especially on the Switch’s small screen. I mean, fighting is something that happens a lot in the game – including pretty frequent bench-clearing donnybrooks – so it’s a downer that it isn’t more polished in this respect. 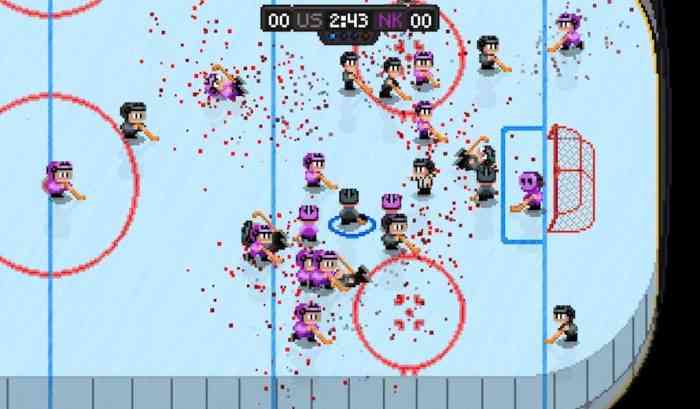 A strength of Super Blood Hockey is all the different game modes offered. You have single player and local multiplayer, as well as a surprisingly-deep Franchise mode in which you put together and manage your own team through a season of 28 days. I really got into Franchise mode including all of the ways that I had to micromanage my players’ injuries, training – even their diet. It’s not quite a complete sim, but there’s a non-intimidating level of immersion to it that reminded me pleasantly of titles like Punch Club. Plus, the dark, satirical elements (you recruit prison inmates to your team and feed them drugs to help their performance) were genuinely entertaining. Overall the different ways to play Super Blood Hockey including Tournaments and a Challenge mode offer something extra after the simple gameplay loses its novelty.

Good But No All-Star

I liked paying Super Blood Hockey, and it brought back nice nostalgic memories from the best of the NES days. It knows what worked about the old classics, and tries to make the experience new by adding its own ideas. The downside is that the gameplay was not deep enough to keep me addicted for too long. Yes, it makes a valiant try with Franchise Mode and Tournaments, and playing with your buds in local-multiplayer is super fun, but when the puck hits the ice, the core experience of actual hockey needs more to keep me interested long-term. But hey, until there is more selection of titles on the Switch, Super Blood Hockey is the only game in town and for that alone it deserves a look.