Life is Strange 2: Episode 3 – Wastelands Review – Between Every Two Redwoods

Life is Strange 2 continues its long trek towards Mexico with its third episode, titled Wasteland, which is set to hold fans over for a long time before the next—until August, reportedly. This made the events of this episode, which culminated from a slow burn into a raging inferno by the end, even more shocking.

Sean and Daniel, two boys from the Seattle suburbs whose lives were thrown into turmoil when the racially-motivated murder of their father triggered Daniel’s latent magical powers and sent them on the run as criminals, have been alone thus far. Sure, they’ve met people on the way, but their journey has been transient, and it’s been clear to the audience, if not them, that they’re not sticking around. In Wastelands this changes: Cassidy and her band of drifters from the second episode are now major supporting characters.

The major time gap between the second and third episode combined with the acceptance of Cassidy and her crew as major supporting characters broke the suspense of disbelief for me. We start the episode and bam, there they are, with little explanation if you don’t read through Sean’s journal.

It ends up working, but I did spend the first portion of the episode feeling disconcerted. I ended up really liking many of the new characters, however, and that made me want to stick around. Sure, going from a small town in Oregon to the redwoods of California has some whiplash to it, but it’s also a huge step up.

In previous episodes, I found the realistic relationship between Daniel and Sean to be enjoyable, even when their fighting frustrated me. This episode’s still realistic, but I think it strays from being good TV (and while technically a game, so much of these episodes are long cutscenes where you choose one or two pieces of dialogue that the description feels apt).

It’s just not fun to be Sean when Daniel is sulking and lashing out around you, and again, while it makes sense for the storytelling, there’s not a lot of enjoyment there. It’s likely designed that way—it’s a very serious story after all, but it can be draining to play, especially for the first half of the episode, which is a lot of talking and listening and not a lot of action. 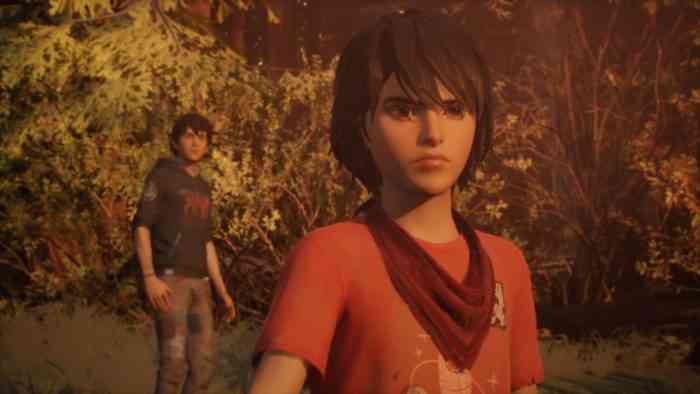 I will say, the mechanics try to introduce new ways to experience Sean and Daniel’s story to keep up the interest, but the pacing continues to be the biggest issue of Life is Strange 2. Slow and steady until a climatic ending seems to be this game’s bread and butter, but it can only work so many times before the player starts feeling pretty tired during the biggest stretch of the action.

It’s hard to get into any of the details of such a story-oriented game without spoiling anything, but I thought the events were stronger than those of the previous episode’s, and the game did an excellent job of not leading me into choices this time around. I’m usually pretty good at predicting the best choice, but for the first time I made a colossal misstep, and drastic actions occurred. I messed up, and the consequences are exhilarating. That’s what this type of game is all about.

Unfortunately, because of the pacing, it took the whole episode for me to feel this, and while many of the other events were interesting, the lull really dragged for me. However, I stand by my statement in my original review: Life is Strange 2 knows what it’s doing in a way that its predecessor did not.

The original game charmed people with its characters and premise but fell through on delivering a satisfying story. This game feels like it’s been mapped out from beginning to end, and this strength carries me through its weaker moments so I can experience events like the climax of Wastelands. I have faith in Life is Strange 2 that it understands where it’s going and what it wants to do, and I’m here for the long haul.