Firing up Where the Water Tastes Like Wine evokes a slow campfire vibe. As the old country drawl of the main narrator washes over you, you relax, letting the story take you wherever it may. Eventually, you’re led to a card game where you face off against a wolf in a suit. You lose. And this wolf (voiced by Sting) says you now owe him. He’ll let you pay off the debt if you travel America and find stories. These stories you find must then be recounted to other travelers you meet, as they in turn will share more about themselves and add to the greater overall story.

Boy, was I ever sold from here and I could not wait to start my journey. But starting that journey and finishing it requires two different mindsets. At first I was taken aback about the game’s weird overworld map. You are a skeleton with a bag on a stick and you walk the land, moving between places like Boston or Portland. Okay, I guess I can stick to the metaphor.

However, the novelty of visiting these far off places quickly boils down to selecting an area, hearing a story, and then moving on. Yes, occasionally you can make choices within these tiny vignettes, but it’s not enough to pull one through a 20 hour experience as every time you’re dropped back into the game’s sprawling and slow map. 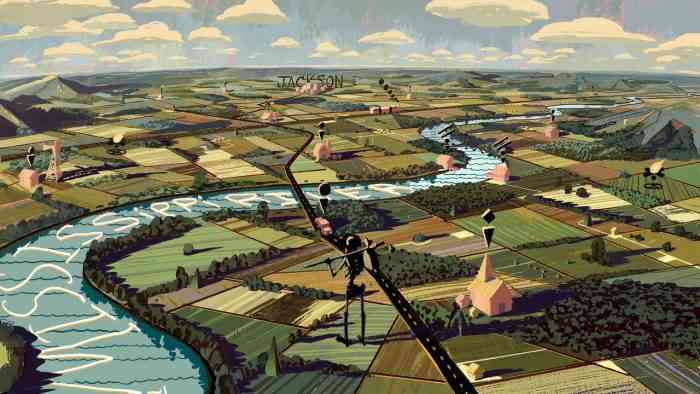 You can try and ease traversal by matching button presses to the current song, which will in turn give you a boost of speed. Every now and then you can also try and hitch a ride but given your slow pace, you’re more likely to see cars pass you than benefit from a stranger’s kindness.

The longer I played, the more I wondered whether this was the right vessel for what the game makers intended. The stories themselves are all good, with a few breakout exceptions, but from what I could tell, there was no greater story at play. I would simply gather a story, recount it to a stranger in order to “open their eye” and then they’d tell me more about themselves. Gather enough stories and you can get through most encounters without issue. And then you leave that stranger to find another and repeat. Over and over. 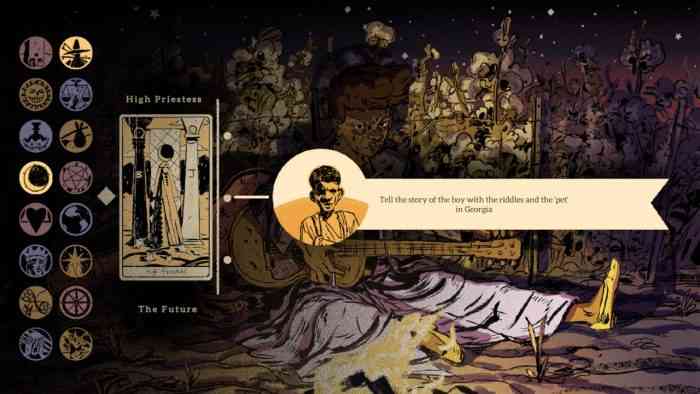 This is all the game is, and where my own weariness became to creep in after many hours. Once I had enough stories I’d simply travel slowly looking for people I could find but started to question my own motives. If I had enough stories to get through a conversation, should I bother to gather more? Why do I have to trudge slowly to the next city when it’s only going to open a few narrative options? Why the hell am I whistling?

This is compounded with the fact that none of the text or UI has been scaled up for the Switch, making the act of making choices a squinting affair if you play in handheld. I highly recommend you play on a TV or monitor if possible, otherwise the eye strain may take over.

Where the Water Tastes Like Wine made me think more about 80 Days, a game that fully embraced its narrative and the text within. I think the art, the writing, and the great voice work could have been better served here had it not been put upon by odd and slow walking mechanics with abstract UI menus. 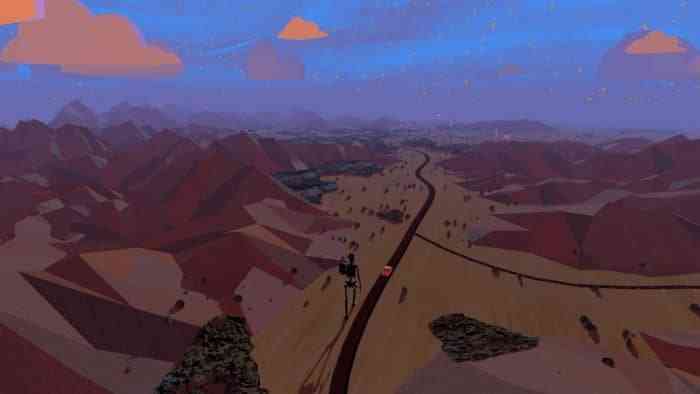 Ultimately, I think your mileage will highly depend on how the stories land with you, and whether the act of walking is a delight or a burden. I do think Where The Water Tastes Like Wine is worth a gander, just don’t expect a swan song of a tale or gut punch metaphor about early America. Enjoy it for it what it immediately offers: a fun series of tiny vignettes and discoverable characters to unwind with. Forget the rest.