We Happy Few, from Compulsion Games, pretty much embodies the idea of “potential” – its dark atmosphere, mixed with its British humor and psychedelic aesthetic, have caught the eye of many a curious gamer ever since its earliest reveals. But that potential has not quite been realized thus far, as players complained about the game’s survival elements and meagre story. Now, We Happy Few arrives on consoles and PC in a full release, with some retooled elements and a beefed-up narrative – is it enough to bring us joy, or will it still be a downer?

Down the Rabbit Hole, Guv’nah

Undoubtedly, We Happy Few pulls you in right away with a great narrative start. We start off playing as Arthur, whose job involves censoring news items in a dystopian, alternative-universe 1960s England. The Orwellian connection is clear and is just one of the many influences on display throughout the game, from other games like Bioshock and Half Life 2 to TV shows like “The Prisoner” to movies like A Clockwork Orange. In We Happy Few’s universe, Arthur and his fellow citizens survive a brutal and cruel totalitarian existence by taking Joy pills, which offer a temporary, psychedelic brain-cleanse and allow them to function.

But Arthur quickly goes off his meds when a particular article he is working on jump-starts his memories of his long lost brother Percy. As we soon learn, those who refuse to take Joy are ostracized as “Downers” and attacked by their medicated peers, so off Arthur goes on a desperate quest to escape this nightmare and reclaim his identity. We Happy Few becomes a sort of survival horror game, as you must travel through the fictional town of Wellington Wells and its many districts while avoiding the “Wellies,” abusive Bobbies (policemen) and even regular folks who are also off their Joy, all of whom will deliver a right good thumping to you at any moment just for shits and giggles. 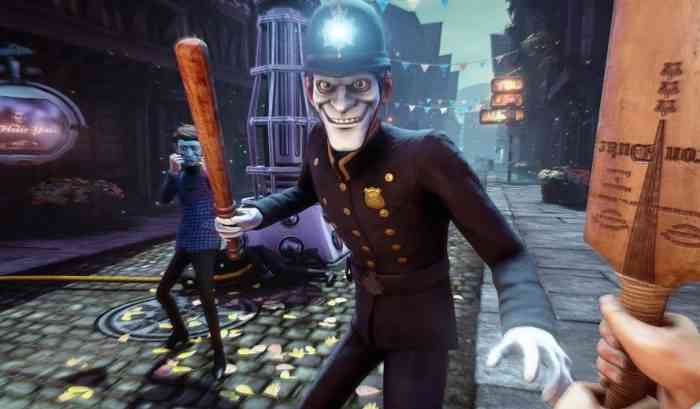 Aside from this smart narrative set-up, there’s lots to like about We Happy Few. A truly unique combination of humorous, light-hearted characters and visuals with twisted and nightmarish overtones make for a gaming experience that is undoubtedly original and unforgettable. Wellington Wells abounds with kooky characters, each ready with an odd quip and an unsettling happy-face mask as they simultaneously spread happy thoughts while threatening to call you out at the drop of a hat. Popping a regular regimen of Joy pills keeps you somewhat safe, but you’ll always be nervous about lingering too long around anyone, lest they suddenly unmask you as a Downer.

It’s a vast and fascinating game world that I would have loved to settle down and explore more, but there are some things that get in the way of a jolly good time. As a survival game, We Happy Few is very demanding on players and just staying alive can become a bit exhausting after a while. You have a wide range of unrelenting worries that include combat injury, hunger, thirst, exhaustion and poisoning from contaminated food – even something as simple as running too much. You find necessary items by searching trash bins, drawers and other places, and crafting recipes are slowly unlocked allowing you to make tools, clothing and healing items, all of which you’ll need, a lot. I found that the constant focus on all of the survival factors suppressed my desire to discover all the clever and cheeky content We Happy Few had to offer.

Another discouragement to exploration is the tendency of local NPCs to mob you if you reveal yourself by wearing the wrong clothing, searching for survival aids, wandering away from “authorized” areas, going off your Joy, going out at night, or basically anything besides sitting quietly on a bench. You need to learn and craft the appropriate apparel for each area, and remember to find and pop your pills regularly. Joy is limited in supply, so there are times when you’ll run out, which brings not only the wrath of the locals but an additional punishment in withdrawal symptoms. You could try to fight off your attackers, but I found that they quickly swarmed me, making stealth really the only long-term option to avoid being beaten to death. Put everything together, and Wellington Wells offers an experience of living in a nightmare world that is a bit too much of a nightmare at times. 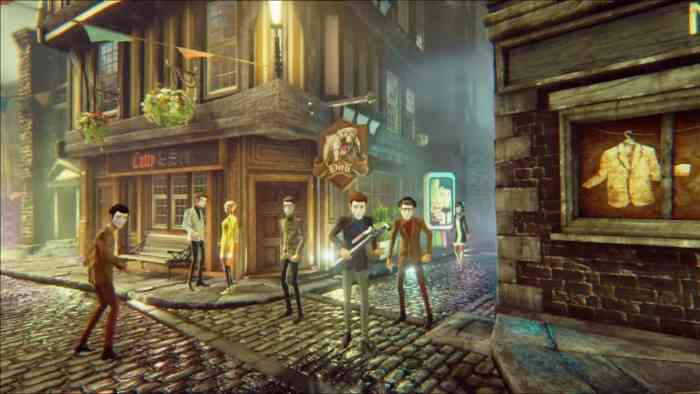 However, as you make your way through the game, you’ll unlock new and quite interesting areas, and the truth about Wellington Wells will be slowly revealed. 2 other playable characters – Sally Boyle and Ollie Starkey – come into the picture, each offering a new point of view and layer to the tale. Much like Winston Smith from 1984, they are each an “everyperson,” a stand-in for the player and out of sync with the mad, mad world they inhabit. Without spoiling the story, I will say that it’s a clever and smart alternative history with a Very Bad Thing at its core that explains the masks, the current state of affairs and the Joy pills. You’ll willingly swallow We Happy Few’s negative qualities for the reward of learning what makes this crazy place tick, and your efforts are worth it in the end.

So It Turns Out, Dystopian Nightmares Aren’t All Fun

It’s in this and the game’s many side-quests that We Happy Few succeeds, and I was left wishing that the story took an even greater precedence over the slog of survival and the other gameplay elements. Quirky characters and neat little funny, satirical moments abound in Wellington Wells, despite its citizens’ love of fetch-quests. There’s a Monty Pythonesque absurdity to it all that definitely hits the right note, and the environmental layout is dull at times but procedurally generated, so replay value is solid.

It’s hard to criticize a game that offers so much originality, humor and satirical atmosphere. We Happy Few, unfortunately, lets its narrative and characters get bogged down in a desperate and, at times, tedious struggle to survive the game’s brutal environment. Venturing down its psychedelic rabbit-hole will yield rewarding narrative answers, but the other gameplay elements will at times wear you down like a volley of billy-clubs.

This Video Ranks The Most Disappointing Games of 2018