Please note – that the build that was reviewed is pre-alpha and is not representative of the full experience Compulsion Games are aiming to deliver with  We Happy Few.

Montreal based Indie game developer, Compulsion Games, broke into the gaming world with a bang when their first game , Contrast, was chosen as part of the PS4 launch line up. Pretty challenging to release a game on an unknown platform but the team at Compulsion managed to garner positive reviews for their adventure game which mixed a 3D fantasy world with a 2D shadow scape. The game was also released on all previous and next gen consoles as well as PC.

Contrast had a distinctive German expressionism art style of warped buildings and odd angles to bolster the dreamscape aspects of its environment. A distinctive art style can also be found with Compulsion’s new game – We Happy Few. If Compulsion Games Lead Designer, Guillame Provost, described Contrast as a blend of Pan’s Labyrinth and City of the Lost Children then We Happy Few’s 1960’s vibrant art style of the game can also be easily discerned. It is like an Austin Powers movie come to life!

“A quick tour of your bunker, which is little more than a tube with a sleeping and workbench area, stirs echoes of BioShock, Fallout, and Half-Life. Great company to be in.”

Compulsion Games has approached We Happy Few with greater ambitions in place as this game is much more rogue like in its game play versus the straight up linear narrative of their previous game. When the game starts you are in an underground bunker listening to a very Orwellian broadcast in the mock friendly tones of Uncle Jack. A quick tour of your bunker, which is little more than a tube with a sleeping and workbench area, stirs echoes of BioShock, Fallout, and Half-Life. Great company to be in. You take a ladder up and exit out a hatch – Hey! Now a Lost reference! Cool! – and find yourself in an alternative 1960’s history in the English town of Wellington Wells.

At first blush it all seems well and quaint with its Tudor styled homes. That quick impression is quickly dispelled when you see the decay of homes around you and the overgrowth of the local flora. Even in this pre-alpha state of the game the building exteriors and vegetation are impressive. With the recently added stealth ability it is already possible to use the foliage to remain hidden to sneak by or up behind the drug subdued inhabitants. 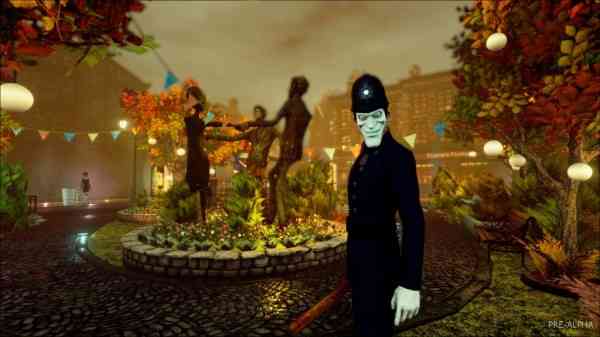 Speaking of those citizens, they all walk around Wellington in a drug and Uncle Jack indoctrinated state of bliss oblivious to the state of everything, including the state of decay. Except for anyone that is not ‘happy’ the way they are, which is of course you. Their conformity is reinforced by the Uncle Jack happy face consisting of white face makeup with a large smile to punctuate it. Shades of The Prisoner meets 1984!

In the current sand box state of the game, none of the narrative elements of the game have been integrated into the game yet. Understandably, Compulsion Games wants to hold those elements close to their vest until the game is released. For now, players have been able to sample the game play mechanics which will be very familiar to anyone who has played games like Half Life or Bio-Shock or the Uncharted series. The difference between this game and say an Uncharted, is that if you so desire, it should be possible to complete the game without killing anyone.

The other elements are there – you need to go gather materials and then find a work bench where you can then craft materials. It is what you can craft that shows the wacky mindset in which the game takes place. Items such as: Electro-Lock Shockers, Anti-Future Devices, and Bangers – no not English term for sausages, in this case a variant of pipe bombs. You also need to monitor your health and energy, collecting food, water, and plants to create health boosts. All very familiar rogue elements but done with a distinctive 1960’s look.

We Happy Few is being financed with a mixed approach of in studio funding and Kickstarter funding. Such a blend is becoming more and more the de rigueur approach for Indie Game Publishers. Lacking the resources of the big name publishers, crowdfunding supplies smaller companies not only an infusion of cash but a form of market research. It is a great way to present an early form of a game to players to not only earn their trust but to get their feedback.

At the time of this article, the Kickstarter goal has been reached and there is still a little time to contribute if you want to become an active participant in the game. They have several stretch goals that could still find themselves in the game. We’d encourage you to take a look and consider donating to the cause if you’re so compelled to do so!

We Happy Few already looks and plays great in this early stage. Add into the mix the upcoming narrative elements and randomly generated world maps and players will not need any of Uncle Jack’s meds to become We Happy Many.

Next Tom Clancy’s Ghost Recon: Wildlands Preview – In This Open World, Size Does Matter
Previous ABZÛ Hands-On Preview – A Title That Will Tantalize People to Play an Indie Game