I have to be honest here; I have never been an indie game fan.  It is not because they are bad games, but I have never paid them the attention I could have.  But that is about to change.  A couple of weeks ago, while at E3 2015 I had a chance to visit 505 Games to see what they had to offer.  Along with the well-known ADR1FT, another title was being showcased, the PS4 Indie Title ABZÛ.  I had no idea what this game was and who the heck was doing it, but after some hands on time with it, and a talk with developer Giant Squid, I found myself really intrigued and genuinely wanting to play this game.

ABZÛ is a game of exploration.  You find yourself in the role of a lone scuba diver whose goal, at the time of playing and writing this preview, was not clear.  What is known is that you dive deeper into the ocean world of the game searching for various items and solving various puzzles that allow you to continue on your underwater journey.  You will come across various underwater creatures.  During our discussion with Matt Nava, who just happens to be a scuba diver himself, and who happened to work on an indie game many know, Journey, we were informed that there are three ‘core’ features that ABZÛ adheres too:  fluidity, ecosystem and connection. 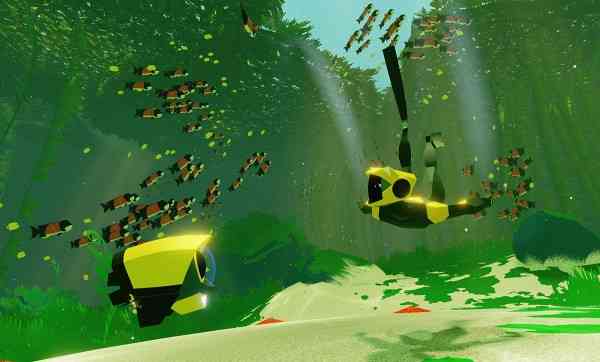 Fluidity is all about the focus of the game being a “sense of majesty and awe inspired by exploring underwater environment and encountering wildlife”.  To meet this objective, ABZÛ has no fail state that would cause the gameplay to ‘take a break’.  The diver is also very fluid as you can “pitch freely” in the water, which allows you to have a feeling of complete control and freedom as you explore.  On a side note, this game is not a “scuba sim”, therefore you’ll see no scuba gear such as air tanks, weight belts or gauges, as it is all about you, the underwater, and exploration.

The second core feature in ABZÛ, ecosystem, is all about the environment you explore.  The underwater world has “tens of thousands of dynamic fish” and it truly shows.  As I was moving about the first section of the gameplay demo I was amazed with how different schools of fish were swimming around and how I could actually stop, raise my hand, and interact with them, and they would react to what I was doing.  Different fish were darting about the ocean floor and navigating what obstacles were in front of them.  It was strangely realistic while being somewhat hypnotic as I just watched all the fish move about and forgot that I was supposed to be playing a game.  We were told that you will find a world that follows the “food chain simulation” as bigger predators eat the smaller fish while others hang out in coral reefs eating the virtual algae.

“It was strangely realistic while being somewhat hypnotic as I just watched all the fish move about and forgot that I was supposed to be playing a game. “

The final core feature, connection, is something I never even thought of when playing the game demo prior to sitting down and listening to the dev-team.  In ABZÛ you will find that all the interactions you have with the games creatures are “meaningful and respectful”.  When this was discussed, it was put to in simple terms: “Other games that feature interactions with creatures are such that you kill them to get an upgrade, item or gun, but in ABZÛ you don’t”.  This affects gameplay in such that you can reach out with the diver and touch the creatures and even ride some of them.  I can’t stress how much this affected the way I played, as I wanted to just hang out with the fish and see what I could do with them.  I’ll admit it; it was a pretty neat interaction system.

As evident by the screenshots, ABZÛ is not a game that is meant to push polygons and light up the screen with explosions.  It’s a game that is a visual art piece that has it’s own style while still utilizing the power of the PS4.  This was very evident in the lighting and the animations of all the underwater plant life as well as the various creatures you come across.  Fish swim fluidly through the virtual water and your character’s movements are just as graceful.  As for the game’s sound, I have to say that I haven’t played such a relaxing game demo in a VERY long time.  One of the first thoughts as I donned the headphones and listened to the game’s audio was how soft and soothing the music was.  Add to that the sound of schools of fish swimming around me and you have a total escape from the outside world. 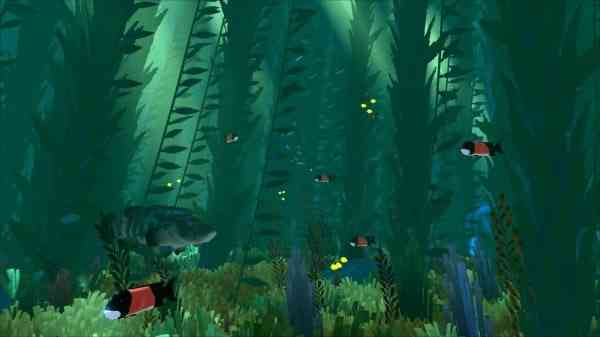 I have come to the conclusion that ABZÛ is a game that will make people want to play an indie title, myself included.  Sure, there are other indie games out there, but this one caught my attention in a way that I did not expect and it was actually one of a few favourite titles of E3 2015.  I think that indie fans will most likely love this game, even though only a snippet of the adventure was playable during the demo.  Personally, I can’t wait to see what the whole story will have to offer and what secrets unfold in the full version of ABZÛ.