We all know the debacle that Ubisoft went through with Assassin’s Creed: Unity. While many of the original issues that hampered the game’s performance upon release have been dealt with many people still report to have glitches and frame rate slowdowns galore. Being a large publisher that had a pretty decent reputation up to that point it was a PR nightmare for Ubisoft. Fans and consumers felt ripped off, and rightfully so, as it seemed as if Assassin’s Creed: Unity was knowingly released in this condition in order to hit a release date.

Here’s the thing Assassin’s Creed fans; I think we all know (or at least hope) that Ubisoft learned their lesson. They listened to the complaints, they re-evaluated the way they do things, and they took their lumps and apologized. After playing Assassin’s Creed: Syndicate at E3 this year I’m hopeful that not only did they learn a lesson when it comes to releasing a polished product but they also decided that they added too many bells and whistles in Unity. Syndicate has been stripped down in comparison, losing all the multiplayer garbage that hardly anyone enjoyed, and has become, once again, the one thing that the series should ultimately be known for; it’s fun again.

“Syndicate has been stripped down in comparison (to Unity), and has become, once again, the one thing that the series should ultimately be known for; it’s fun again.”

Now I have to be realistic of course, I’ve drank the Ubisoft Kool-Aid before and ended up with a sour taste in my mouth. I was only able to play a snippet of Assassin’s Creed: Syndicate and there’s still a whole lot of game to see. Regardless of this, what I did play was smooth, fluid, devoid of frame rate dips, and it had some fun new gadgets and mechanics that had me smiling ear to ear.

Playing as Jacob Frye, the first thing I noticed in the demo was the sheer size of my environment and how different it is from previous instalments. We’re in the midst of the Industrial Revolution so the signs of progress are everywhere. Buildings are under construction and the streets are wide open with carriages navigating through while the crowds move along bustling sidewalks. I wasted no time in deploying the rope launcher to speedily rocket myself to the rooftops and take in my surroundings. Immediately I smiled. Parkouring up a building was cool and all but zipping up is much, much better. 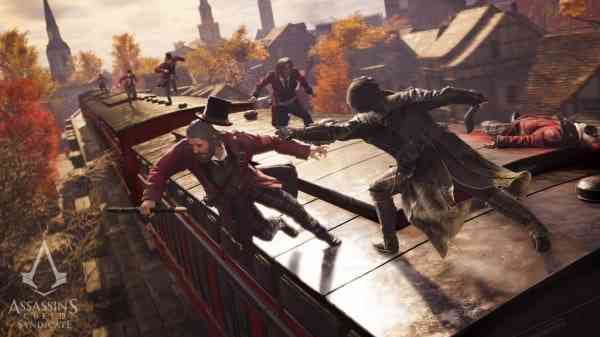 Over the course of my time with the demo I was able to take in most of the new combat mechanics; dropping down off a zip line to take out an unsuspecting victim, deploying a poison dart into a fire barrel to unleash a devastating area-of-effect attack which caused allies to go berserk on each other, and stunning a victim in a fist fight only to finish them off with a brutal gunshot to the dome. Every single interaction made me smile wider much to the delight of the gentleman from Ubisoft attempting to guide me through while I ran amok.

Wrapping up the demo with a hectic horse-drawn carriage chase through the streets of London I came to the final face-off with my target. What followed was a visceral 10v10 gang war throw down that had me smiling bigger than anything else in the demo. The first thing I thought of was the epic battle between Amsterdam and The Dead Rabbits versus Bill the Butcher and his Bowery Boys in ‘Gangs of New York’. It actually gave me goosebumps and felt just as epic in scale in Syndicate.

“I’ve drank the Ubisoft Kool-Aid before and ended up with a sour taste in my mouth [but] what I did play (of Syndicate) was smooth, fluid, devoid of frame rate dips, and it had some fun new gadgets and mechanics that had me smiling ear to ear.”

I said it before, when Ubisoft initially revealed Assassin’s Creed: Syndicate, that they cannot afford to release another Unity.  They have to eat humble pie, learn from their mistakes and release the best AC game to date or risk damaging the franchise for good. Early indicators are that they’ve done just that. While I’m optimistic that we’ll see a return to greatness I’m also wary of being duped by a very refined 15-minute demo experience. Still, my experience with the game at E3 has left me leaning much further into the optimism range. Fans should definitely keep their eye out for more information leading up to AC: Syndicate’s October 23rd release.