Warhammer Age of Sigmar: Tempestfall is a VR game from developer Carbon Studios. Originally released for PCVR, it is now available on the Meta Quest 2 for passionate Warhammer fans. I suspect they will be the only ones excited to explore this VR version of the green-tinted death realm of Shyish.

Warhammer lore is the strongest point of the game. You arrive in Shyish equipped with nothing but a basic sword and magic staff. As you search the lands with a Stormcast Eternal task force for fallen comrades, you will uncover or craft new weapons and magics. You will learn to wield the full might of a Lord Arcanum to battle the hordes of the Nighthaunt.

An exciting setup, but that initial buzz is quickly quashed. And it all starts with the opening tutorial. As the game instructs you how to choose and use your weapons, practice enemies appear. These enemies are sword carrying skeletons, which are fine and a staple of many a fantasy world. The problem is they stutter and stumble about with fewer frames of animation those stop-motion Ray Harryhausen skeletons from Jason and the Argonauts.

Fortunately, these animation stutters are less noticeable when you get into the game proper, but they continue to crop up. We might as well address one of the game’s limitations, namely the enemies. They fall into three major categories – skeletons, wraiths or specters, aka ghosts. The bulk of them engage in melee combat, with only a few capable of ranged attacks.

The limitation in enemy variety is indicative of the rest of the game. Within the first hour of gameplay, it becomes clear how thin the game is. You name it: combat, spell casting, exploration, craft upgrading, and environments – all become repetitive far too quickly. Lost is the initial gameplay buzz and the last five or six hours of the game become a chore. 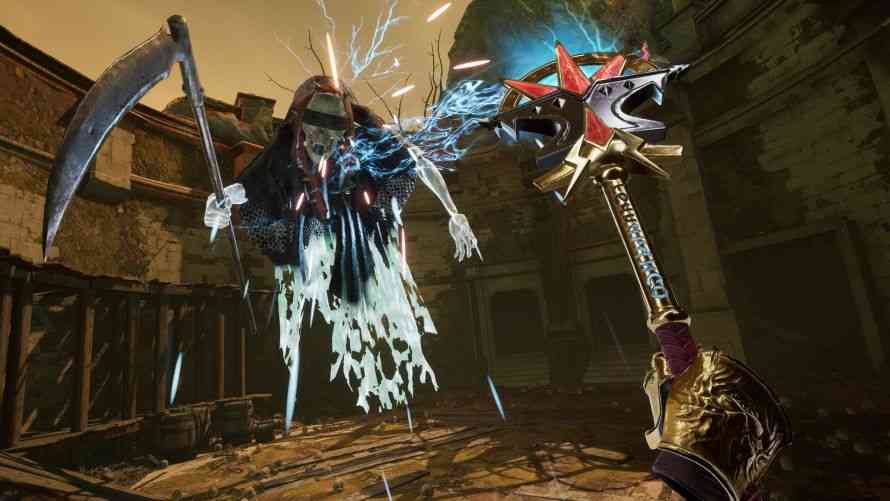 Next to the story, exploration is the game’s strongest point, along with the world itself – especially the interior sections. You’ll be searching these sections for materials to beef up your weapons and magic. For the weapons, you’ll be looking for the metal Sigmarite, while scrolls expand your magical abilities. You bring the materials to a hub world, where you wield a forge hammer to upgrade your weapons. You also engage in conversations with your compatriots to receive information, hints, or new tasks.

What should be one of the game’s biggest draws, the combat, turns out to be the weakest. The combat is motion-based, not physics-based. So actions like parrying are difficult to pull off, because there is only a small window of interactivity. Weapons have no sense of weight or inertia either.

Enemy actions are all canned animations, so you need to time your attacks accordingly. This makes it difficult to not just waggle your weapons, instead of engage in actual combat. There’s never a genuine sense of danger and the combat never becomes too difficult. This negates the need to update your weapons and magic to any great degree.

So melee combat quickly becomes boring, which makes the magic system more attractive. Magic is storm based. You’ll use your staffs to summon lighting strikes or balls of energy in chained attacks that leap from one enemy to the next. You can also store up energy in crystals which are used as magic grenades. Finally, representing the pistol equivalent of magic, you can shoot bolts of energy from your hands. 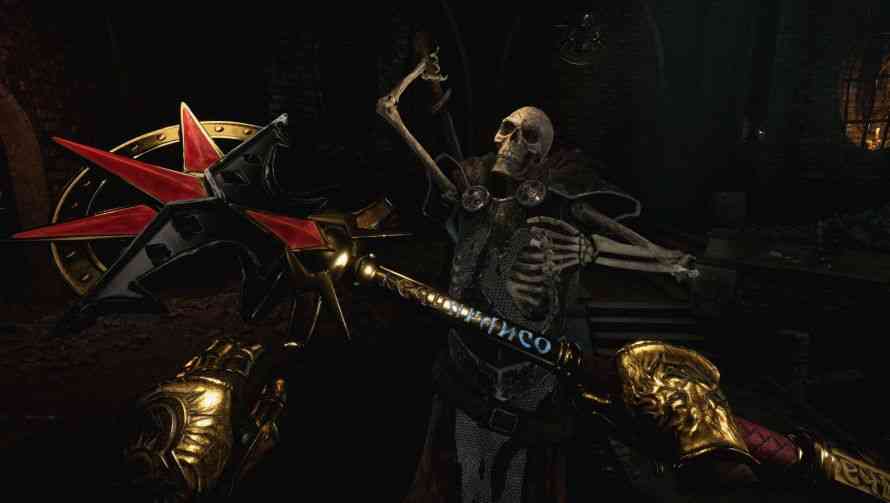 The best use of the Quest controllers is the grip mechanic. You can open castle gates either by lifting them or pulling levers. It’s also possible to climb by grabbing handholds or going hand over hand on ropes strung across gaps. If any of those actions become too tedious, there are teleport hotspots. A bonus of the grip mechanic is one where you can grab skeleton enemies and rip their skulls from their bodies.

Graphically, the death realm of Shyish is well presented. A fantasy setting allows some creative license in mitigating the limits of the Meta Quest 2 hardware. The cloudless green sky and haze diminish the need for displaying far off details. On the plus side, the world architecture is really cool, with enormous castles and structures such as humongous statues. They, along with gates and dungeons, have a higher graphical fidelity, even if the textures are of a lower resolution.

The menu system is well executed, with one caveat. Navigation between game options for audio and VR comfort settings is easy to navigate and read. The one exception is the Inventory layout for weapons. The weapon icons are too close together. I often grabbed the wrong weapon. Oddly, there is no map or health status available for display. I missed them quite a bit.

Tempestfall is not a terrible game. It’s just not a deep game. Other VR games have raised the bar on VR melee combat over what Tempestfall offers. For better melee combat games, try After The Fall or Swordsman, which use physics based actions. However, if you are a Warhammer fan, the story lore and setting may be enough to keep you engaged.

Frame drops
Combat is not physics based
Lack of enemy variety

An Elden Ring VR Mod Is Coming
Next Deadcraft Review – Half Zombie, All Man
Previous This War of Mine: Final Cut Review – A Lot of Misery