We at COGconnected loved Wargroove, giving it a 90/100 upon its original release. And news flash: it is still pretty great. With the recent addition of the free Double Trouble expansion, there’s never been a bad time to get into the groove. I never got the chance to really dive into Wargroove before this expansion, so I’ll be touching upon my reactions to the original game, before considering what the new content brings to the table. Ready? Set? Let’s kick it!

Groove is in the Heart

Man, the good folks at Chucklefish Studios have a good shtick. Take the old, beloved games, change all the names, and essentially make modern sequels for them. In the case of Wargroove, that means an updated take on Advance Wars — a game that, you guessed it, was originally for the Gameboy Advance. It’s a tactical RPG, a bit like Fire Emblem. You have units that you move across a grid, and when units on opposing sides collide, they attack, and a rock-paper-scissors system dictates how much damage is dealt.

Wargroove really shines in that it doesn’t let the formula get too complicated. You have a couple of factors to consider, but after an hour or so of gameplay, there aren’t a lot of surprises left. Spearmen beat cavalry. Archers beat flying units. Swordsmen beat spearmen and archers up close, but are vulnerable to cavalry. Units with full health deal more damage than units who have sustained damage. Different environment types affect unit power, and how many tiles they can move across. And that’s pretty much it!

Wait, I guess there are a few more cool little flourishes. Like critical hits! Every unit has a unique circumstance which will let them do a critical hit, for bonus damage. And then there are the grooves themselves, special powers unique to each hero unit. 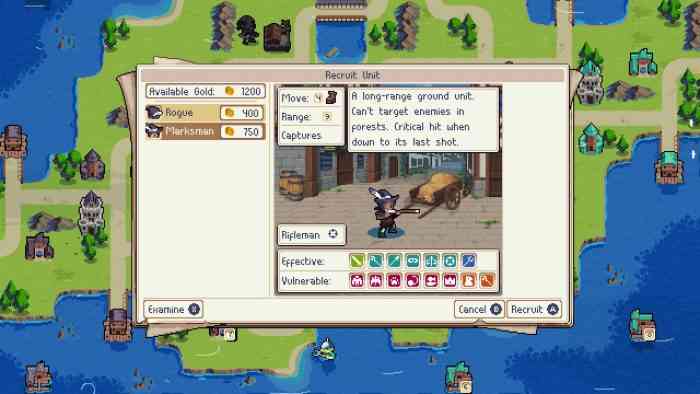 You know what? Now that I am writing it all out, it does seem like a robust and complicated system, but it’s a testament to the game that it never feels that way. The interface is generous and informative. I never struggled to check each unit’s strengths and weaknesses, and I didn’t have to dig through menus and codices. It was just a button push away. Before long, I had mastered the game… but it was still kicking my ass! Wargroove is as cute as anything you’d expect from Nintendo, but also shared old Nintendo’s wicked difficulty. And that’s great, because I was constantly being challenged to be a tactical genius, always pressed to thinking of new solutions to old problems. That’s good game design!

A Dog of a Time

Wargroove can be played in a few different ways, but mainly you’ll probably dig into the campaign. This is a light, somewhat superficial JRPG affair and dear reader, I was charmed. It’s the story of Mercia, a princess turned queen, on the run after the legions of the undead invade her kingdom. She’s accompanied by a comforting wizard and an adorable dog named Caesar, who the game continues to assure you, is a very good boy. The three of them make up the first couple of heroes, and you’ll meet a ton more across the campaign.

Yet, despite the cast and plot not being particularly original … I sort of love it? Maybe it’s the art style, or the minimalist 3-word-phrases-at-a-time voice acting, but I was hooked on Wargroove’s groovy fantasy mishmash. The mythology and character motivation stayed coherent, but never took itself too seriously, and I honestly found myself on the wiki trying to learn all I could about the necromancers and plant-people that make up its cast. 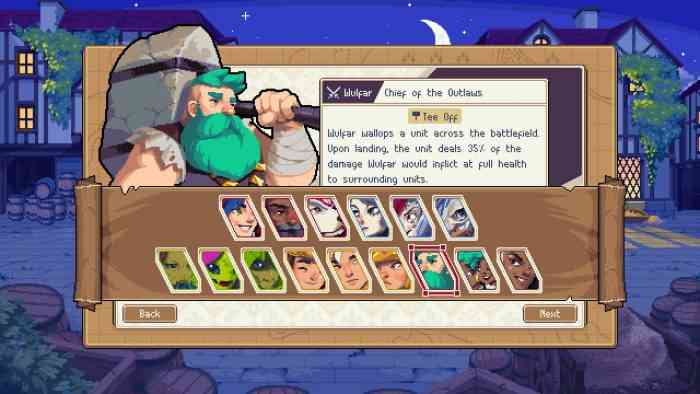 Besides the campaign, you’ll also be able to take the heroes into arcade mode, which are specific puzzles made to challenge the particular heroes in a mini campaign. The story is so light in general that an even breezier version didn’t feel that different, but having another set of challenging levels and charming dialogue to puzzle through was just more joy, heaped upon an already joyful game. Add to that a custom level maker, and a way to play levels created by friends, and that’s a staggering amount of content, much of it masterfully made.

So let’s get into it: the new content. A lot of it is more of the same, which is to say, great! There are two new units, thieves and riflemen, who give you more tactical options. I particularly enjoy the thieves who, as you may have guessed, steal money from enemies. This creates a viable strategy of fielding a ton of units while depriving your opponent of their ability to do the same.

There are also three new leaders. From my time with them, they feel different enough to be worth investing a lot of practice in. They also managed to charm the hell out of me, but at this point, that’s not too much of a surprise. The new units and leaders have new arcade levels to showcase them, which again, is no surprise. A lot of care went into the craft of the main game, and the DLC is no different.

But then there’s the main event: co-op battles. This includes couch co-op, which to a gamer my age is a transcendent and important experience. Plenty of games offer online functionality, but there’s nothing that can replace a classic game of Super Smash Bros or Sonic and Knuckles or Donkey Kong Country. Hook two controllers into your Switch, grab a friend, and go up against the legions of evil. 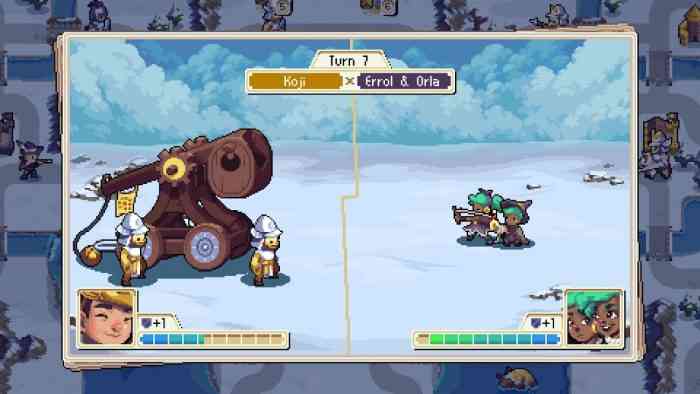 I don’t know what I was expecting, but co-op doesn’t really re-write the rules of the game. It’s mostly a back and forth, and it doesn’t feel too different than passing the controller around while playing the base game. But the very fact that it was included brings a tear to my aged gamer eye. The interface feels good, and any sort of local co-op support is a victory in and of itself.

So is Wargroove: Double Trouble worth your hard-earned money? Absolutely. It takes things that already worked in the base game and cranks it up just enough so that- hold on. What’s that? I’m being informed that Double Trouble… is free? This expansion that shakes up the tactics and the balance, that adds extra content to this already robust game is absolutely zero dollars? You guys! That’s amazing. Install this expansion pack and get into the rhythm of this excellent and yes, groovy game.