When I first saw Virginia listed on a page of upcoming games, I didn’t know anything about it. Somehow, I’d avoided learning of its existence, or anything about its development, without meaning to. However, what I saw and read on that website really piqued my interest, and led to me wanting to go hands on with Variable State’s narrative-driven indie as soon as possible.

Describing Virginia isn’t the easiest thing in the world, because it is, simply put, a mindfuck. Part FBI investigation game, and two parts X-Files and Twin Peaks homages, it’s a trip down the rabbit hole that will leave you thinking hours after its credits have finished rolling. By playing it, you’re essentially agreeing to fasten your seatbelt and lock yourself in for a two-hour trip into the unknown.

“Part FBI investigation game, and two parts X-Files and Twin Peaks homages, it’s a trip down the rabbit hole that will leave you thinking hours after its credits have finished rolling.”

Named after the state in which it takes place, Virginia puts players into the shoes of FBI agent Ann Tarver. As a recent graduate of the Academy, she’s been given a rather unexpected case to go along with her investigation into a recent disappearance in the small town of Kingdom, Virginia.

Tasked with investigating her own partner while also searching for the unaccounted son of the town’s priest, Ann finds herself in a rabbit hole, where time, sense and reality swirl around like cream in a coffee. 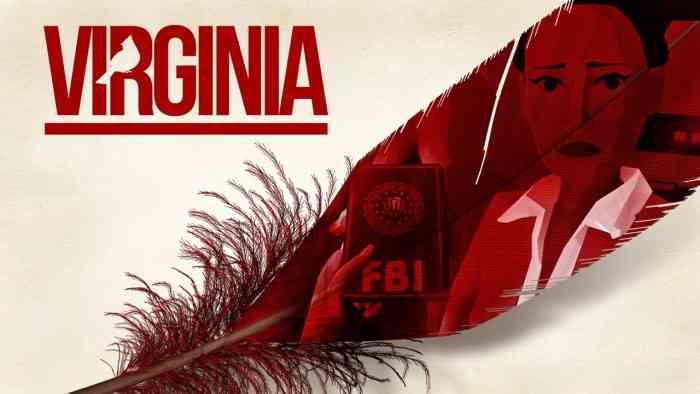 Over the next one and a half to two hours (the length of an average theatrical film, which is what the developers were obviously going for given their main menu’s options being “Start Feature” and “Chapter Select”) you’ll interact within this confounding world and attempt to unravel its threads.

To progress from one scene to another, you’ll need to explore each environment and find items that can be interacted with via the click of a button. Think of it as a first-person adventure game where puzzles aren’t the focus and interaction is limited to a very small amount of objects at any given time. Hell, sometimes there will only be one thing to click on in a room, as opposed to your traditional adventure game’s five to ten.

The trick here is to try to establish reality from dream state. Although Virginia takes place over the course of a week, its timeline jumps around at will. Day turns into night rather quickly, locations shift without warning and even a trip down a basic flight of stairs isn’t left alone. It’s an interesting way of presenting a narrative and makes for a very unique video game that will perplex, confound and intrigue those who give it a chance.

“While its basic mechanics and emphasis on story over gameplay won’t be for everyone, it’s a unique ride that mature and intelligent gamers should take, especially if they happen to be a fan of The X-Files or Twin Peaks.”

Granted, some may have a hard time calling this a game, which would be doing it a disservice. Despite its short length and the fact that it’s often more of a movie (or an experience) than a traditional video game, Virginia is part of the wave of creativity that indie developers have brought to this industry. As such, it deserves credit, as do its creators whose in-game note discusses how much of a passion project this thing was over the last two and a half years.

Of course, any replay value will depend on how much the story intrigued you. If you’re confused and feel that a second play through could lessen your brain’s fogginess, then going through a second time would definitely be a good idea. However, for some, this will be a one and done experience, like other narrative focused games and walking simulators. I definitely plan to go back through it at least once, though, because despite feeling like I looked in every nook and cranny, I seem to have missed some hidden opportunities. At least, that’s what the trophy list tells me. 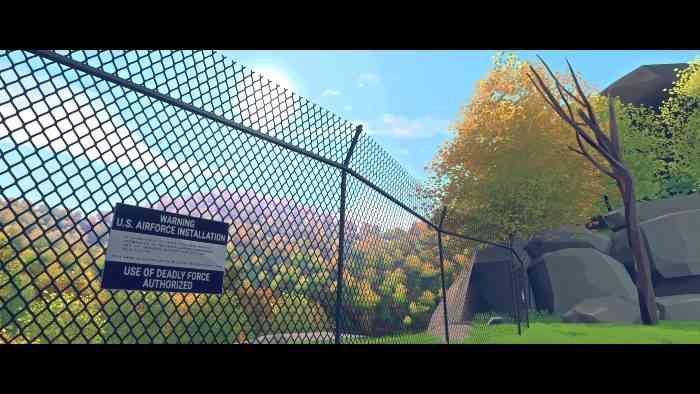 So, how does Virginia look and play? The simple answer is “well,” although I’ll certainly expand on that.

Much like the story at the centre of its investigations, Virginia doesn’t follow any rules when it comes to visuals. Its art direction is colourful, yet stylish, with character models that have limited definition. Everything has been artfully crafted for a distinct look, and though some may dislike it, I was actually quite fond of how it turned out. I also appreciated some of the nods to The X-Files, including a not too obvious shot of Assistant Director Walter Skinner.

The music also stands out here, thanks to incredible orchestral work and very fitting writing. Since Virginia doesn’t have an ounce of dialogue, music is integral to its existence, and what’s there couldn’t have been handled any better. I could listen to the original soundtrack by itself, as it’s just that good.

Overall, Virginia is a quality game that isn’t afraid to be itself. While its basic mechanics and emphasis on story over gameplay won’t be for everyone, it’s a unique ride that mature and intelligent gamers should take, especially if they happen to be a fan of The X-Files or Twin Peaks. This is something different, and it deserves to be applauded for that.

Escape Academy Review – Graduating With Honors
Next Halcyon 6: Starbase Commander Review – A Diamond In The Rough
Previous Dragon Quest VII: Fragments of The Forgotten Past Review – A Blast From The Past