Dragon Quest VII: Fragments of The Forgotten Past Review – A Blast From The Past

Dragon Quest VII: Fragments of the Forgotten Past Review

Since first releasing in Japan back in 2013, Dragon Quest fans in the West have been clamoring for the PS1 RPG remake to be brought over stateside. Finally, Dragon Quest VII: Fragments of the Forgotten Past has made its way overseas. With games like Dragon Quest Heroes II, Dragon Quest Builders, Dragon Quest VIII, and Dragon Quest XI (and… Dragon Quest Monsters: Terry’s Wonderland? Please?) en route, the series is poised to make a big splash worldwide. As a veteran of the Dragon Quest (or Dragon Warrior to some) Monsters line of games, I was very intrigued to experience life on this side of the grass.

Jumping into Dragon Quest VII, I was treated to a well-paced, meaningful story that did not center itself around battles like many JRPGs try to do these days. That is not to say that the combat system takes a back seat, but rather that the game goes back to its classic JRPG roots. The game starts you off as an unnamed hero living on a lonesome island with your friends, Prince Kiefer and Maribel. Through a series of events, you begin to visit different islands at different points in time. You begin to visit these islands by collecting their respective stone tablets until you complete their collection. Playing with the title of the game, you literally collect fragments of maps to travel to forgotten islands in the past.

“Jumping into Dragon Quest VII, I was treated to a well-paced, meaningful story that did not center itself around battles like many JRPGs try to do these days.”

As you visit these islands and solve their problems, the islands reappear in the present day. Rather than a quest to save the world from a great evil, you begin by restoring the world to its natural state. Although the story is more complex than that, we can leave it at that for now. Because the game takes the approach of having many different locations to visit, the game is able to be a bit more creative in its world building. In particular, I found it very interesting to experience the different cultures, religions, and dialects between the different islands, which makes the overall world feel larger than it is.

The world, adventuring, and monsters of the game all feel great. With the monsters, classic enemies such as the slimes provide cute, aesthetically pleasing, yet (at times) challenging encounters. The dungeons are fun to traverse and solve as well. Dungeons can sometimes feel vast to the point where you might get lost, and the puzzles are challenging yet solvable. Lastly, despite a strong narrative, the game sometimes does a horrible job indicating what you are supposed to do next. There were a couple times where the game tells you vaguely where to go, only to have an NPC stop and ask you if you actually understood. A nice touch, but that “feature” could have been utilized more. Lastly, there is a strange pause in the game after certain events, such as a person joining your party, resulting in an awkward 5-10 seconds in silence until you can continue again. 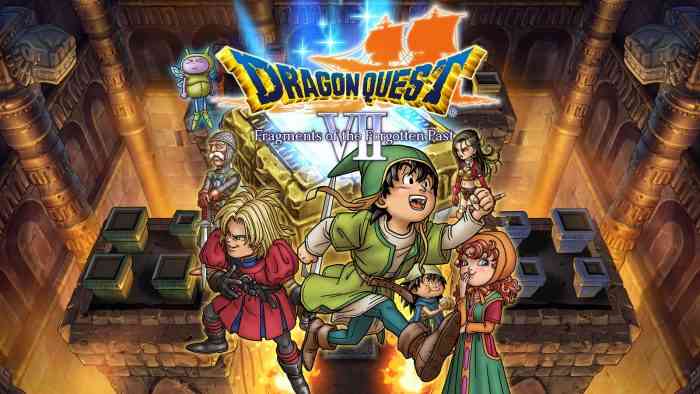 The combat system in Dragon Quest VII is simple, but not shallow. Veterans of RPGs will feel right at home with this turn-based battle system. Although simple, the game’s combat really opens up when jobs become relevant. Of course, the game features the classic jobs such as warrior and wizard, as well as some more unique and fun classes like the jester.

Graphically, the game looks great on the 3DS. The colors are vibrant and the game runs well. There were a few noticeable issues with the game. Particularly, the game does slow down on the world map at times, and trees and such pop-in in the background as well. Secondly, the game reuses character models way too much. For example, even characters who have names and play a role in the story have models which are reused countless amounts of time in other villages and sometimes even the same villages. Despite this, the game looks and runs relatively well on the somewhat underpowered 3DS. 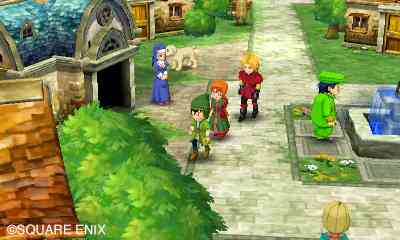 The game is also musically on point. The music in the background is distinctly lively, and most often suits the tone of the game. The sound effects are pretty simple, but convey the appropriate actions such as attacking, breaking open barrels, and so forth. Music in video games usually do not matter too much to me, but the tunes in Dragon Quest VII definitely stood out in a good way.

In conclusion, Dragon Quest VII brings back a classic Japanese RPG styled game for modern day players for good or for bad. RPG veterans will likely love this game, whereas some of the more contemporary RPG players might find the game to move slowly. The game can last players over 100 hours, and although the story might seem relatively slow compared to other games, the pacing and story are actually very well done. Overall, Dragon Quest VII is a great role-playing game that fans of the genre will undoubtedly enjoy. 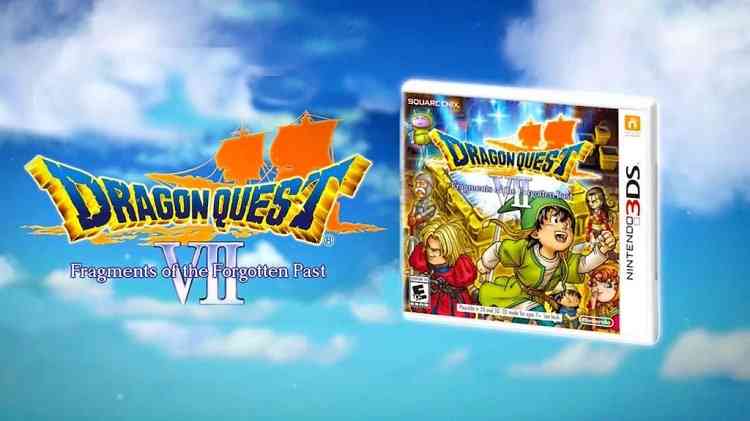