In Vambrace: Cold Soul, the player follows Evelia Lyric in her quest to fulfill her father’s wishes to reach Icenaire. Unfortunately, Icenaire is surrounded by a magical wall that causes instant death to those who try to enter. Lyric’s father has given her a magical vambrace that allows her to enter the frozen land. Once she arrives on the other side, she falls unconscious in the snow but is found by a guard patrol. When Lyric regains consciousness, she is interrogated by the locals who believe her to be a spy but manages to convince the townspeople of her innocence. It is here that she discovers that the surface has turned hostile and that she is in fact underground.

When they discover her vambrace, the townspeople ask for her help as miniature versions of the death wall are being used to hem in their patrols. They ask her to assist in their fight against the King of Shades. Lyric agrees just as a spirit attack allows for a prisoner to escape, leading to her first mission and the true start of the game. I created my party and ascended to face a frozen wasteland.

The game plays much like Darkest Dungeon, 2D side-scrolling through rooms on the lookout for enemies, traps, and of course loot. Your team consists of four members, Lyric and 3 recruits. Each member has a normal attack and a flourish, which is a special that needs to recharge and does so rather quickly, only needing about two rounds of combat. They also have the option to guard or swap places. Each class has a range for their attacks: short, medium, or long. The short range attacks can only be used by characters in the front two positions against the enemy’s front two positions. The medium range attacks can be used from anywhere but only hits the first two positions. Lastly, long-range attacks can hit anyone from anywhere.

I thought that only having two unique moves would prevent each class from feeling unique. I was happy to find that each class filled a niche without seeming like a copy of another class. Some examples of the classes include: berserkers that can buff themselves into a rage, shadowmancers that poison the enemy, and blood mages that offer buffs in exchange for health. A good party won’t just be about offense or defense. There are also other skills such as mercantile and overwatch. Mercantile allows you to get better prices from the occasional encounters you have with a roaming ghost merchant. Overwatch determines the benefits you get from camping. 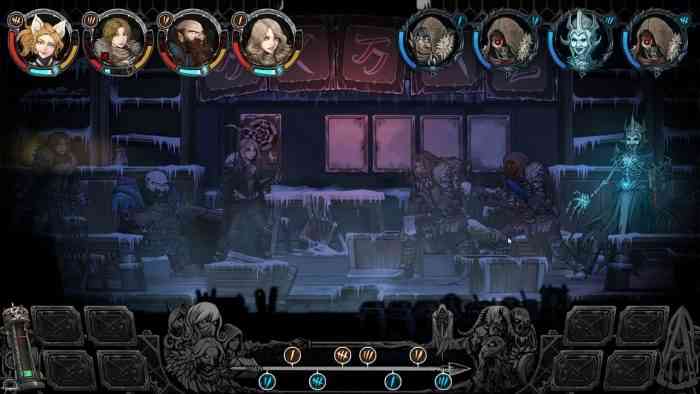 The player must progress while carefully managing their inventory of supplies, health, vigor, and terror. Vigor is a second resource for each character that drains as you spend more time on the surface causing death should it reach zero. Terror is measured by the Geistometer and signals the approach of the shades. You do not want to be around when that bar fills, as you will then encounter powerful enemies in every room. There is no way to reduce terror, so every rest stop is a calculated risk. This is especially important because resting is the only way to use items or change party equipment. At a campsite, you can also heal your vigor and health depending on your overwatch. Some races can even scout the area ahead. Think carefully, any of these actions at a campsite builds terror.

The art style much like the combat also has touches of Darkest Dungeon but is distinct from it. Where Darkest used red, black and other dark colors, Vambrace has more light whites and blues with a lot of detail in the character models. I was very impressed with how nice the art style came together to sell the atmosphere.

Enemies Aren’t Your Only Concern

Not everything is perfect. While I mentioned that each recruit had skills that felt unique the characters themselves are irrelevant. In Darkest Dungeon you had traits that allowed characters in the same class to feel unique, traits that accrued after many dangerous encounters. In Vambrace there are no levels or randomized quirks. When a party member dies it has little impact. I would just return to the bounty board for a replacement. The only time I felt loss was when I accidentally dismissed one with good gear still equipped. I felt bad about the gear but had no attachment to the other members of my party. Vambrace aims for a rogue-lite feel however it would benefit greatly from some way to create a meaningful attachment to your squad beyond the gear they carry. Ultimately the game suffers from its comparison to Darkest Dungeon in this regard. The game options were barebones and the controls heavily favored controller over keyboard and mouse. I would have liked to see more control options or keyboard button remapping.

Vambrace: Cold Soul is a great love letter to Darkest Dungeon. The art style is very well done and the story intriguing. The character classes manage to show great variety in their kits within their limited options. While the game encourages tactical retreats to replenish resources in town, it provides no incentive to invest in your party members beyond their gear. This ultimately makes your squad feel shallow and very expendable. For fans of games like Darkest Dungeon, this is a title worth looking into. 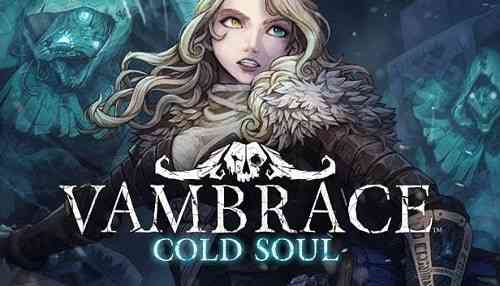