VA-11 HALL-A Nintendo Switch Review – Pour Me Another One

For every major catastrophe or massive showdown, there are endless little stories left untold. The reporters, the sex workers, the shopkeepers, and the bartenders all lead fascinating lives while Rome burns and the dead rise. VA-11 HALL-A: Cyberpunk Bartender Action gives you a glimpse of these tiny tales. What better home for these sultry little songs than the PS4, or better yet, the Nintendo Switch?

Valhalla (simply scribed for the sake of brevity) shines a spotlight on a single bar in Glitch City. Great, enormous, even terrible things happen here, but we’re not privy to them. Instead, our heroine soaks up minutiae from her many patrons, content to pass the days mixing drinks and changing lives. For what it’s worth, this is the meat of Valhalla: scraping up stories and serving booze to a menagerie of lost souls. Along the way, you slowly assemble Glitch City’s actual story, one involving bloody revolution and implacable dystopia. Still, it’s hard to feel the effects, nestled as you are in your dingy neon oasis. Whatever horrendous surprises stalk the streets, you’ve still got customers to serve.

Customers act as the nexus around which all the actual gameplay spins. Without this parade of weirdos barking orders, you’re merely reading a story. It’s a well-written story to be sure, one layered with nuance and smuggling deep questions in mundane events, but that’s all. Thankfully the act of serving up bevies is a deeply satisfying one. You won’t strain anything crafting the perfect cocktail, but there’s a simple joy in learning the recipes, in learning what each customer prefers. Plus, the innocent act of mixing drinks is the only way you can affect the narrative. 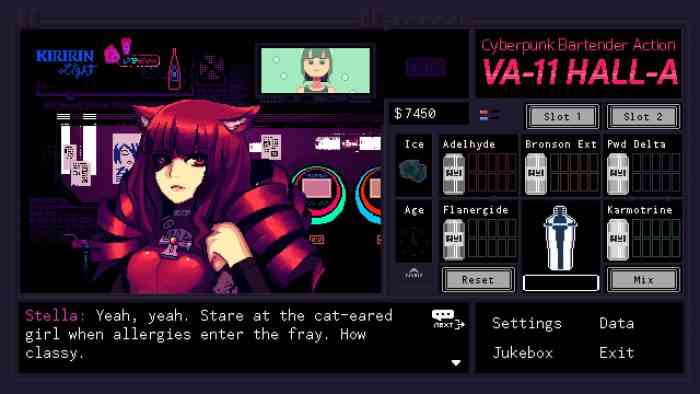 I’ll freely admit that my knowledge of this critical system is limited. I was so drawn in by the fantasy of competence and accuracy that it never occurred to me to do something wrong for the sake of the story. No, I merely did my best, content to see what sort of tale this spun up. There are other systems you can alter, such as what you shop for and where your money goes. You can get behind on rent and utility payments, barely a step ahead of eviction and utter ruin. Jill can get terribly distracted without regular fits of consumerism, you see. Who’s to say what kind of impact that will have on her workplace demeanor?

While the writing has some excellent hooks, they grow dull over time. Some of the characters suffer from a sameness of voice, possibly a victim of the chosen medium. People like the Lilim escort and the hard-nosed editor loom large, thanks to their various quirks. But anyone without a clear motivation gets murky and flat after enough time spent talking to them. Normally, I’m ready to gloss over such flaws. Other elements or systems smooth those bumps and polish up the complete image. But a game like VA-11 HALL-A lives or dies on its writing. I’m sucked in and repelled with equal ferocity at different points in the story. Really, it’s a credit to the creators that I’m paying so much attention in the first place. Perhaps if there were a wider variety of mechanics to draw my eye, I’d be less unflinching when it comes to the plot.

Don’t Sleep On That Soundtrack

Don’t let my nitpicking push you away, though. I’ve neglected to mention the music. You have unfettered access to an ever-expanding jukebox, a small bonus that let’s you set the tone for every scene. Don’t like certain parts of the soundtrack? Then you never have to hear them. For what it’s worth, you’re unlikely to run into any weak links. More or less the entire OST is an absolute bop. Every track evokes late nights in a neon dreamland being slowly turned to rust. Left to my own devices, I would spend every session poring over the catalog, picking perfect jams while customers rot on the vine.

For all my minor grievances, I’m enamored with this little bar. The larger narrative is pieced together by countless conversations with just as many people. None of them are alike, and all of them add something new to the mosaic. Even the apocryphal bits end up worth it in the end. Chat logs, history lessons, job descriptions, alibis, and cryptic orders all build what feels like a real place. More than ray tracing or 4K textures ever could, these collected story bits have swept up into a smoky dive that I’ll continually revisit, long after the tale is told. For a glimpse into something genuine, fascinating, and truly memorable, absolutely check out VA-11 HALL-A: Cyberpunk Bartender Action. 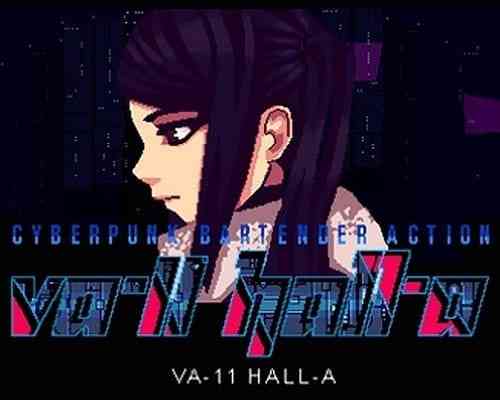