Turrican! Turrican! Does whatever a Turri-can. Okay, no doubt that line doesn’t play out as well as the original arachnid based one does. But it does give a glimpse into my headspace when I first played this game back in the 1990s on my uncle’s Amiga PC. Turrican, a biomechanical warrior was not only created for battle but built to bioengineer inhospitable planets into living ones. So with his unique nature, powers, and cool silvery robot appearance, Turrican became a new superhero to me.

The general storyline for the Turrican games sees the player sent to colonized worlds that have become corrupted by an evil force. It is up to Turrican to set things right, collecting goodies and destroying all baddies in the process.

The Turrican series made a much bigger splash in Europe than in North America maybe because its original roots are based on Factor Five’s 1990 Commodore 64 PC game. Factor Five, who would go on to Star Wars Rogue Squadron fame, took the exploration elements of the Metroid series and married them with the Run and Gun gameplay that would later become the signature of their Contra games. The inspiration for the Run and Gun gameplay came from Data East’s 1987, Psycho-Nic Oscar.

Exploration plays a big part in the Turrican series. The games feature massive levels that are filled with secret areas. Navigation consists of multiple paths due to the level design which incorporates both horizontal and vertical traversal. The levels are so big that it’s easy to get lost at times, leaving players unsure of which way to go. These levels make for long adventures further adding to the replayability. One of the nifty graphical touches as you explore is the color scheme used for the backgrounds. Generally the higher you go the brighter the background becomes. It’s a simple effect but quite striking. 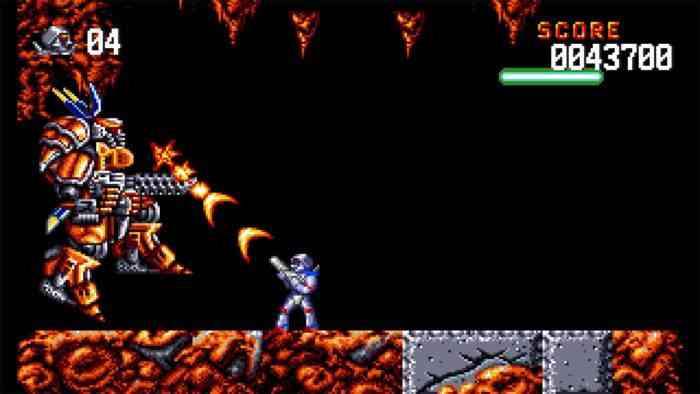 Turrican started out on the Commodore 64 but was shortly ported over to the Amiga PC. In 1993 Super Nintendo received it’s own port and in 1994, Turrican came to the Sega Genesis/Megadrive. The console versions, being lesser machines, featured smaller levels and a greater emphasis on gunplay. Both console ports had diminished graphics and sounds. The Super Nintendo added a freeze beam while the Sega version featured a physics based grappling hook a la the Bionic Commando. Neither of these new abilities affected overall gameplay to any great extent.

Game collectors take note, the Turrican Flashback collection should be seen as a greatest hits collection and not a definitive collection. There are many other ports and versions from the franchise not included here. The most interesting one is a fan produced one titled Hurrican. Missing is the second Super Nintendo game, Super Turrican II, as well as the N64 port of Turrican I & II into one game. A nice bonus would have been the inclusion of both the C64 & Amiga original game.

Factor 5 should however be applauded for the options included. Not only is there an improved control scheme but also a rewind option that allows you to undo deaths. This allows you to study and learn the correct approach and gameplay mechanics for the many enemies you will face. Also included are cheat codes and the ability to save wherever you want.

Nowhere are these options more needed than in the first game. The first Turrican game is filled with unexpected hits and cheap deaths where enemies practically leap out at you from the edge of the screen. These outdated game mechanics do not carry over well for modern gaming. With these options the collection pleases all audiences, allowing Turrican veterans to play the games in their original configurations while allowing newer players options to make the games more accessible. 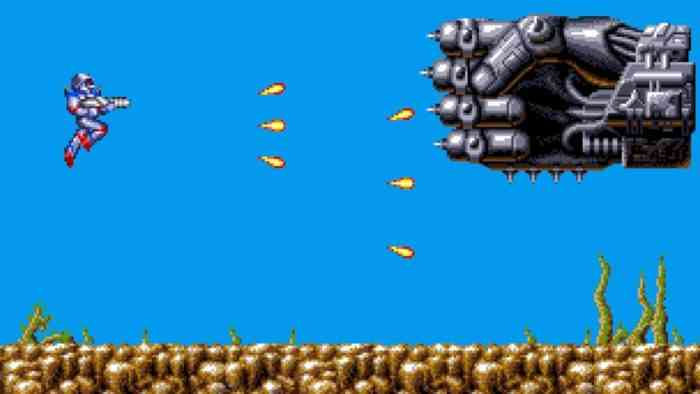 Options Make the Game Even Better

The slick menu provides many customizations for controls, display mode, scaling, wallpapers, shaders, color mode and rewind speed. Of special note are the shader options that include mask type and intensity. This provides one of the best CRT Scanline implementations for those that desire to recreate such an effect without the availability of a tube display.

All four games included in the Flashback collection look and sound great. With Turrican it cannot go without saying the standout feature is the music. Composed by Chris Huelsbeck, the scores are fantastic and worth a purchase alone. It’s amazing how much Huelsbeck was able to cram into the score given the technical limitations of the time.

The Turrican franchise features some of the toughest and most punishing run and gun platforming gameplay you will ever come across. Especially the first game. As the series moved out to the consoles, gameplay became more balanced as Factor 5 matured and refined their creative skills. If you are up for a run and gun gameplay challenge, Turrican Flashback fits the bill. 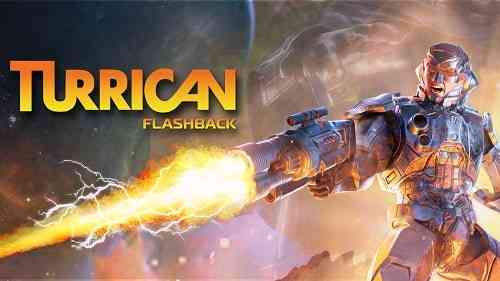 
Ratchet and Clank: Rift Apart is a Visual Masterpiece