Curse of the Dead Gods Review

Explore the lost temple in hopes of finding treasure, eternal life, and divine power. Unlike other roguelikes like Hades or Skul: The Hero Slayer, there isn’t so much an overarching story to experience in Curse of the Dead Gods, but instead, a deep and intricate location filled to the brim with mysteries waiting to be uncovered. You are an explorer, a real Indiana Jones-type, looking to discover the greatest riches the temples offer –and that’s more or less it.

Instead of the traditional roguelike “runs”, you are given the option of different quests to tackle –each with their own unique goals. Every time you access one of these quests, the route laid out before you is randomly generated. Though the ultimate goal is always the same, the path you take to it will be different each time. Even if you fail a quest, the game tracks exactly how far you made it through –though you will need to start from scratch each attempt.

The game’s earlier quests are rather short, serving as sort of trial runs to get you used to the core mechanics and enemy attack patterns. The first quest for each of the three temples within the lost temple, will only have you face one boss, while later quests will add mid-bosses to further block your path. In addition to the temple’s quest, there are a series of special event quests you can take on as well. 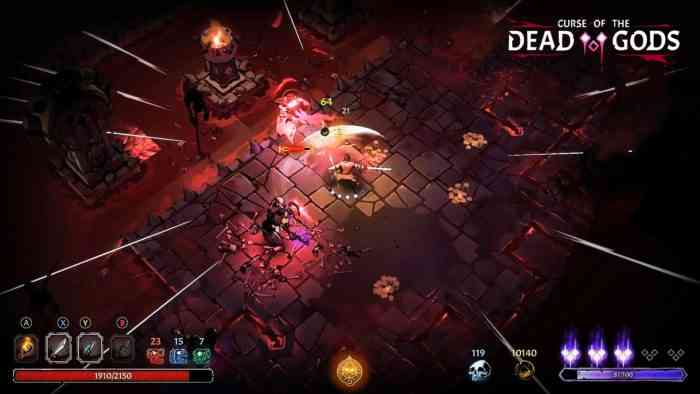 Below your character you’ll notice a stamina bar that starts with 5 points. Almost everything you do will cost you stamina: finishing a combo with your main weapon, using your secondary or two-handed weapon, making a dodge roll, etc. Stamina management is vital in Curse of the Dead Gods.

If you don’t pay attention to your remaining stamina, you might find yourself about to be hit from an unblockable attack, with no stamina left to dodge. Now, there are a few ways to regain Stamina with the most basic being to just wait it out. A perfectly timed dodge or a parry –with the right blessing equipped– will also do the trick.

Speaking of blessings, there are many to unlock and equip in between runs. Blessings can be purchased at the start of the temple in exchange for crystal skulls collected throughout your past runs. Blessings offer benefits from increased survivability to extra damage. There are also unlockable weapon blueprints and upgrades to the temple entrance that can help strengthen your future runs.

I mentioned that Curse of the Dead Gods’ stamina system dignifies the game from others in the genre, but there is another unique mechanic at play. Curse of the Dead Gods’ is dark, and I don’t just mean the dreary temple aesthetics, but rather, the game is extremely dark visually –keeping visibility to a minimum. However, visibility is the least of your worries as the darkness itself serves as your main enemy.

You take double damage while standing in the dark, making finding a source of light vital for survival. Luckily you have a torch you can use to light braziers, cobwebs, and enemies on fire. However, it’s not always easy to get that light source going, in these times you have to play extra carefully or you’ll start taking major hits. You’ll know if you’re standing in the light or not by the indicator on the bottom of the screen.

Along your runs you’ll have the option to choose which rooms to take –similar to the map layout from Slay the Spire. These rooms can include new weapons, relics, divine powers, healing, money, weapon upgrades, and mystery rooms. Everything from weapons to divine powers can be purchased with either money or blood –which brings us to Curse of the Dead Gods’ final standout feature, curses. 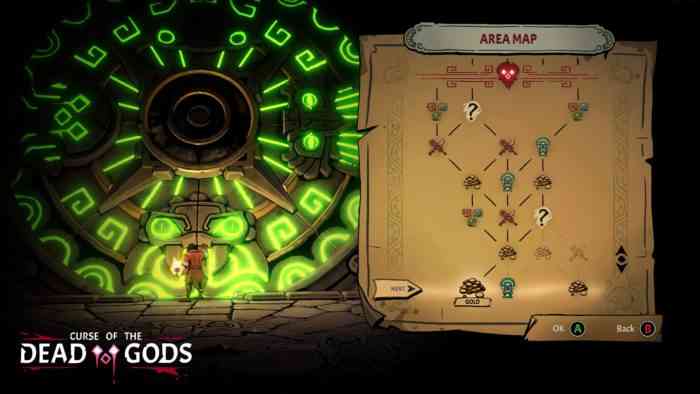 What a Horrible Night to Have a Curse

Throughout your run you’ll build up corruption. Corruption can be obtained through blood offerings, getting struck by enemy attacks, or simply by moving from room to room. Once your corruption level reaches 100, you’ll obtain a curse. Curses are often double-edged swords crippling you with a unique burden, while simultaneously serving as a blessing in disguise. Once you reach the fifth and final curse, you’ll be faced with the worst of them all –one that comes with no benefit and will slowly drain the life right out of you. While blood offerings can be extremely helpful in improving your run, you want to be careful to avoid that fifth curse or you’ll have a much harder time securing a win. 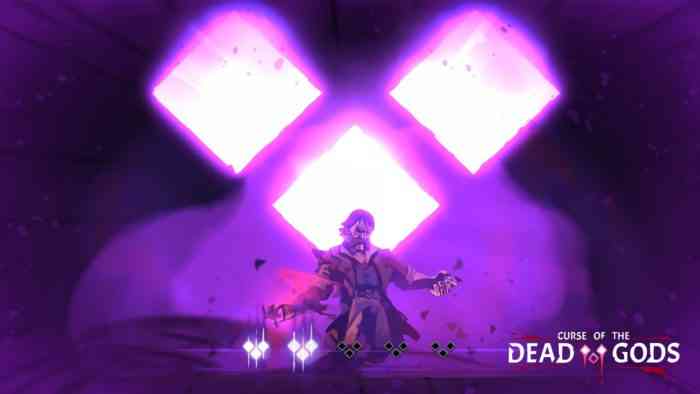 Curse of the Dead Gods is a brutal, dark, and edgy roguelite –one that takes inspiration from others in the genre while offering plenty of unique mechanics and ideas that set it apart from its predecessors. The game is hard, but rewards are frequent and plentiful. Winning a run, or being able to purchase a few of the pricier upgrades offers extreme satisfaction, making you feel like a true adventurer. The game elegantly balances a deep and complex risk/reward mechanic, while confronting you with an intricate and brutally difficult combat system. All things considered, the risks are truly worth the rewards in Curse of the Dead Gods. 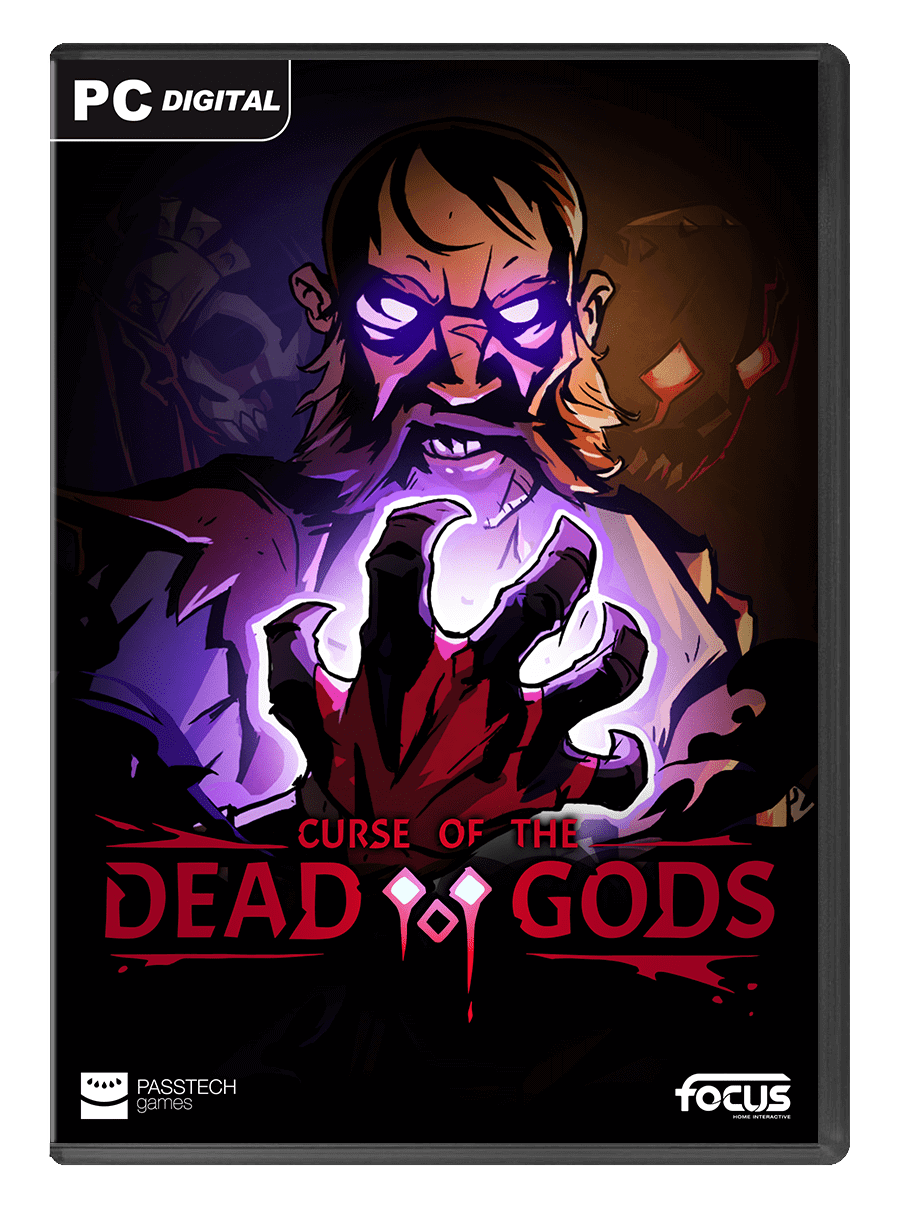