If you were in band, you might remember members of the trombone section. They were loud, full of themselves, but almost always funnier than hell. It’s what comes from playing an instrument that began medieval life as a “sackbut” and is really nothing more than a glorified kiddie-party slide whistle made of brass. Inferiority complex plus inflated ego equals trombonist, am I right?  Now, all you t-bone players out there, just relax. I genuinely love the low brass folks. They make a beautiful, noble and inspiring sound. When, that is, they’re not sliding around trying to find the pitch. The brilliance of Trombone Champ is that it allows for stupidly, hilariously bad music making and genuinely challenging, satisfying gameplay.

Back in those long-ago days of the first Guitar Hero, I remember joking about how funny it would be to have a game like Tuba Hero or Conductor Hero (though in the case of the latter, it would be a redundancy). Who’s laughing now? Because we’ve seen rhythm matching games spread from guitar to drums, vocals, bass, conducting (yes, it exists) and dance. Trombone Champ is either the pinnacle of the genre (if you’re a trombonist) or the bottom of the barrel. Again, just kidding.

While it seems like it could be a ridiculous joke game, like Goat Simulator or Cyberpunk 2077, Trombone Champ is a full-featured music/rhythm game. Like its guitar cousins, notes scroll by and your task is to both accurately hit the pitch and the length of the note. Unlike some games in the genre, the notes scroll from right to left instead of moving towards the player. This takes some getting used to. And, unlike guitar or bass games that only have four or six “strings,” the music in Trombone Champ covers a full two octaves. Moving the mouse up and down is not unlike moving the trombone slide in and out, after all. You’re gonna need a zippy mouse and limber wrist. 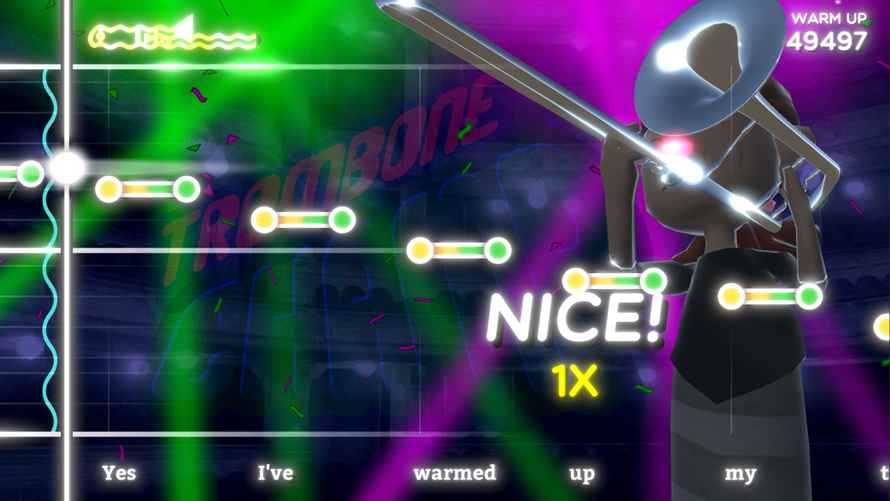 If Guitar Hero or Rock Band are entirely about timing and rhythm, Trombone Champ adds the genuine musical element of pitch accuracy. In other words, you have to hit the note not just on time but in tune. Just like real trombonists, you will find this pretty difficult. One of the “best” (everything is relative) things about real-life trombones is their ability to do slides from one note to the next. You’ll find this technique in Trombone Champ as well. All that’s missing is a cue to empty your water key (spit valve for all you civilians).

What About the Baboons?

Trombone Champ is a real music game, but an important part of the package is obviously its humor. In addition to poking gentle, dad-joke-level fun at the trombone and brass instruments in general, the game is oddly obsessed with baboons and hot dogs. When you complete songs, you earn points — called Toots — depending on your generously graded score. One of the things you can do with your points is buy trading cards. They come in packs of four. Each card has a fact about a famous composer or a tidbit of misinformation about brass instruments or baboons. Most of the composer cards have some sort of reference to how many hot dogs they could eat. There are lots of other things to unlock, like additional avatars or brass instruments. The baboon/trombone connection may or may not become clear. There may be a jump scare along the way.

The tunes you’ll be tromboning (?!) to are familiar light classics from the public domain, around 20 in all, with additional songs potentially on the way. Some of them are natural fits for the trombone, and a few are funny juxtapositions of elegant music — like Mozart’s Eine Kleine Nachtmusik — with an instrument that Wolfgang generally avoided in his light entertainment pieces (and in his life in general). The difficulty ramps up pretty quickly. Moving the mouse accurately and fast on the vertical axis can get fatiguing. The game recommends using a keyboard to actually start and stop the note, versus a mouse click. I agree. 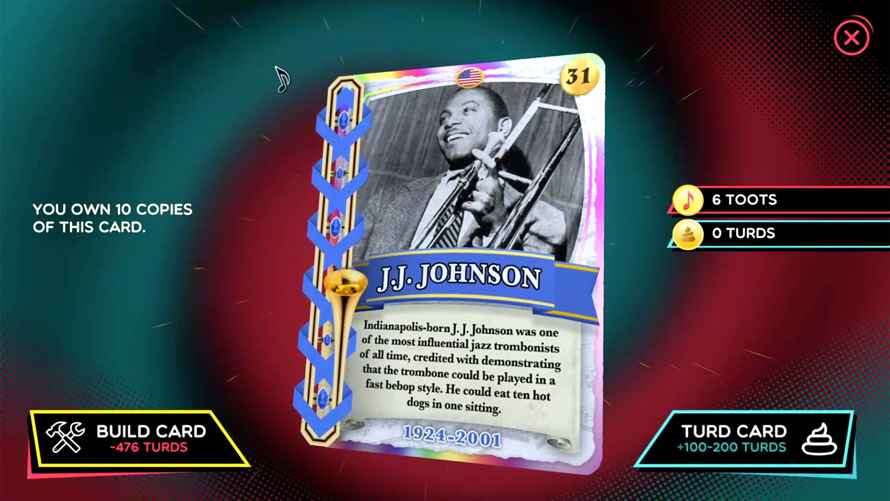 Surprisingly Good (Said No One Ever about the Trombone)

Trombone Champ’s art is pretty simple, with Mii-like avatars and a fairly basic presentation overall. I won’t spoil it, but there are some hidden bits of humor in the collage-like backgrounds of the songs and, really, throughout the game. The musical arrangements are catchy but likewise pretty basic. The digital trombone sample that you control is just realistic enough to trick your ear, but of course, lacks the nuance or articulations of a real trombone. Note, that sentence may be the only time “nuance” and “trombone” have been used together.

Developer Holy Wow seems to have serious plans for Trombone Champ down the line. Things like new song packs, improved UI, clearer scoring and even a note chart generator are on the horizon. If you’re looking for a trombone simulator game, this is one to get. Actually, it’s the only one, so it’s a good thing that Trombone Champ hits all the right notes. 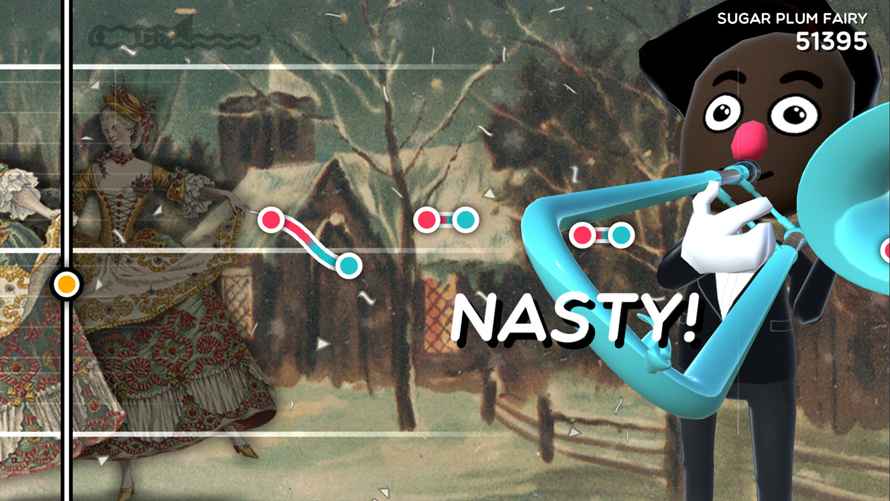 Real-world trombone playing entails years or decades of study, intense practice, sacrifice, blood, perspiration and tears. With Trombone Champ you can bypass all that sweat equity and just ascend to the trombone throne. Trombone Champ is a humble game made by folks with a genuine love of music, hot dogs, baboons and, even more remarkably, the trombone. It’s fun, funny, a little weird and an actual, genuine game despite what sounds like a silly premise. It’s no surprise that everyone secretly wants to be a trombone player, and now anyone can rise to that only dreamed-of level of coolness. Grab yourself some hot dogs, hug a baboon and go play Trombone Champ.

Note to trombonists: My sincere apologies for all the sick burns. Just because you’re an easy target doesn’t mean I have to shoot the arrow. My bad.


Bear and Breakfast Review – A Cozy Den Full of Goofs