The number of fantastical creatures to battle both with and against only continues to grow as we receive the latest DLC for Total War: Warhammer. This time, the Wood Elves, led by Orion, or Treeman Durthu, aim to protect their home, presenting an interesting spin on the usual focus of conquering with other races in Total War. Total War: Warhammer – Realm Of The Wood Elves presents a fresh gameplay experience, but the unique approach presents not only opportunity but some notable issues as well.

For those familiar with Total War, the tactics in these games are deep, and the Elves prove to be even deeper than other races. Where Orcs could solve their problems by throwing more Orcs at it, the Elves instead opt for their own brand of guerrilla warfare, using ancient magic, stag-mounted cavalry, and even the occasional sentient tree to help protect themselves as they advance towards their Victory Condition. In Total War: Warhammer – Realm Of The Wood Elves, the focus is to protect and build up their home base in preparation for a downright massive showdown between Wood Elves, and the combined hoards of the forces of Chaos and Beastmen. Making use of their new race-specific currency, Amber, the Wood Elves can advance their technologies, boosting their already potent armies, or to put that valuable resource towards fulfilling their victory condition of building up their home base more and more to achieve their true aims. The sheer unit variety presents some interesting new ways to take on opponents, but the Elves play-style is both its biggest draw and possibly its biggest drawback as well. 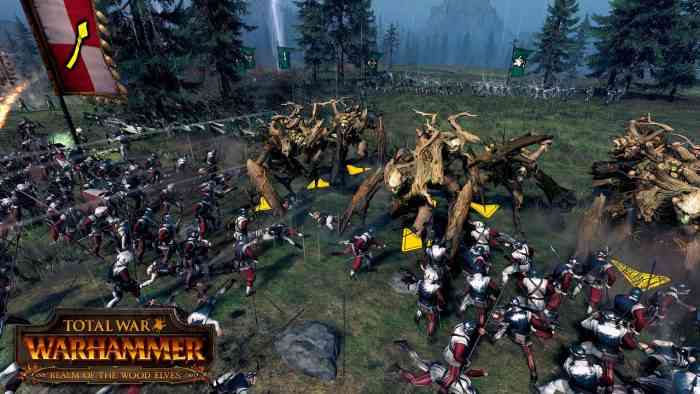 The usual battles in Total War make use of careful planning, but even when the odds are against you, it feels like if you carefully plan your assault, you can turn the tides of a battle you had no chance to win, initially. The new faction in Total War: Warhammer – Realm Of The Wood Elves presents a brand new way of playing, wherein they are the ultimate glass cannons. Ranged units that can move as they fire, strong melee units, and a variety of mounted support may sound good, but they make up for this offensive ability with being rather flimsy. The style of play for the Wood Elves turned into a battle of hit and run, but fortunately, the elves are quite good in that role. It is a tough task to get used to, though, as your squishy yet powerful units will likely fall against most allies if you simply try and throw them headlong into battle. They are meant to be carefully controlled, and at times I almost felt like I was playing a high-action RTS such as Starcraft, whereas Total War’s battles are a bit more of a slow burn. The biggest hindrance, in this case, is that it is just such a stark style of play compared to the rest of the series factions. Even the previous faction of the Beastmen plays entirely different from how the wood elves do, and this stark difference can admittedly be a bit of a turn-off. The micro-heavy play-style of the Wood Elves may seem daunting, but when you can get a hang of their intended playstyle, it just goes to show that Creative Assembly is capable of throwing us a few new ways to approach the giant battles we know and love.

“The sheer unit variety presents some interesting new ways to take on opponents, but the Elves playstyle is both its biggest draw and possibly its biggest drawback as well.”

Total War is a series that stays true to its roots and tries to continue to innovate in smaller ways, so seeing them take a more drastic approach with the Wood Elves is definitely a breath of fresh air in a series that already tried something new in taking on the Warhammer universe. The Wood Elves are definitely a breath of fresh air when it comes to this game, as they present a unique style of approaching battles that isn’t really seen with any other ones. The sheer variety in how you choose to build your base, and striking that balance between a well-rounded army or progress towards your goal also presents a refreshing approach to a DLC faction that is well worth the money, provided you’re up to the challenge of controlling the Wood Elves.Total War: Warhammer – Realm Of The Wood Elves is available as of writing on the Steam Store, and you can choose to take the plunge if you’re looking to continue to expand upon the many hours that you hardcore Total Ware fans have already logged with this title.

Total War: Warhammer 3 Could Be Out On November 4th
Next OneShot Review – Bring on the Feels
Previous Lara Croft GO Review – Puzzle Perfection