More and more gamers are turning to high-performance headsets to get every possible advantage; the sound of grass rustling behind you, the whispers of enemy targets in the next room, or the low growl of a beast somewhere out in the darkness. Gaming with a good pair of headphones can not only save your life as a gamer but it can overcome one of our most potent senses to help with unparalleled immersion. Thrustmaster – one of the trusted names in affordable gaming headsets – have now released the Y-300 CPX Limited Edition Far Cry 5 gaming headset. At a reasonable price and sporting a stylish themed paint job, just what does the Y-300 CPX have to offer in the way of immersion? 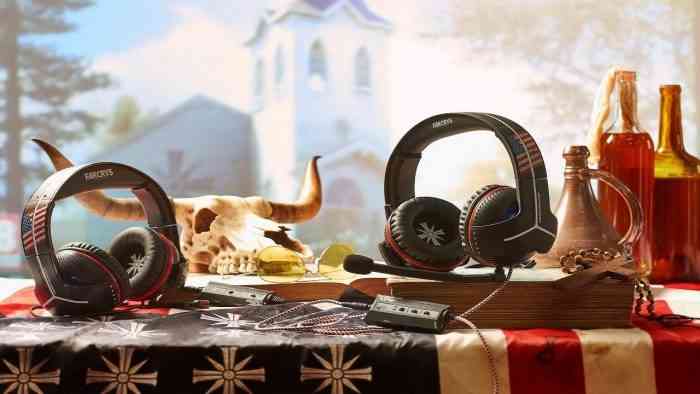 Physically speaking, you can’t ignore just how nice these look. The American flag decal and symbol for the Eden’s Gate cult inside the ear pieces look fantastic, and given Far Cry 5‘s abundance of hunters and pilots, wearing a headset like this only helps add to the experience. Nice and light with adjustable sizing, the earpieces feel a little tighter than what I’m used to but it took no time to adjust to. It’s also nice that after extended gameplay I didn’t feel like my brain was overheating, nor did my ears feel sweaty and gross. In fact, my only immediate comfort issue comes from the chat mic: despite having an adjustable base it remains in front of your face constantly, regardless if you are using it or not. It is removable but it’s not worth the risk of losing it because it’s quite possibly the best mic I’ve had the pleasure of using.

The unidirectional chat mic sounds unbelievably crisp, letting me communicate with my friends as if we were in the same room. Not only did I get great reception, but the noise canceling feature of the headsets made it that much easier to pick up on not only my friends, but whatever was going on in my friend’s house. Add to that the multifunctional controller settings for the gain and chat volume as well as quick switches for the mic and it makes for an easy and satisfying experience. While the multifunctional controller also sports a custom paint job and is simplistic in its design, it also lends itself to being one of the biggest problems with the headset itself.

Featuring a game volume and bass wheel, I thought I somehow managed to plug it into my PS4 wrong as it had no effect on my game. After rifling through the manual I discovered the fine print: the bass and game volume wheels are for the previous gen consoles (PS3 and Xbox 360) and instead the controller would only offer me master volume control. The controller itself, unfortunately, was also attached to a separate USB connection, meaning if I wanted to simply plug the headset into the PS4 controller I no longer have access to the master volume with the flick of a thumb; I would now need to go to the PS menu and go through a few screens to adjust the volume. Playing any game with the USB plugged in was simple enough with a decently long cable but it yet again proved its own uncomfortable problem: wanting to make the headset work across every possible platform, the USB is also wired into some bulky RCA cables that cannot be removed. That means when I’m sitting four feet away from my TV the wire going from the headset is being weighed down by the multifunctional controller, the weight of the cord itself, and the additional two cords that split off and add to a tangled mess. The cable does have a Velcro strip to manage it but it quickly negates the point of a lightweight headset when the cable is pulling on your neck.

Despite these problems, the actual audio quality of the headset blew me away. Considering my previous headset cost $350 USD and the Y-300 CPX retails for $60 USD, there really isn’t much difference in quality. Whether listening to music on my PC, watching a movie on Netflix, or playing Assassin’s Creed Origins, I could clearly hear every beat, bop, pop, and boom with perfect clarity. Explosions and flames had no hint of static or scratching, instead, I could hear pin-drop quality echoes. Running the streets of Egypt let me eavesdrop on people a fair distance away, and despite the bass wheel not working the natural bass the headset produces is a satisfying reverberation in my brain without inducing a splitting headache. The background music and ambient sounds come through so pristine I actually felt like I was playing a different game and I found an even greater appreciation for the majesty that is Assassin’s Creed Origins.

With a stylish but modest Far Cry 5 paint job, comfortable leather earpieces, and noise-cancelling capabilities, the Limited Edition Far Cry 5 Thrustmaster Y-300CPX headset is a bit of a drag when it comes to cables and a partially functional controller, however the sheer quality of audio and light weight of the unit provide an equal  experience to some far more expensive headsets. The chat mic, while not having much room to move, has fantastic quality and given the affordable price, this is easily a smart purchase for the gamer on a budget that wants the absolute best out of their game.

*** Headset provided by the manufacturer for review purposes *** 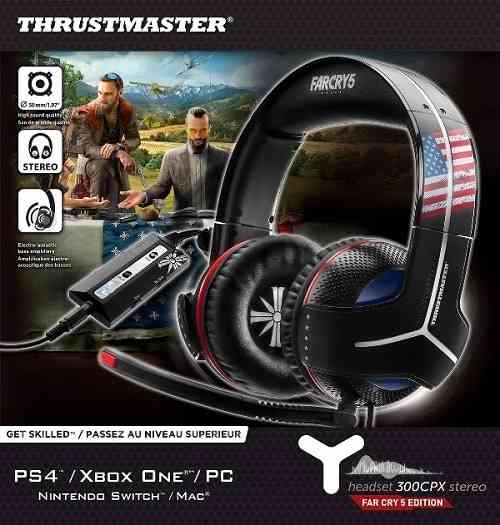