Why is the Yakuza video game series great? There are lots of reasons: the visceral, arcade-y combat, the epic gangster stories, the quirky characters and scenarios – these are just massive games, jam-packed with stuff, fun stuff. But you know what I really like about them? What makes me a lifelong fan of Yakuza and not just a player? Pure cultural voyeurism. The Yakuza game series feels, to an outsider like me, like a window into the modern Japanese soul, a cross-section of all the things – good, bad and just plain insane – that fascinate me about this enigmatic but endlessly charming culture.

So yeah, I definitely recommend you check this series out if you haven’t already, and SEGA has now offered yet another great opportunity to jump in with the Yakuza Remastered Collection featuring 3 titles in one package: Yakuza 3, 4 and 5. They’re not completely re-made from the ground up like was done for Yakuza 1 and 2, but even without the Kiwami treatment, there’s still a lot of improvements to visuals, dialogue localization and even voice acting. Sure, after all this time the three titles are looking a bit outdated, but there’s so much damn content here that this package is a must for new players and maybe even nostalgic veterans.

My favorite of the bunch (and maybe the series) is Yakuza 3, perhaps for the simple reason that it was the first one I played. But no, that’s not the only reason; I’ve played them all now but I still like 3 because of its beautiful balance of opposites. There’s the opposition of the two main locales: the gritty urban Kamurocho (Tokyo) and sunny, tropical Okinawa. There’s the thematic contrast of main character Kiryu Kazuma beating bad-guys to death while at the same time fighting to protect the lives (and innocent childhoods) of little orphans. Like a perfect Yin-Yang, it’s got the light moments to cleanse the palate after intense and serious ones, making it a great experience to play all the way through.

Yakuza 3, like all the remastered titles in the package to some extent, shows its age though, even as a remaster. The controls overall feel like a big step back in time, and if you’ve become used to the most recent Yakuza titles you’re in for a shock. I’d forgotten how simplistic and one-dimensional combat was in this title – even the simple process of moving around took some getting used to, as Kiryu always moves in a pretty fast run, jerking forward awkwardly which can be a challenge when you want to precisely locate him, like in a fight for example. I also remembered well into my playtime that you can only save by the phone booths scattered around the city. I guess there were a few things I didn’t fondly remember and it’s a bit disappointing that the remaster doesn’t offer some new options for modern players. 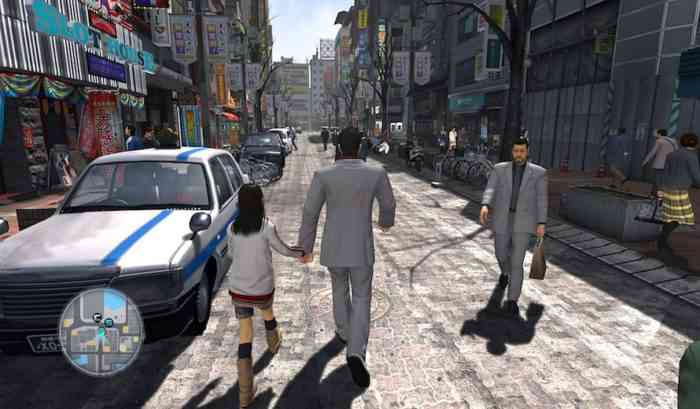 There are some big technical improvements as well, though. Visually all the games are spruced up to 60 FPS and 1080p resolution, which is a noticeable boost and makes each title feel like it could fit graphics-wise with today’s titles, although the results aren’t always even. Character movement is a mixed bag, and the awkward, slow-robot way NPCs walked the city streets broke the illusion of realism often for me, and made me appreciate how far the series has come since. Localization has been improved, and translated dialogue feels more natural – but honestly, part of the charm of Yakuza was its very Japanese feel so I was fine either way.

After the near-perfect Yakuza 3, there’s the much more serious Yakuza 4, which moved the focus from just Kiryu, to placing him in a group of 4 playable characters. Kiryu and the three new characters all have their own narrative thread that is compelling and fun to play through, and the neat thing is they all come together into a climactic final ending. Cynics might complain that the story doesn’t finish all that strongly but you have to admire the writers for their ambition and openness to pushing the series forward into new territory. And each character brings their own unique fighting style to the table, which still feels fun even now. Along with the improved visuals, the remaster brings a whole new voice actor to the role of Tanimura, complete with a new face and everything, so there’s something new to look for if you’ve played this one already.

Yakuza 5 sometimes gets overlooked in the long narrative span of the series, maybe because of its scale – now 5 playable characters, 5 cities, and a huge story that frankly, had me struggling to keep up the first time. It’s the perfect example of how Yakuza’s developers have tried to one-up themselves with each title, but luckily there’s quality as well as quantity. In particular, the side quests and mini-games are an addictive diversion in this one and maybe too much so, as you could spend many, many hours before you even come close to finishing it. I recommend this title for Kiryu’s taxi-driving job, which is actually a very involved taxi sim that is a nice break from the usual beat-downs. On the technical side, you’ll notice in this remastered collection that Yakuza 5 irons out some of the movement and combat issues I highlighted earlier with Yakuza 3 in particular. It’s actually quite interesting to have the games side by side like this and see the evolution so directly.

Overall, the Yakuza Remastered Collection is a gargantuan package of content. There’s hundreds of hours here of just playing through the stories of all 3 games. That doesn’t even mention the hours and hours more that you’ll spend (and you will) getting lost in Kamurocho and the other fully realized urban environments, helping strangers, gambling, playing video games in arcades, getting drunk, fishing, and yes laying smack-downs on those many big-mouthed street punks. Trust me, as a cost-value proposition, it is a no-brainer.

And like I mentioned before, Yakuza’s unique perspective of giving an insider’s view of modern Japanese society, so opaque to many of us in the West, is possibly unmatched anywhere in pop culture. Between Yakuzas 3 to 5, you get a cross-section of so many aspects of the country, not just the Yakuza themselves but J-Pop, family values, the generational divide, the economy, politics, technological change, and on and on. There is possibly no better way these days to experience the many facets – both bad and good – of this complex place than in the Yakuza game series. I’ve never been to Japan but I feel like I know it somewhat just from playing these games over the years.

Having said that, these are last-gen games, and it shows often, especially with Yakuza 3 and 4. NPCs move weirdly. They pop in and disappear awkwardly. Moving your characters can be frustrating. Combat is a bit more simplistic and brainless than in the later Yakuza titles. Visuals are upgraded but like any remaster, the results are uneven and this is certainly not a complete rebuild like Yakuza Kiwami 1 and 2 were. Even so, I still recommend picking this one up whether you’re a lifelong fan or a newbie.

Virtua Fighter 5: Ultimate Showdown Gets the Yakuza Collaboration Pack
Next The Suicide of Rachel Foster Review – What Could Have Been
Previous Granblue Fantasy Versus Review – Deeper Than You’d Guess