The Unexpected Quest is a recent fantasy adventure game by developer Rionix originally released on Steam and now available on Nintendo Switch. It’s a strategy/management sim where you play as a group of dwarves trying to get their lives back together after a disastrous shipwreck and you collect the friends, tools, and resources you need to do so. While The Unexpected Quest might not garner much shock or awe, it makes for a fun and welcome addition to the wonderfully expansive genre of Switch games called “games to play on your couch while you’re watching something else.”

I’m not saying that to be dismissive: Hades is in that category for me, and Hades was my favorite game of 2020. And while I doubt I’ll say the same for The Unexpected Quest by the end of 2021, I did have a fun time playing it. This is largely due to its gameplay, where the basic mechanics of the game are simple and effective. You collect food, materials, and money, which you need to destroy obstacles, explore, and hire soldiers to kill monsters. You point, you click, you collect, and occasionally you fight. It satisfies the monkey urges in my brain, especially when I finally get past a puzzling or expensive part of the terrain. There are genuine puzzles as well, and every level is meticulously designed to allow the player to strategize, hoard resources, and try to decide what route you want to take as you sally forth.

Some of the gameplay elements were a little finicky for me, though. I often had trouble with the controls, especially after an update that took effect about halfway through my playthrough. I now had to use my cursor to use items, which only worked about a third of the time, leaving me to watch a veritable army’s worth of my very expensive soldiers be cut down for want of a health potion. The constant rearrangement of items in my inventory was a drag because of the inefficient way I had to arrange my chest. 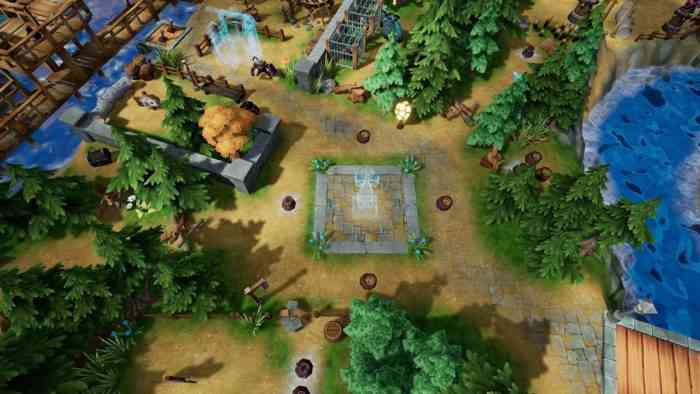 Sometimes I would be rewarded for going an unexpected route with a cool weapons upgrade or some extra materials, but I would equally as often find myself with no money, no materials, and no food; sadly destined to sit there and watch my mills respawn food like I was waiting for a pot to boil. Alternatively, sometimes I would get extremely stuck and find myself constantly collecting materials as I gazed at the map, wondering how to escape the situation I found myself in. The combat is still a work in progress as well, while the inability to assign soldiers more specifically than one per enemy caused a lot of unnecessary deaths in my camp.

Am I Out of Touch?

There is always the point where I worry that it is I that is hopelessly bad at gaming. I fear becoming Principal Skinner, famous for once saying, “No, it is the children who are wrong.” But I think there is real value in only having average skills in certain games: I can tell you that I, as an averagely talented person in the genre of strategy management sims, hit quite a few periods of minor to moderate frustration in The Unexpected Quest that detracted from my experience. Despite all this, I stand by saying the game is an overall fun experience. But I just don’t know what to do with this game’s story. The cutscenes drag, and that’s sad since they aren’t especially long. I could not tell you the plot beyond the broadest details, and it is bizarre to me how involved the story seems to be considering how little it was needed. And when it comes to The Unexpected Quest’s setting, think The Lord of the Rings. Now stop thinking. You have found the setting.

There are dwarves, and mages, and elves, who are maybe the mages and maybe the archers, and there are plenty of swordsmen. Pretty sure there isn’t a woman in sight, though—although considering the source material, that checks out. At one point I’m pretty sure I spotted the exact guard-towers from the entrance of Minas Morgul. I get that Tolkien is a fertile breeding ground for fantasy ideas, but just because it’s popular doesn’t make it cool. I wanted to skip every cutscene, but I didn’t, because it felt like my duty to watch them. They’re honestly difficult to follow because the characters speak gibberish and their lines are subtitled, which gets quickly exhausting as they detail the next stage of their inscrutable plan. If you play this game (and if you’re looking for a fun diversion, I don’t see why not), skip them. You don’t need to know why you’re collecting crystal shards to get the endorphin rush of doing so. 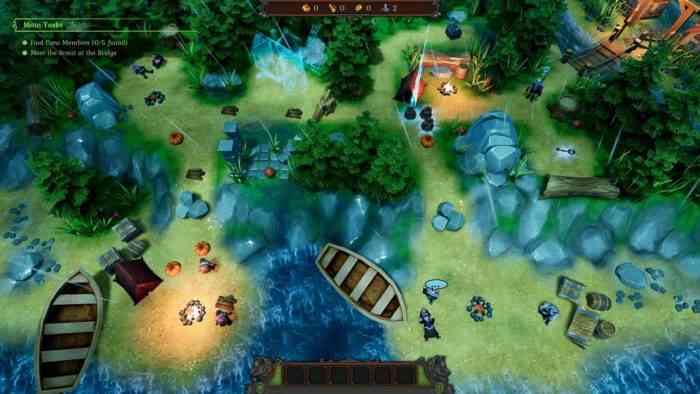 The Unexpected Quest (for a Mobile Port)

The last major point I want to hit is the graphics. I really like the art: I think it’s a very picturesque game that uses its style to its full advantage and comes off as cheerful and inviting. However, I was shocked when I discovered this wasn’t originally a mobile game ported to Switch.

I tried to play the game with my Switch docked exactly once, and I couldn’t follow what was happening on the screen because everything was so small. It was much better undocked, but that’s not how I prefer to play, and it still was a little straining on the eyes even on the smaller screen. I still feel like I’m being gaslit as I endlessly search for evidence that, yes, this was a mobile game at some point. I haunt the Steam page and endlessly type The Unexpected Quest into my phone’s app store, wondering where it is, trapped by this phantom limb this port should be.

Once again, I am not trying to be dismissive: I think mobile games are a hugely undervalued type of gaming, and I think I would have enjoyed this game to its maximum if I’d been able to have it on a phone screen. Yes, I know the Switch is portable. No, I am not bringing it to a doctor’s waiting room. I knew a guy who brought his 3DS to college classes, and I am not trying for that look.

But back to the game. I don’t know what’s going on with the graphics that makes it feel like it should be on a much smaller screen, but if that and the minor inventory, finicky controls, and gameplay issues are handled, it’ll be a more polished version of a pretty fun game. Thankfully, the technical issues seem likely to get fixed since there was an update (sadly, for the worse) while I was playing, but I worry more about the story—if you want to include one in your game, commit to it.

The Unexpected Quest mostly looks good, mostly plays good, and I would mostly recommend it. I don’t know if I’ll remember the game in a couple of months, but I still had a good time with it, even with all its frustrations. It might not be a glowing recommendation, but if you have a fantasy itch to scratch and a little money to blow, hey, why not?

The dwarves are calling your name…

…it’s hard to hear them through the rubble, though, and their voices are soft. They want you to come see what they’re doing, but they don’t want it bad enough to yell. It’s a little insulting. Also, they’re speaking gibberish. You dig at the rock for a little while and give up pretty quickly. Netflix is asking you if you’re still watching, and you need to make dinner. The Mines of Moria it is not.