I get nervous with strategy games. I want to like them but they always stress me out! It’s because I have little patience and am easily steamrolled before I’m ready to fight. SquareEnix’s The DioField Chronicle identifies itself as a strategy RPG. Naturally, I was apprehensive and afraid of what I was getting into. To my pleasant surprise, the strategy mechanics are pretty accessible! The DioField Chronicle might be a bit too simplistic for the hardcore strategy crowd but there is enough content to create form a strong and exciting RPG adventure.

The DioField Chronicle is a high fantasy, sword and sorcery adventure about the plight of the Alletain kingdom, situated on the DioField continent. On the mainland, the Trovelt-Schoevian Empire battles the Rowetale Alliance, with the former gaining rapid ground. The Empire turns its attention to DioField because it is rich with Jade, a crystalline material that fuels the Modern Magic that gives the Empire its strength. Meanwhile, a ragtag band of mercenaries catches the eye of the powerful Alletain official and joins his militia. As the Blue Foxes, Andrias Rhondarson, Fredret Lester, and Izelair Wigan aid the citizens of DioField unaware of the political intrigues and maneuverings they will be indirectly responsible for.

The Empire Strikes Back

The saga of the Blue Foxes plays in and out of the battles they are called upon to lead. The actions that happen on the battlefield and in the empty halls of the militia HQ create drama between the growing party as they get further embroiled in the conflict. The path of the war effort and those affected by it often occurs in between missions, as you’re free to interact with NPCs. Not only do they share their thoughts on current events but their information fills in a lore database that keeps track of the George R. R. Martin-esque world-building. When talking to soldiers, aristocratic officials, and royal researchers, there’s a fun, almost anime-style earnestness to their voiced dialog. They speak in a verbose manner and some are oddly antagonistic. It makes for a loveable amount of cheese that works well against the story’s serious tone. 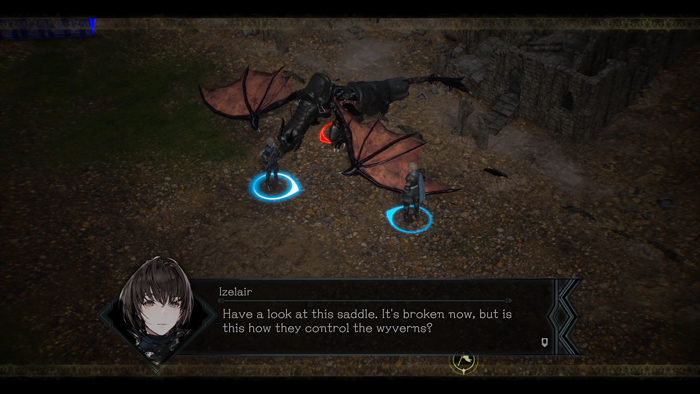 Gameplay is divided into two components: narrative downtime and real-time strategy combat. The combat missions are the game’s bread and butter. Each mission is designed to address the growing threat of the Empire, resolve internal conflicts, and fulfill Duke Hende’s secret agenda. The stakes are pretty low at first. Early missions see the Foxes fending off bandits and protecting VIPs against monsters. The first chapter functions as a tutorial of sorts that teaches the basics of combat, special battlefield conditions, and boss encounters. Once the story kicks into gear and the stakes are raised, missions become more challenging and full of dramatic encounters.

We Band Of Brothers

Unlike traditional, tile-based RTS games, party members can move anywhere on a traversable field. This allows you to easily position party members to take advantage of their strengths. Party members have a line of sight cone that triggers auto-combat when an enemy passes through it. Using line of sight and positioning your units to attack a unit’s flank is the key to earning an Ambush bonus, which increases damage dealt. Defeating a unit head-on is fine but even the most basic foot soldier is capable of soaking up damage. Terrain and the number of enemies in play can impede your attempt to set up bonus attacks. Enemies will attempt to scatter the party and set up their own pincer movements, requiring careful planning and reaction.

Party members require micromanaging for their health and safety. Of the most important tools at their disposal are special skill commands that launch high damage attacks. These can also alter an enemy’s position on the field. For example, Fredret can use his horse to kick an enemy up into the air and run behind them. This is great for those moments when you want to break up a mob and push them into pincer positions. Party members have skill commands connected to their style of combat. Characters like Iscarion and Rickles can summon phantom archers to strike all targets. Izelair has a very useful shield attack that interrupts enemy skills. These skills are managed by cooldowns which adds tension to every encounter.

The party does have an ace in the hole for when the situation gets dire. Each kill fills a Magilumic Orb, a Jade artifact that summons mythical beasts to decimate the field or provide support. Defeating an enemy slowly generates the large amount of points needed to launch these attacks and a handy onscreen medallion keeps track of that progress throughout a mission. Though the game is unrelated to the Final Fantasy series, it doesn’t stop them from bringing in familiar creatures, like Bahumat, to the show. Their summon sequences are a spectacle, as the camera pulls back to those the scale of their attacks on the battlefield. 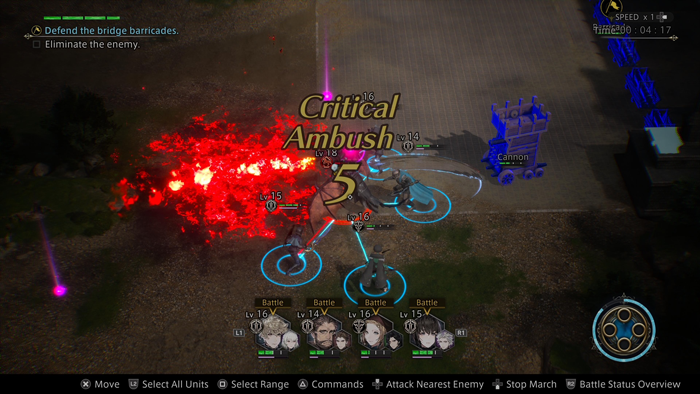 Missions offer a nice variety of objectives, maps, and alternative routes. If each battle were all about hiking to where enemy mobs are hanging out, then this would be a boring game. After the first few hours of the game, missions start throwing some fun curveballs. New enemy mobs will spawn and actively pursue the party, sometimes during the most inconvenient moment. Boss monsters occasionally appear and represent a stronger, more unique threat than the game’s base creatures. Bosses have multiple health bars to whittle down before they are defeated. Boss fights require a steady nerve because of their dangerous repertoire of attacks and command skills. Techniques that worked on lesser foes might not do so well on bigger creatures.  Bosses do a great job of breaking up any monotony because of their unpredictability and ferocious skill set.

The party members you collect throughout the adventure come with their unique skill sets that diversify combat options. You can, however, only have four party members in play during missions. In other games, this might mean having to take time to decide which characters to prioritize throughout the entire game. Here, you can attach characters to party members and use their abilities in combat, which is awesome. It takes away that struggle of deciding who to invest in. Granted, the attached characters earn fewer experience points post-battle, but this is such a useful feature that the difference didn’t bother me.

Each mission has its primary goal (most of the time, it’s to not die). They also come with a series of side objectives that grant special resources as rewards for taking the time to do extra work. Most of these secondary objectives involve the health of the party by the end of the mission but others include finishing the battle in a specific amount of time and finding hidden treasure chests. These are entirely optional but do offer a way to make each mission interesting, especially on harder difficulty settings. 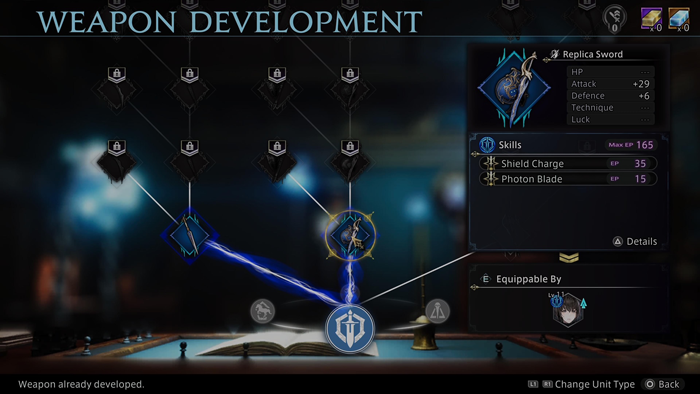 When the battle ends, you’re sent back to headquarters to mingle with NPCs, buy supplies, and research new gear. The Blue Foxes’ base of operations offers plenty of resources to expand the party’s combat efficiency and power. New weapons are produced through financial investments and as rewards for side quests. You also have direct control over the usefulness of services at home. Combat prowess and regular investments increase the rank of different services at home. With each rank up, you earn bonuses money and experience boosts, new gear in the store, and better weapons to research.  Research also unlocks new battle summons. Harvesting materials from mission rewards can boost a summon’s stats and yield new passive bonuses for the party. It may seem drab and empty but interacting with the militia’s resources feels pretty rewarding.

The DioField Chronicle sports a unique visual style during missions that is slick. Sadly, it’s mostly a gimmick. During the battle, you can pull the camera back to get a good overhead view of the map which displays all visible enemies. When zoomed out the mission area takes the appearance of a diorama photographed using the tilt-shift effect. It’s a cool effect but ultimately useless. It’d be more fun if you could play the game in that style but triggering it effectively pauses combat. 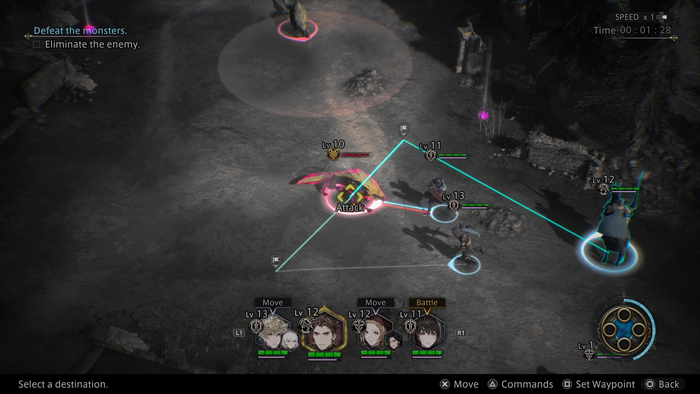 In fact, everything outside of the game’s mission resembles an early PlayStation 3 game. The party’s base is overly large and sparsely populated. The entire structure is a waste of uninteresting real estate and too long hallways. The character models are large and not well animated, their texture models somewhat plain, and the lipsync is questionable. However, none of this is bad. In fact, I loved it. There’s something warmly nostalgic with the dated visual design. It harkens back to the mid-2000 era of 3D RPGs that feels quaint and comforting. Playing through the game, I brought warm memories of playing old-school RPGs back in the day.

The DioField Chronicle defied my expectations. It’s a solid strategy RPG that offers lots of depth both in gameplay and in the story. The Blue Foxes experience all the ups and downs and tragedy that come with war. The story does a good job of highlighting your place in the conflict. I really enjoyed the payoff that comes with developing the party through research. The combat encounters are challenging without being frustrating. In short, I loved this game. I’m surprised that I loved it! I’m not very good at real-time strategy games but The DioField Chronicle is accessible and great fun.

***The DioField Chronicle PS5 key provided by the publisher*** 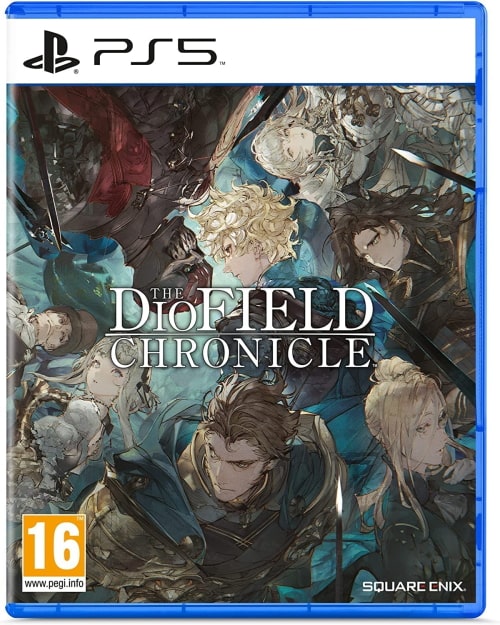