If you’re a gamer of a certain, uh… advanced age, you’ll remember when you first played Doom. Back in the 90s, we couldn’t imagine a shooter being more metal. It was gory, it was fast, and it was an effin’ blast. Advance the clock a few decades, sit down with Prodeus, and you’ll realize just how innocent we were. Badass? Hardly. Prodeus is the game we thought we were playing in those long ago days. But is nostalgia all it’s cracked up to be?

Doom Thy New Name is Prodeus

I know, it seems unfair to keep invoking the D-word, but while Prodeus is its own thing, it’s also deeply indebted to Doom and its shooter brethren. Hell, there’s even a setting to make it look like it’s being played on grandma’s CRT. Prodeus is a full-out, take no prisoners shooter like they used to make. Forget your sensitive heroes and psychological subtext. You blast your way through levels filled with aliens and monsters, grabbing weapons, ammo, and health along the way. There’s even colored keys to unlock inaccessible areas filled with loot and/or progress. Just like the old days. 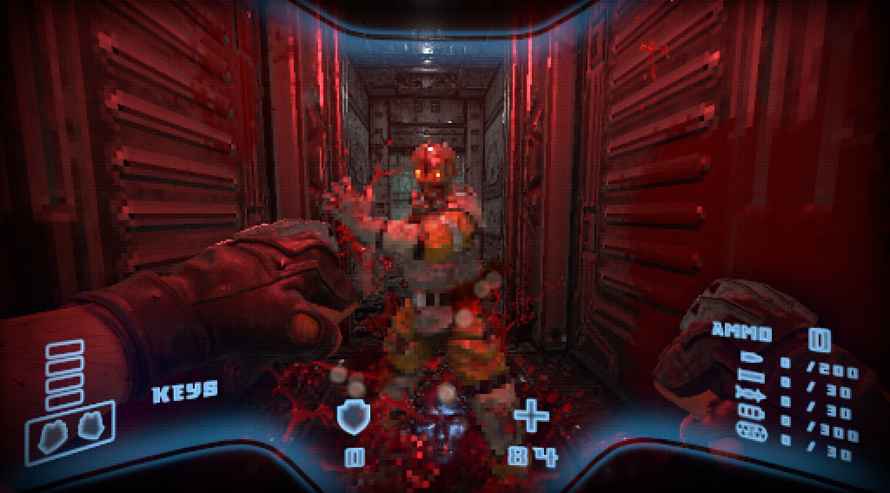 Until later in the game, you fight through claustrophobic halls and rooms, or sprint around outdoor passages. Prodeus’ story is heavy metal hokum. You’re a human cyborg, caught in the battle between the demon Order and Chaos aliens. Really, though, your goal is to everything that moves into crimson colored modern art. It’s not that the plot is irrelevant. You just don’t have time to pay attention to it.

Just like shooters of old, Prodeus gives you shotguns, rail guns, rocket launchers, twin pistols and much more. But shooters have evolved since the 90s, and Prodeus folds in some new-fangled mechanics. Each weapon has an alt-fire mode, and you can upgrade the guns as well. Every weapon is incredibly satisfying to use. In large part, this is due to the kill animations. They are brutal. They’re bloody, gory and much more visceral than the blocky red red pixels of the original Doom. Dispatching aliens and demons just never gets old. The enemies themselves are near clones of old-time Doom and Quake monsters, but with slightly cagier AI and deadlier accuracy. The bosses vary from piece of cake to prepare to die.

The levels are a bit more labyrinthine than anything from the original Doom era. Luckily, there is a useful map. Speaking of levels, the PC version includes a map editor and there is a very large number of user-created levels, thanks to an active fanbase that not only kickstarted the game, but played it in early access. The editor is not for the tech-timid, however.

Prodeus has a wide array of settings that id would have never thought to include in the original Doom. There are lots of ways to dial down (or up) the difficulty and make the game feel either more modern or like a relic from the dawn of shooters.

We’ve talked a lot about Prodeus as an old-school shooter, but graphically, the game pulls off an interesting trick. Compared to original Doom or Quake, there is way more environmental clutter and detail, and the lighting design is excellent to retina-scarring. From frame rates to loading times, Prodeus is a game built on the power of recent tech. The trick is distorting your memory of old shooters, because Prodeus is what they felt like at the time. 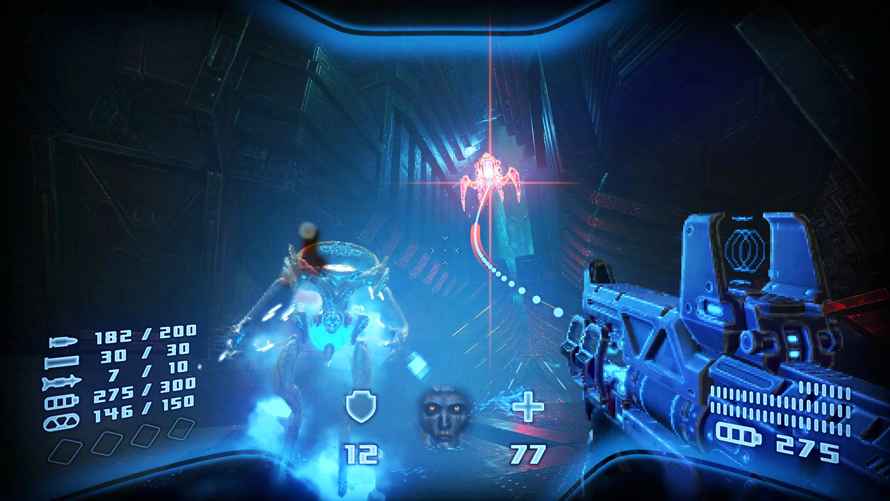 Prodeus has excellent sound design and music. The soundtrack is industrial metal and any gaps in the music are filled in by industrial mechanical noise. It’s incredibly effective but unrelenting. Add to it the breakneck pace, brutal combat, and tension-filled exploration and you have a game that can overwhelm to the point of sensory fatigue. Luckily, the levels are reasonable, so it’s easy to play the 10 hour game in bite-sized bits.

Prodeus’ ultraviolent combat is fantastic if that’s what you’re in the mood for. But even the most delicious meal can sour in the stomach if there’s simply too much. In short bursts, Prodeus not just stands on the shoulders of giants, it dwarfs them. Over hours, though, the incessant action and jackhammer sound design start to feel a little restrictive and repetitive. Prodeus is a near-perfect homage to late 90s shooters, but you don’t need to be a demon spawn of Doom to enjoy it.