The Ascent was originally released as a timed exclusive on Xbox Series X in July 2019 and we loved it then. Now, the timed exclusivity is over and The Ascent is making the trek over to PlayStation 5. While the game is essentially the same game as when it originally launched, there have been some significant updates, additions and patches to the Xbox version over the past year – and all of that content will be available to PlayStation gamers on day one. In some ways, it was probably worth the wait! If you’re looking for a fast and fun twin-stick shooter with gorgeous visuals and some RPG-like elements, The Ascent has got you covered.

On the alien colony world, you are a nameless employee called an ‘indent’ – an indentured servant in the cyberpunk arcology – who takes on jobs and contracts for crime bosses and corporations vying to take over your home. The world is filled with aliens of varying species and all manner of robots. It definitely gave me some Blade Runner vibes at first, especially as the initial credits roll and the camera pans around the massive world. For many, like myself, I imagine the story will simply be background noise to the fast and furious gameplay.

The expansive sprawl is full of dangers to keep you on your toes. Outside of the protected areas, any matter of thug, robot, or alien can attempt to take you out. This is where the mayhem and the fun truly begins. Sure, the game features a lot of rinse-and-repeat gameplay – running around, holding the trigger down, mowing down as many enemies as possible. It’s pure wholesale slaughter at times. And yet, it’s still a blast to play. And as the game progresses, new weapons are acquired providing more ways to make baddies go boom.

In addition to levelling up your character to be stronger and finding new weapons, you’ll also gain access to various mods and augmentations. These mods and augmentations are modded into your body by an alien grafter in wonderfully cyberpunk fashion. These new abilities range from grenades to drones to heavily armed bots all of which really help with your slaughter-spree. 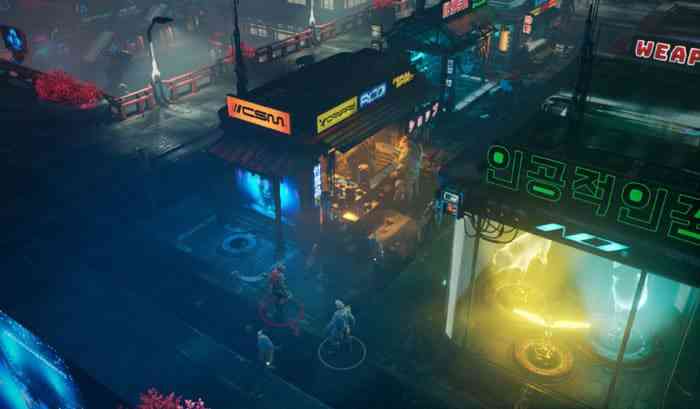 Throughout The Ascent, you’ll find a variety of cosmetic items that you can utilize to create a character that is truly you – or as wacky as you want. It’s not the most robust create-a-character we’ve ever seen, but it does the trick. You can pick your gender, skin colour and adjust your tattoos, clothing and hairstyles. In addition, the armour and guns you can swap in and out are also delightful complimentary to the aesthetic of the world of The Ascent. While not overly complicated, it added a layer to the look of the game and gave me some fun stuff to play with.

The game features a variety of added modes for players to tinker with. There is an awesome couch co-op mode for some added mayhem which, I will say, I really enjoyed. You’ll also have access to a handy Photo Mode for the artistically inclined. And The Ascent also features a New Game + mode for those that are looking forward to experiencing the action another time. PlayStation users will be happy to know that a lot of care went into the haptic feedback for the PS5 controller – a feature Xbox gamers missed out on.

Overall, The Ascent is a fun twin-stick shooter that comes to the Playstation with an absolutely beautiful world design. The wholesale violence is very engaging but may feel a bit redundant as you can be pretty well maxed out about halfway through. I had a lot of fun with The Ascent, especially with multiplayer. It’s a beautiful-looking game that’s a blast to play that’s worth checking out.