I’m a retro gamer from yesteryear; I have pretty much every console ever made to date and play a few faves from the past from time to time.  Don’t get me wrong I also own the newest gaming machines made too, which brings me to the Xbox One and Super Time Force. Here is an interesting marriage of new technology mirroring old gaming. Right from the opening salvo Super Time Force takes you back in time, quite literally. Normally I would talk about the gameplay before delving into the look and sounds of any particular game, but Super Time Forces look is so outlandish and in your face you cannot ignore it.

You will notice the game has blocky graphics on a somewhat washed out color palette. You’ll see details on faces like mustaches or eye patches, but they won’t win any detail contest that is for sure. The level designs are very simplistic too, but yet you can get confused with their layouts. I sometimes found that the lack of detail in the blockiness hinders your ability to navigate around them. It happens often enough to frustrate, but never to the point of not wanting to play.  I  also found the game having a few hiccups in the area of framerate, but that may be just an added nostalgic flavor since it is never an issue. If every retro game looked like this one I would dearly love to play my old games all over again, as it is a 1080p full screen trip back in time. While it may not have the beautiful polygon counts of today’s games, Super Time Force is a visual feast into what games looked like in past years, with a refreshed reimagining. 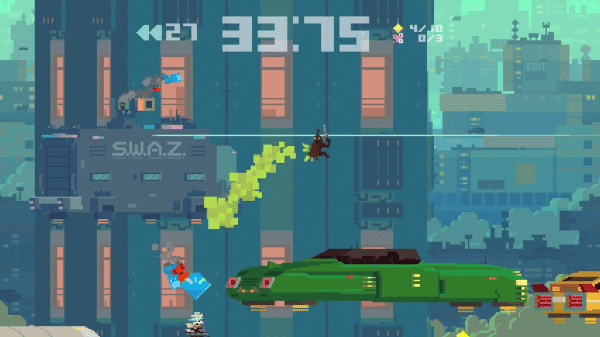 The sounds heard in Super Time Force is equally retro, the mock compression makes the game hiss and crackle with the best of them. Everything from the dialogue to the massive explosions has an old flavor to it, but it is still very enjoyable to newer or younger ears. Without a doubt Super Time Force makes great fun out of making fun of itself.

As quirky and bizarre as Super Time Force looks, and sounds, the gameplay almost matches the mayhem. The core gameplay is a side scrolling shooter in the same vein as say Metal Slug or Contra, extremely fun and chaotic from start to finish. It also allows you to bend time and use your arsenal of characters to help you finish each area. Jean Rambois has a basic shooter which can also be charged up for a rapid fire spread; Aimy McKillin fires bullets that bounce off all walls and ceilings and has a very effective charged shot that goes through walls; and last but not least Shieldy Blockerson rounds out your crew with a reflective shield and the ability to create a protective bubble for a short period of time around himself. As progress through the levels you will begin to amass other characters with specific attributes, unfortunately they die with one hit although they are extremely helpful in hectic situations.

Super Time Force starts off with a certain amount of rewinds at the beginning of each level. You can find more scattered throughout the levels in the form of clocks, diamonds and shards left behind from enemies and objects. It is a bit frustrating to lose your crew but they will help in finishing off a tough boss in the nick of time. 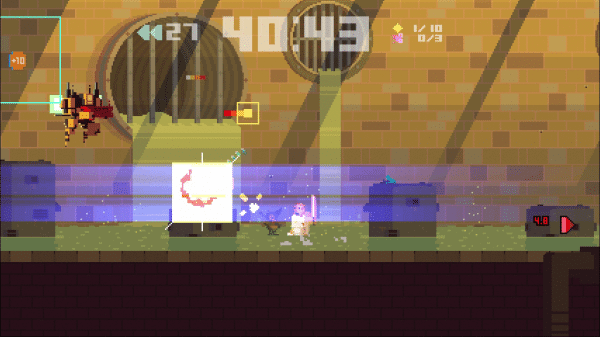 Another twist to the game is your time count. You only get a certain amount of time in each level. This cruel irony will haunt you in the beginning stages. As you venture on though there are more clocks scattered about the levels, which can add to your overall time. The hair pulling part is you can run out of time right at the very end of a stage or level. Even rewinding back to call up your crew may not help you as the time seems to just vanish. I actually walked away few times as I just could not finish in time and I wanted not to hurl my controller at the screen.

Within the mayhem you have to figure what weapon or character is going to help you the most and then try to utilize them accordingly. After a fairly steep learning curve figuring out the games patterns and rhythms I finally started to make a good amount of headway. So to those noobs out there, stick with it, as it does get better. Complicated and daunting as it may sound, the game does a fantastic job of helping you learn the basics in such a way that anyone can pick it up after the tutorial mission and start to get through some early missions.

There are a few things that did annoy me about the game. The controls, as intuitive as they are, can be very unforgiving. I frequently found myself not being able to jump high enough out of certain areas and getting used to the aim lock button is truly tough. The lock button lets you concentrate your fire on an enemy or certain area; the issue I had was I couldn’t direct my player and aim properly at the same time. Again, it is just a matter of getting used to the mechanics of the game and over time the aiming did not bother me as much as it seemed early on. I do admit that I really felt as if there should have been a double jump feature, it would alleviate most of my issues with the control. 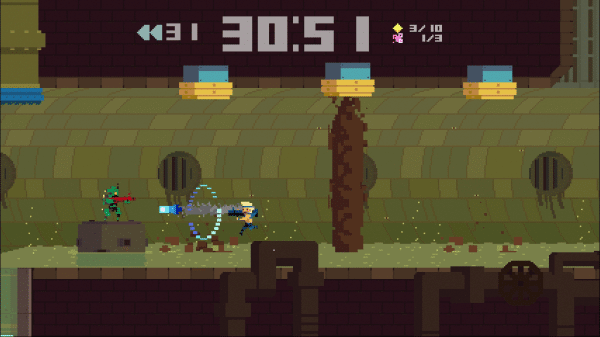 I did find that there were some areas that were not always the easiest to figure out how or where you need to be. The blocky retro art sometimes hinders vision, at times hiding doorways or areas needing blasting through in order to progress. The issue is never a deal breaker but time is always ticking down so dilly dallying around can be a bit frustrating. That being said, my biggest gripe, if you can call it that, would be the dialogue boxes, they are at the very least quite annoying and can be skipped, but you may run the risk of missing something important so weigh your choices out well.

Super Time Force can take anywhere from 6 to 8 hours to run through, but there other things to do. There are all kinds of secret areas to be discovered along with medals and other collectible stuff, it is almost impossible to grab and find everything in a single run through. There is also an insanely difficult Super Hardcore mode to run through and a super competitive leader board incentive to think about. Overall you could probably bump playing time up to and over the 30 hour mark, great value for a downloadable title.

I find it kind of ironic to have a pixilated old school themed shooter find its way on to a shiny new and very powerful Xbox One console; however, Super Time Force represents itself commendably. It gives some the bigger titles a run for their money in terms of playability and fun. Sure, the learning curve can be a bit steep and the look and feel may turn off some newer gamers but the rewards are sweet enough for everyone to love this quirky downloadable title.