Tomodachi Life (3DS) Review – Who Needs Friends When You Have Tomodachis?

Of all the games I’ve been assigned to review, Tomodachi Life has actually proved to be the hardest. It’s not because the game itself has been overly challenging, and it’s not because I haven’t enjoyed it. No, it’s actually a great experience, albeit a strange one. The problem stems from its very infrastructure, the very nature of its being. And what is that you may ask? Tomodachi Life is the most truly bizarre and random game I have ever played. In fact, reading various words from a dictionary might serve as a superior review than I could ever hope to lie forth. “Sombrero. Yellow buffalo pineapple concrete. Kidney pogo-stick? Table plug path. Marmalade domino hood scallywag”. This will be your Tomodachi Life experience.

Anyone who has spent some time with games like Animal Crossing or the Sims will find themselves immediately at home. When you boot up the game you are dropped off on an empty island with bare land plots everywhere. You are immediately asked to make or import a Mii from your 3DS as you are the islands first resident. Miis can be anyone from your best friend to family members or even celebrities. In fact, the game actively encourages that these Miis be those of people you know. There’s an extra layer humor when Miis of those who you know engage each other in completely uncharacteristic manners. The first structure to open up on the island, which you will be prompted to name, is an apartment building, after-which you can continue to make or import more and more Miis to fill up your Island. 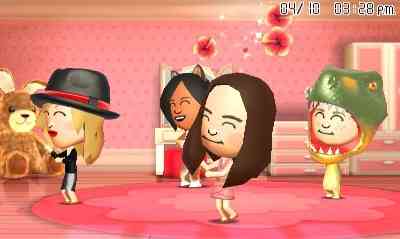 The bulk of the gameplay in Tomodachi Life is in how you choose to look after all your Miis. In fact, you will more than likely end up spending most of your time staring at the apartment building waiting for one of your little friends to flag you down and ask for something. You need to feed, entertain, clothe, cheer up, calm down, or even set them up with friends. Miis of opposing genders can even fall in love, get married, and have children later down the road. This is especially comical if a Mii that resembles the fiancé of one of your friends just happens to marry one of your other friends. I of course would never intentionally allow for this to happen in my game file and then tell said friend about it. Never. Never ever. Okay, it was really funny.

Not too long after you get your first couple of requests for food or hats you’ll begin to see various shops open up all over the island. Each shop will feature daily specials that can be purchased on that day only. Of course, if you do buy one of these that item will be added to a permanent back-catalogue that can be accessed at any time. Every day that you play you will see the store restock with different daily specials. The level of diversity of food and clothing is core to the gameplay as each Mii has his or her favorites and least favorites. They’ll express to you in very emotive, and sometimes hilarious ways, just how much they like or hate what you’ve offered them.  Finding things that your Miis like isn’t actually required, but it has its benefits. Miis earn experience each time you fulfill a request they’ve made. The more they like the outcome, the more experience they’ll earn. Each time a Mii levels up you can give them one of various rewards that can include a new catchphrase or one of several items that they can interact with while they are in their apartment.

You and the various Miis will interact in many different ways. They’ll commonly ask you to play games; some of which include picture matching and trivia about other Miis on the Island. Winning these games will earn you prizes which can be sold for in game money. You can also dive into your Miis heads at night and see what they are dreaming about. The Miis themselves will have chats among themselves while at the beach, park, hanging out at each other apartments, and they will even sing concerts solo or in a group. And twice each day one of your Miis will do a news broadcast about something strange and bizarre that happened on the island. Beyond that the gameplay doesn’t get much deeper. Tomodachi Life is a game that should be played in short bursts. There isn’t a whole lot of content for an actual “sit down and play” session. I made a point of doing that during much of my gameplay and found that things got quite repetitive and I spent most of my time just waiting for islanders to ask chores of me. There are only so many times I can feed my look-alike pancakes and still have fun. 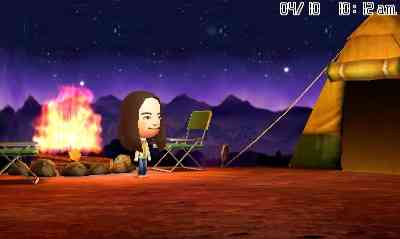 If you’ve ever seen a Mii character you’ve already got a pretty good idea of what the game looks like. It’s a heavily stylized, if not simplistic, colorful game. The impressive bit isn’t the Miis themselves, but the environments you can put them in or the clothes you can dress them with. In the time I’ve spent with it as I was writing this review I hadn’t come across a single repeat item in the shops. And of the vast array of clothes you can buy each item features several color variants. I still don’t know how many different apartment styles there are or just how many different kinds of food there is though. The overworld, like the art itself, isn’t overly complex. It’s a small Island with little buildings that represent places your Miis can go with each destination being a small but fairly detailed environment. Visually, It’s really nice to look at, and I couldn’t find a problem anywhere, but that brings me to the sound.

Tomodachi Life is a game that definitely falls into the cute category, including the music. Shop tunes, the happy little fanfares that play when you give a Mii something cool, and even the rap battles that happen at the fountain. Most all of it plays out without a hitch…with one exception: the voices. From a technical stand point it’s really cool! Everything said by any character in the game is fully voiced and read back to you in a sort of robotic voice. The preset voices sound really good (still robotic mind you), but the problem being when you start customizing voices. When you go through the Mii creation process, one of the steps it to choose a voice. Custom voices have you adjusting five different sliders, each with different effects. Some combinations of these can cause strained sounds that come out as screeches, which are a little painful to listen to.  It should also be noted that in addition to the five sliders, you can choose between four different types of inflection, which will further diversify hour your Miis sound.

I walked into Tomodachi Life expecting nothing and walked out having not regretted a moment of it. It’s a game unlike anything I’ve played before. It’s laid back and it’s a good, clean, silly-fun game that will no doubt appeal more towards a social like audience. As for the hardcore gamers out there, I issue you a challenge: pick up Tomodachi Life, whether you rent, borrow, or play some form of demo, and tell me you haven’t cracked smile. Tomodachi Life is loaded with Nintendo charm and the perfect kind of wind-down-after-work game that reminds me why I started playing games in the first place.