Transistor is Supergiant Games’ second title so far and follows in the footsteps of its predecessor, Bastion. This beautiful action RPG replicates the combat and movement style of the first title but with a twist that really sets the two completely apart from each other. Players control Red, another silent protagonist accompanied by a talking sword-like device, the Transistor, as they fight back against the mysterious Camerata and their new weapon, the Process.

If you’ve played Bastion then the controls will feel familiar, as Supergiant seems to be making good use of their in-house engine. Everything feels tight and responsive with no noticeable input lag, while the addition of the ability to stop time and plan your attack helps dial down the pace for a moment when situations get a little hectic. 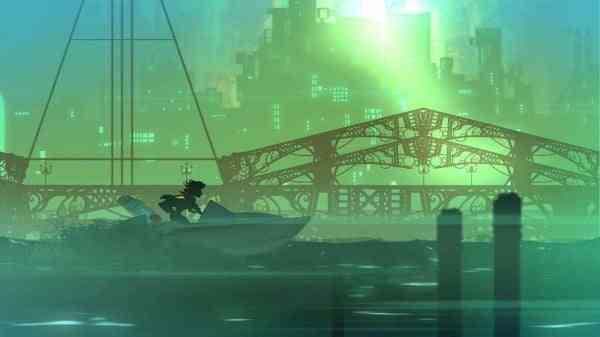 The Function system allows players to customize Red by assigning abilities to one of three locations: Active, Upgrade, and Passive slots. Active slots are the base abilities and you have one for each face button; they can then be upgraded with other Functions to alter the way the Active Function works by simply increasing damage and blast radius, or changing the functionality altogether by adding a charm effect. Users start with one Upgrade slot for each Active one, and can later unlock an additional slot for each Active ability. To top it off, there are four Passive slots which users can insert Functions into to improve Red’s own abilities, like increasing her health or giving her a temporary shield. The customization and combinations here are staggering, allowing for a very diverse play-style. Several times I was having trouble with an encounter and simply switched my Functions around, only to find different combos that wrecked the opposition where I once quickly fell.

Dying is interesting in Transistor. Players who die are punished by having a Function removed from one of the four Active slots, and when all four are gone, you get a game over screen. This was so interesting because all of a sudden, maybe you lose Jaunt (a dashing ability) and you can no longer dash away. Or, your primary attack that all your memory was sunk into is no longer an option. Luckily, the difficulty is only tough if you choose for it to be. Similar to Bastion’s idol system, Transistor uses a system that, depending on how well you are performing, will increase the difficulty as well as experience gained by throwing in passive bonuses to the enemies, like double damage or armored cells. 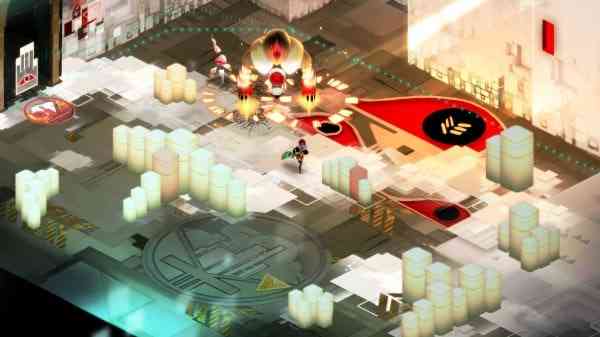 As for the story, Supergiant followed up and delivered. Transistor doesn’t quite use the same narration style as before, but still maintains a silent protagonist and tells the story through imagery and the Transistor, Red’s companion, who comments on the world around them. Not only was this monologue engaging, but it helped give great exposition without feeling mundane or contrived. The tale itself is interesting and a nice break from some of the more classic scenarios, however I’ll simply say that Red is out for revenge against the Camerata, a group of individuals in control of the Process: programs that manifest physically and are attacking the city. The whole game took about 10 hours to complete, and I always felt compelled to carry onward into danger.

The AI functions great for the most part, with a good variety of enemy types. The learning curve is well planned, with most new enemies introduced first as bosses usually fought alone before having to deal with a whole group. The Function combinations really let Red kill her enemies in style, and I felt that the encounters were balanced well against most play-styles. Players can also practice against dummy AI in the practice arena found through Back doors which lead to sort of a central hub area in which the player can relax, hit a ball around, or attempt to complete any unlocked challenges.

The challenges, accessed through doors atop an old tree, give players a chance to not only test out different Functions but help hone your combat skills and tactics. They each have a different goal, like kill all the enemies in the allotted time, or defend yourself using the Functions provided and each challenge unlocks a piece of music that can be found throughout the game and played in the Back door area. 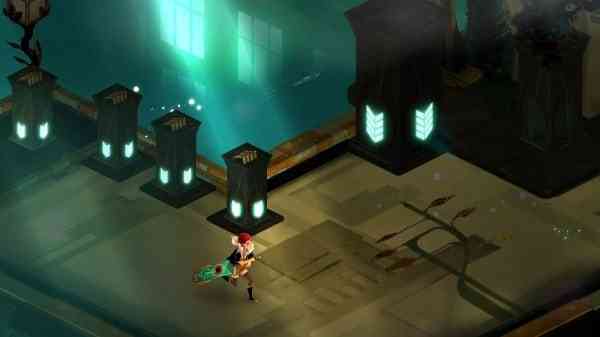 Transistor features a gorgeous art style, filled with vibrant colours and soft lighting. The most common theme is red and green; a nice change from the orange and blue that fills most colourful titles these days. The setting is a futuristic city, and thankfully the artists at Supergiant decided to go big or go home: everything is hand-painted and looks beautiful in 1080p. The Process maintain a palette of white, greys, and black to really help stand out from the environment and let the player see where they’re going. Visually stunning, the game offers a ton of opportunities for nice new desktop backgrounds to anyone interested in grabbing some screenshots.

Particles play a huge role in Transistor, and they look amazing. It feels great to set up a huge attack on a ton of enemies and then watch Red dash around the battlefield, particles flying all over the place. The attack animations in general look well done, including the little flourish players can do by tapping the right bumper. The left bumper dims the lights and makes Red hum, which doesn’t seem important and yet I often found myself looking for areas to try it out and see how it changed the visual style of the world around me. The lighting in itself is fantastic, painting fog and buildings in soft shades of colour. The artists demonstrate great colour theory knowledge, and illuminate a dreary setting with style and whimsy.

Not only does Transistor have a hauntingly beautiful soundtrack, but you can purchase it with the game for an extra ten dollars. I initially thought against it, but I now find myself staying in Back door areas, playing track after track in the background as I write. The tracks played during combat and before tense situations are great as well, and give the player a sense of urgency without feeling removed from the experience. 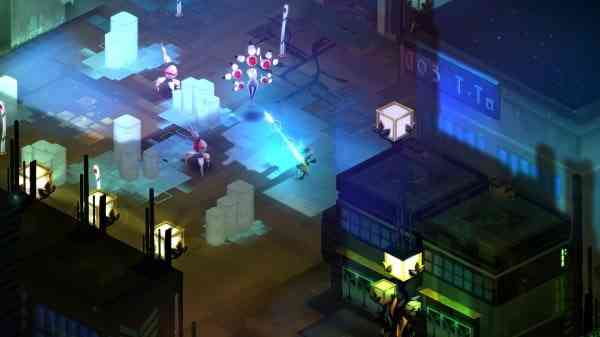 As for the voice acting in Transistor, Supergiant raised the bar yet again. The Transistor and a few other characters are the only voices in the game, but they all do a great job at portraying emotion and feeling. While they aren’t quite as unique and memorable as Rucks from Bastion, the added touch of different emotions really helps sell the characters themselves. And unlike Rucks, they never feel monotonous or tiring. All of this is of course backed up by the game’s sound effects. For the most part, they’re quite fitting and make the player feel powerful and badass during fights. My only desire is that the Functions sounded a bit more intense when they’re combined with others, as right now I feel that Red sounds just as destructive at the start of the game as she does near the end.

Transistor is a great way to spend twenty dollars if you’re a fan of action RPGs, strategy games, or just anything Indy. It is a wonderful single-player experience, and I highly recommend escaping for a day into the colourful city of Cloudbank. While it has the capabilities, it probably won’t appeal to those looking for twitch-action or puzzles. Still it deserves a chance to steal your heart, just as it stole mine. The only thing missing is more content.

Next Tomodachi Life (3DS) Review – Who Needs Friends When You Have Tomodachis?
Previous The Wolf Among Us Ep 4 “In Sheep’s Clothing” (Xbox 360) Review – The Plot Thickens…