Up until this point I’ve had a sort of self-imposed rule that forbade me from directly referencing the title of a review. Titles are waaaaaaaaay cooler when they are only sort of related to the topic and charmingly appropriate. Today I break my rule. My experience with point and click adventures have always been akin to those damned “Where’s Waldo” books. I can never find anything. In The Whispered World Special Edition you follow Sadwick, the sad circus clown, and his trusty caterpillar companion Spot. Tired of the circus, and tired of a boring life, they set off on an adventure.

Above any other genre point and click adventures are the kings of simple gameplay. If there’s a place you want to go to, simply click it. Is there an item you want to pick up, or a person you want to talk to…click it! The Whispered World doesn’t do much to differentiate itself from the standard in this regard, but that’s okay because it doesn’t need to. The old saying holds true, “if it isn’t broken, don’t fix it.” The Whispered World does however do something interesting in the form of your caterpillar companion Spot. Spot functions as sort of tool that you can use throughout your adventure to overcome various obstacles. At different points through the game Spot will get different “shapes” that he can shift between. Depending on the shape you have him in he’ll be able to reach things that you normally would be able to get to, such as squeezing into small spaces. As is common with most games in this genre, you have an inventory of goodies that you pick up along the way. These are accessed by right clicking your mouse. To use them simply click on whatever it is you want to use it on after you’ve selected it in your inventory. 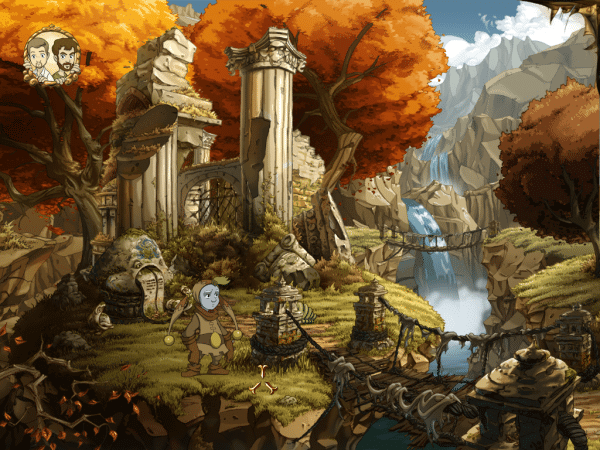 While the game seems pretty standard fair in gameplay it really shines in visuals. The landscapes are absolutely stunning. I found myself anticipating moving onto a new screen just to see what it had in store for me. Additionally, they really do give you a great sense of scope. This is a vast world you’re travelling and many places have an interactive element where the environment changes depending on what you change or take. The artwork done on the characters is given just as much love. The animations are smooth, interesting, and sometimes goofy. Spot especially seems to be a point of humor. In fact, if you have Spot selected for use, then scroll over where Spot is on screen, he’ll start dancing and wiggling gleefully.

It’s hard to have an epic adventure without some epic music to go along with it. And while the music does indeed take a great swing at an epic feel, it seems to fall just short. It’s by no means bad; it just feels a bit repetitive after a certain amount of exposure. The nature of the point and click genre is visual puzzles; matching “keys” to the locks in front of you. This sometimes means long periods of head scratching, which in turn means listening to a lot of the in game music. There were times when I considered turning the music off for my own sanities sake. Another thing I noticed was that the voicing often clipped over itself. The next sentence would begin before the previous one ended. While that did little harm to my overall experience, it was a tad annoying. That said, Sadwicks voice was a point of great entertainment for me. The voice work in general was done very well, but Sadwick specifically sounded a little like Cartman (South Park) with a lisp. Funny Stuff! 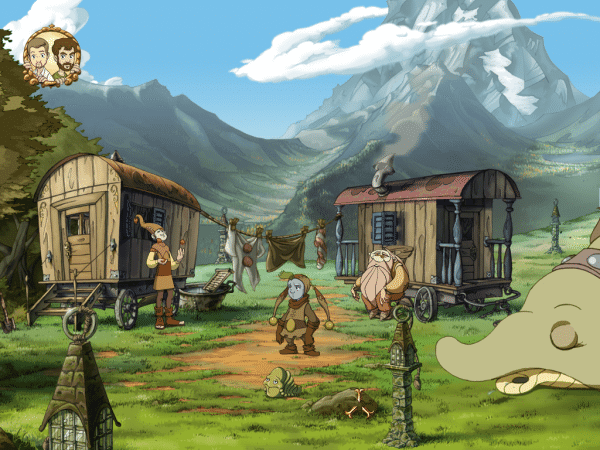 As far as games go, The Whispered World Special Edition isn’t going to blow your socks off. It’s a safe, almost comfortable title that takes one of the oldest forms of gaming and polishes it up a bit. It’s far from your modern day action, racing, or shooter; which is a good thing in its own way. There are very few games where which you can truly unwind with and this one does a good job with that. With its slow pace and an emphasis on adventure and exploration, it is a great game for anyone who isn’t traditionally a gamer, or someone is maybe looking for something a little bit more laid back.