The PS Vita is a fantastic portable system.  Generally speaking, I am not a handheld guy, but the Vita fits my needs perfectly.  It boasts a sleek design and, for a new system, it has quite an extensive library of games.  Having already put Shinobido 2 under its belt, developer Acquire now turns to Sumioni: Demon Arts, a unique platformer that takes advantage of the Vita’s touchscreen and rear touch pad in creative ways.  Sumioni is a distinctive and visually pleasing experience, but it is not without its faults.

In Sumioni, you take control of Agura, a demon who uses ink as his primary weapon.  A large feature of this game is the ability to paint the screen with swipes.  This creates temporary platforms that can bring Agura closer to his objective.  Melee attacks are available, but there’s generally a strategic approach that must be taken in order to get Agura in the right spot to land a hit.  That’s where all this line painting comes in.  To defeat an ordinary enemy, the melee attack generally does the job; however, for most more challenging foes, the platform creating becomes a necessity.  This is exciting at first, but even before the half-hour mark, around which the first ending will generally kick in, the flavor starts to disappear. 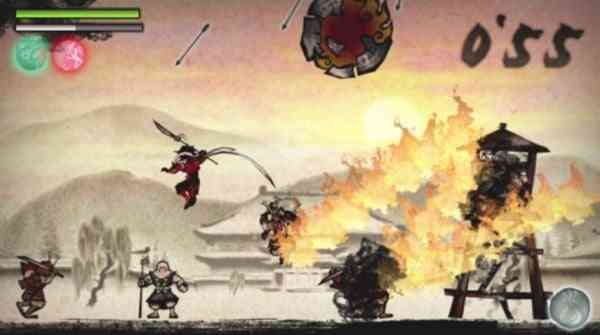 Controlling Agura is straightforward enough; use the left analog stick or directional pad to move around, X to jump, and Square to slash.  Special button combinations can be utilized during the heat of battle to execute more powerful moves, though relying on the most basic attack seems to be the most efficient tactic.  As described earlier in this review, swiping one’s finger across the screen allows for an ink platform to appear.  Doing so consumes ink, which can be refilled by finding ink vials in the environment or by vigorously rubbing the Vita’s back touch pad.  When caught in a particularly tough spot, Agura can also summon the help of a giant celestial creature by tracing a randomly generated symbol on the touch screen.

With all of its intriguing elements, Sumioni immediately sets itself apart from other 2D platformers.  Unfortunately though, Sumioni’s repetitive and poor pacing really hurts the game.  With 30 stages available, it may initially sound as if there is a lengthy campaign awaiting players, but these numbers are not an accurate portrayal.  The game does contain several different endings, but to discover how to access the alternative stages, and their respective endings, is obscure.  After playing several early stages over and over I finally discovered that players will have to earn perfect three star ratings on stages which will then branch off into multiple locations, allowing for a deeper plunge into the game’s later levels.  By completing any given stage as quickly as possible, while taking as little damage as you can, you’ll work your way further and further into the in-game map, gaining access to the more difficult to achieve endings which are protected by increasingly powerful foes.  This setup works well when understood but it is not explained adequately during the game.  On top of this there isn’t much of a reward for the player who soldiers through to these alternate endings.  This unintuitive design choice quickly overshadowed the fun I was having.  After tackling the same types of stages over and over again with the same enemies and boss types, you will simply lack the will to see things through to the end.

Sumioni’s interface also presents some problems.  Following a stage, the game will prompt you to save your game and the menus can only be navigated via the touchscreen, which seems a little clumsy.  It should be noted that it is impossible to go back to stages at will too as you have to start at the beginning of the stage over and over again and work through everything to get the necessary ratings.  If you fail to get the appropriate rating you’ll need to hope you didn’t save earlier so you can go back to where you need to be, otherwise be prepared to do it all over again.  To put it simply, Sumioni becomes more work than fun.  All this drudgery could have been avoided if the developers had given us a stage select screen. 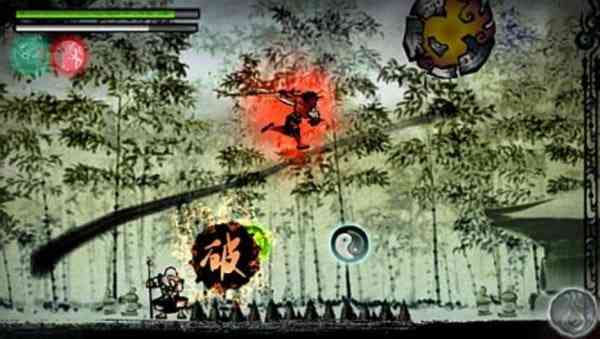 One of the strongest aspects of Sumioni is its visual style.  It looks remarkably similar to actual paintings from ancient Japan, and even the player’s strokes across the screen look like they were painted with a Japanese calligraphy brush.  Characters, backgrounds, and the environments as a whole are absolutely beautiful. Animations are kept simplistic, but also retain a clean, smooth appearance.  The audio is thematic to the game, and is very pleasant.  The corresponding sound effects that cue upon a menu interaction, or when summoning a creature, are well placed and appropriate.  The music is also fitting, with flute filled tunes playing as Agura progresses through the different stages.  I do admit that nothing in the audio really stood out, but this isn’t necessarily a bad thing, as all the sounds seemed natural and well placed in the game

More often than not, games fail for a lack of mechanical soundness, but in this case Sumioni: Demon Arts’ weakness lies only in its lack of sound game progression.  It’s a shame too, because if Sumioni presented a more linear and coherent experience, it would have been a much more enjoyable game.  That being said, Sumioni: Demon Arts is a gorgeous game that offers a unique, albeit slightly flawed experience.  The frustration of its forced, repetitive gameplay that must be endured to see all it has to offer is a poor design choice.  While the price point of $20 is appealing, a simple stage select or a modern save system would have vastly improved the experience.