To parody, badly, from Robert Duval in Apocalypse Now: “I love the smell of chainsaw exhaust in the morning, it smells like Victory.”  Fans of Epic Games’ insanely popular Gears of War 3 may have mixed feelings about the latest DLC “Forces of Nature.” Will they feel victorious as they rip through the five new multiplayer maps chainsaws revving, or will they feel let down, because it is reported to be the final installment of DLC for the Gears of War series?

As the DLC’s name suggests, Forces of Nature features some sort of environmental effect to the five multiplayer maps. There are three brand new maps including Aftermath (players slosh through a flooded city), Artillery (watch out for the tornado) and Cove (can I hear a fog horn?).  There are two returning maps from previous Gears games as well; Jacinto (rain and Imulsion assault you and your opponents) and Raven Down (snowstorm anyone?).  All these maps are playable in both Horde and Beast mode as well as versus multiplayer.  Forces of Nature also sees the return of the fan favorite Guardian versus mode.   For those new to Guardian mode, this throwback to Gears 2 gives you and your teammates infinite re-spawns as long as you Leader remains alive

All five maps maintain the high graphic standard set by Gears of War 3 as they offer the required cover of chest-high walls and choke points force close quarter combat.  The DLC also includes the now expected multiplayer character unlocks, and this time around we have the Savage Hunter, the Savage Grenadier Elite and new versions of Commando Dom and Mechanic Baird. Forces of Nature includes a few weapon-skin unlocks too.  There is also an additional 250 gamerscore points for those achievement hunters out there.  It is all available for 800 MS Points on the Xbox LIVE Marketplace or free to the holders of the Gears of War 3 Season Pass. 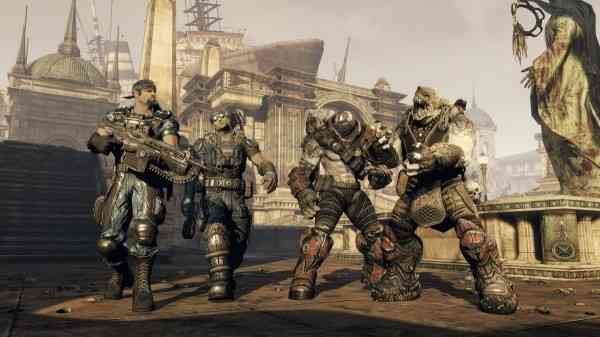 The first map I played was the reimagined map Raven Down from the first Gears game.  The first thing that struck me was how bright it was compared to the original map from the first Gears.  It should be noted that the one similarity of the Gears 3 Raven Down and the first Gears version Raven Down is that it is the smallest and tightest map of the Forces of Nature DLC.  It offers little cover and I would expect the map to be exceptionally challenging when playing the higher waves of Horde and Beast modes.  My Guardian matches were pretty wild as we tried to not only protect the leader but also unleash mayhem on our opponents.  To say that this map is a must play for the shotty wielding player is a bit of an understatement!

Next I played Cove, and man is it foggy.  As with all of the new maps, the mid-point of the match is when you really need to be aware of the changing environment.  I played Cove in Horde mode and my visibility was cut to almost zero.  For example, I could hear the Boomer but he was sure tough too spot until the flash of the Boomshot gave him away.  I found that Cove gave me a chance to exercise my more stealthy means of gameplay.  Under the shroud of fog I was able to sneak up on my Locust enemies and flank them allowing me the opportunity to perform an oh so satisfying  execution.  That being said, sadly I found myself getting pwned with some regularity as I turned a corner and faced the barrel of a shotgun poking out from the mist.  Cove was a pretty cool map indeed.

Jacinto is a map that will have you diving for cover, not so much to escape the tirade of your opposition but to escape the Imulsion-steeped chopper and the accompanying rain that will do little to cool your burns. While Jacinto has you hunting for cover, it also offers a significant number of hidey-holes the provide protection while offering some natural defensive points.  This was a great map for some back and forth play, and at times some reckless abandonment was in order. 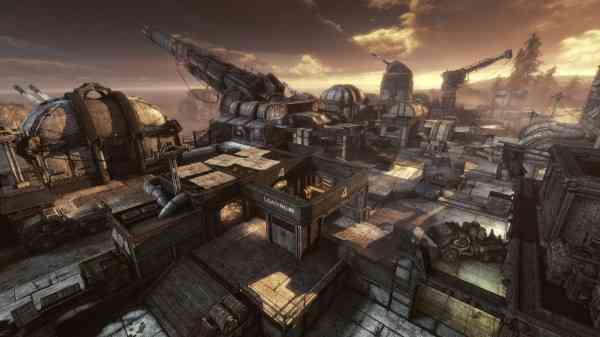 I found Artillery to be the largest of the maps, and it is the one map that team dynamic is a must. If you want to gain the upper hand and rush to the One-Shot bunker in the centre on the map, team communication is key, as a few teammates will be best served covering the squad from the opening Silo doors; but when you hear a loud tornado siren go off, look out as a large twister sweeps in from behind and circles around unleashing a lightning storm in the process. Sticking together as a unit will win the day though as while the tornado whirls around you can watch out for each other while taking down your enemies.

The gem of all the maps may be Aftermath. The map is tailor-made for Guardian mode.  Where the aforementioned Artillery forces unified squad movement, Aftermath encourages the sniper in us all to take advantage of the high ground and look for that opportunity to headshot the opposing leader. Taking the high ground may be the tactical advantage not only for the Sniper, but it is the only path you can take to escape the flooded streets.

No matter which map you play, be sure to hunt for the Elemental Cleavers on each one by interacting with the environment in Beast Mode.  Wielding one of these magical weapons will bring a whole new meaning to melee attacks.

As a Season Pass holder I feel that I have gotten my money’s worth (or MS Points worth as the case may be).  From Ramm’s Shadow, to Fenix Rising, to Horde Command Pack, and now Forces of Nature, Gears of War 3 has been my favorite of the franchise and it just keeps giving and giving.  It is my hope that Epic Games will listen to the fans of the franchise and serve up more DLC to keep it fresh and alive.  Whether Forces of Nature proves to be the Gears trilogy “Swan Song” or not, it is certainly worth downloading for the pure “blood-lust” pandemonium that it is and Gears fans and third person shooter fans alike will just love it.